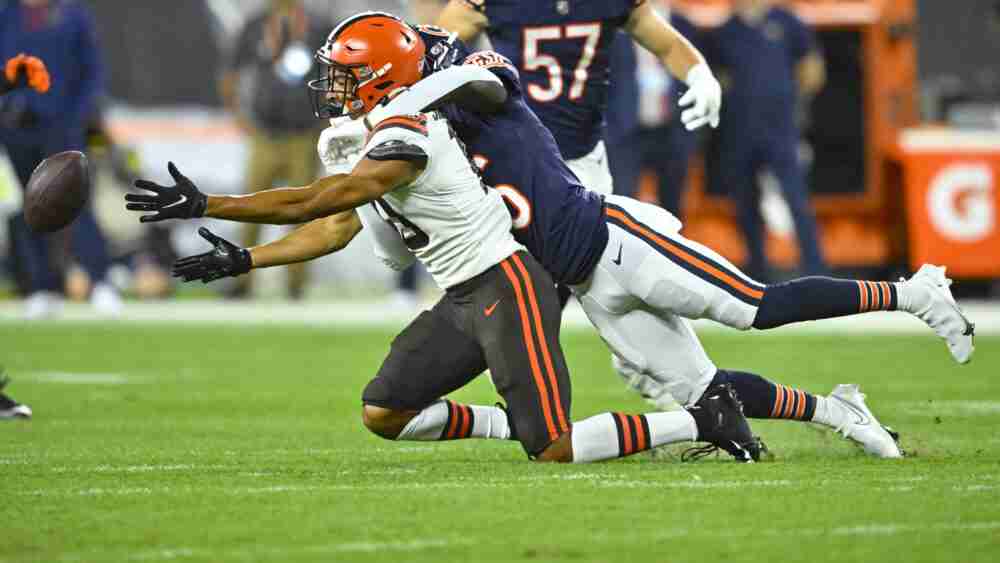 He dropped two more passes Saturday night in the 21-20 loss to the Bears in the exhibition finale, bringing his drop total to five through the three games.

Jacoby Brissett doesn’t get much help, manages only 3 points in 21-20 loss to Bears in preseason finale

The page will officially turn to the regular season Sept. 11 against Baker Mayfield and the Carolina Panthers. The fresh start could be good for Schwartz, whom coach Kevin Stefanski said isn’t in jeopardy of getting cut, but it also brings a much brighter spotlight. Even in a game that didn’t mean anything, Schwartz was booed by the hometown fans after the second drop Saturday at FirstEnergy Stadium.


“We have talked about Anthony. Anthony has spoken to you guys. He is very accountable,” Stefanski said. “I know he wants to be better. I know he will work very hard.”

With No. 1 wideout Amari Cooper getting the night off, Schwartz started and played the first half, catching one pass for 8 yards on six targets. The non-catches were eventful and often ugly.

On the first play of the game — quarterback Jacoby Brissett’s first of the preseason — Schwartz dropped a pass on an out route. His next chance was a deep corner route and he couldn’t make a one-handed catch on a nice throw.

Schwartz then made his 8-yard catch on a crossing route.

The next target turned into an interception when Schwartz was knocked down by a defender as he tried to run a slant route. No penalty was called, and Brissett’s pass went straight to Chicago’s Greg Stroman Jr.

Things kept getting worse, as a Brissett pass over the middle was tipped and Schwartz was drilled by a defender when he leaped to catch it. He didn’t hang on.

The final attempt was a drop on a shallow cross. That brought out the boos.

Schwartz, a third-round pick in 2021, dropped two passes in the preseason opener and another last week. He admitted after the Jaguars game Aug. 12 the drops had gotten into his head.

“I told him on the sideline, ‘Look, you would not be in this position if they did not think you could do it,’” Brissett said. “‘At least cherish the part that they are putting you back out there no matter what. It is only because they want to see you succeed, and they want you to see yourself succeed.’

Stefanski said dealing with drops is part of the job description for a wideout.

“You understand that there are going to be drops. That is how it works,” he said. “It is something that comes with being a receiver so you just have to work through it.”

Schwartz had only 10 catches for 135 yards and a touchdown in 14 games as a rookie, and the Browns were expecting a big leap in Year 2. He, Demetric Felton and rookie third-round pick David Bell are the candidates to pick up snaps after starters Cooper and Donovan Peoples-Jones, and the brutal preseason could cost Schwartz playing time and maybe even a spot on the gameday roster.

Brissett doesn’t want to dwell on the difficulties.

“As you saw, I kept going back to him because of the confidence I do have in him,” he said. “Look, it is part of the game. It is nothing to beat him up about. I was talking to him on the sidelines like, ‘It is just scar tissue. Just go back to work. Keep trusting yourself. When the page turns, you are on the other side of it.’ Just continue to feed him and continue to give him opportunities.”

Jacoby Brissett doesn’t get much help, manages only 3 points in 21-20 loss to Bears in preseason finale
Jimmy Garoppolo no longer an option for Browns after agreeing to stay with 49ers