Prime numbers: Myles Garrett confident he can stay at top of his game, pile up sacks for another decade 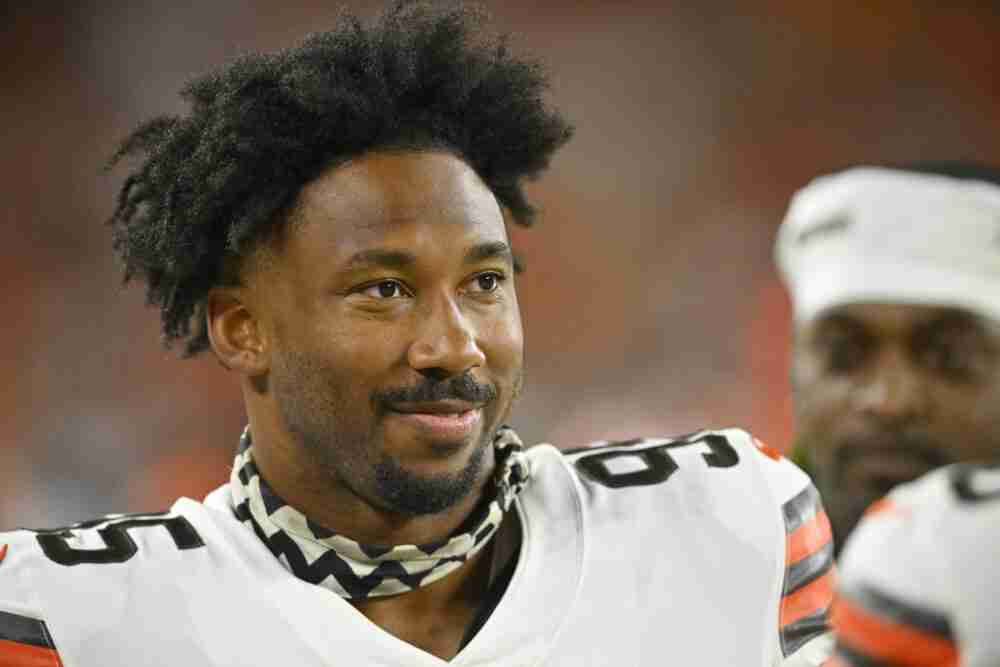 As scary as it must be for the rest of the NFL, Garrett may only be getting started.

“Last couple years, I’ve really been on top of my game,” he said last week in an interview with The Chronicle-Telegram. “I think I’ve only taken a step further as far as growing as a leader and as a player. So I do think I’ve been growing even though these are some of my best years. I hope to have many more left in the tank, but I do think I’m either in or steadily approaching my prime.”


The notion of Garrett not being at his best yet may seem silly given he’s been voted first-team All-Pro the last two seasons after combining for 28 sacks. But he doesn’t turn 27 until Dec. 29 and has yet to put together an entire season of dominance.

He was suspended for the final six games of 2019, missed two games in 2020 with COVID-19 and was far from 100 percent when he returned, and a groin injury in the last month last year slowed him as he had one sack in the final four games.

Browns Preview 2022: Jacoby Brissett’s ready to make the most of his opportunity as starter

Despite the setbacks, he’s fourth all time with 58.5 sacks in his first 68 games. Only Hall of Famers Reggie White and Derrick Thomas and three-time NFL Defensive Player of the Year J.J. Watt got off to more productive starts.

With the Browns preparing to start the season Sunday in Carolina and play the first 11 games without three-time Pro Bowl quarterback Deshaun Watson, Garrett has assumed extra responsibility. But as powerful as the sculpted 6-foot-4, 272-pounder is, he’s only one man and can feel helpless in a sport with 22 players on the field.

“Sometimes you get like that and then you have to bring yourself back to center, compose yourself and then turn on the tape,” Garrett said. “Sometimes you’ve got to reach out to someone and know there’s always something to be done.”

He never feels helpless for long.

“There’s always something to be done. Even with one player. It’s a lot different than in basketball, some other sports, because there’s so many players on the field, but there’s a lot that one player can do. Especially in my position and the quarterback position. That’s why we are offered the most (money).”

Garrett got a sack through a triple team last year but that’s a hard way to live and rack up stats. He’ll need the rest of the pass rush to draw attention and for the Browns to be leading so he can devote all his attention to getting after the quarterback.

Middle linebacker Anthony Walker Jr. sees the pressure Garrett puts on himself to lift everyone around him, and Walker feels the pressure to live up to Garrett’s lofty expectations.

Fast and Faster: Linebackers Jacob Phillips, Jeremiah Owusu-Koramoah look to take defense to another level with their speed

When Garrett arrived in 2017 as the No. 1 pick in the draft, he made it clear he intended to make the Hall of Fame but also that he had a variety of interests outside of football. It seemed fair to wonder if he would retire earlier than most greats.

But after five seasons, he’s talking about playing for another decade. He said his passion for the game hasn’t grown but has changed.

“And know it starts with this year. And I’m happy with the progress that we’ve made and I’ve made. And I think there’s a lot of good years left.”

Garrett is starting the first year of a five-year, $125 million contract extension signed in July 2020. The deal takes him through 2026. Would he rule out another extension or two?

He takes inspiration from the long careers of Buccaneers quarterback Tom Brady, who’s still playing at 45, and Hall of Fame defensive end and mentor Bruce Smith, who played until he was 40.

“I know the game’s changed, nutrition has changed and that means longevity has changed, as well,” Garrett said. “Tom Brady is probably the greatest example of it in our game. LeBron (James) probably being in the NBA. But being able to take care of your body and knowing what to put in it and having the right people around you to maintain it.

“If you can stay healthy, you can keep yourself in great physical condition all year round. I don’t think there’s a reason that I couldn’t play for another 12 years or more. But at the end of the day, you gotta still love it. Gotta still have that same passion for the game.”

He’s driven to correct even the smallest weaknesses to reach another level and continues to work on play recognition, manipulating offensive linemen with his hands, shedding blocks and playing the run. He believes if he’s better on first and second down he can create better pass rush opportunities on third down.

He has an NFL Defensive Player of the Year award in his sights and thinks 24 sacks are within reach. Pittsburgh’s T.J. Watt had 22.5 last year, tying Michael Strahan’s 20-year-old season record.

“I think I have the ability to match up with any opposing offensive tackle or pass the record that’s up there right now,” Garrett said.

He’ll take motivation from fellow end and former No. 1 overall pick Jadeveon Clowney. In their second year together, Garrett described their relationship as “explosive.”