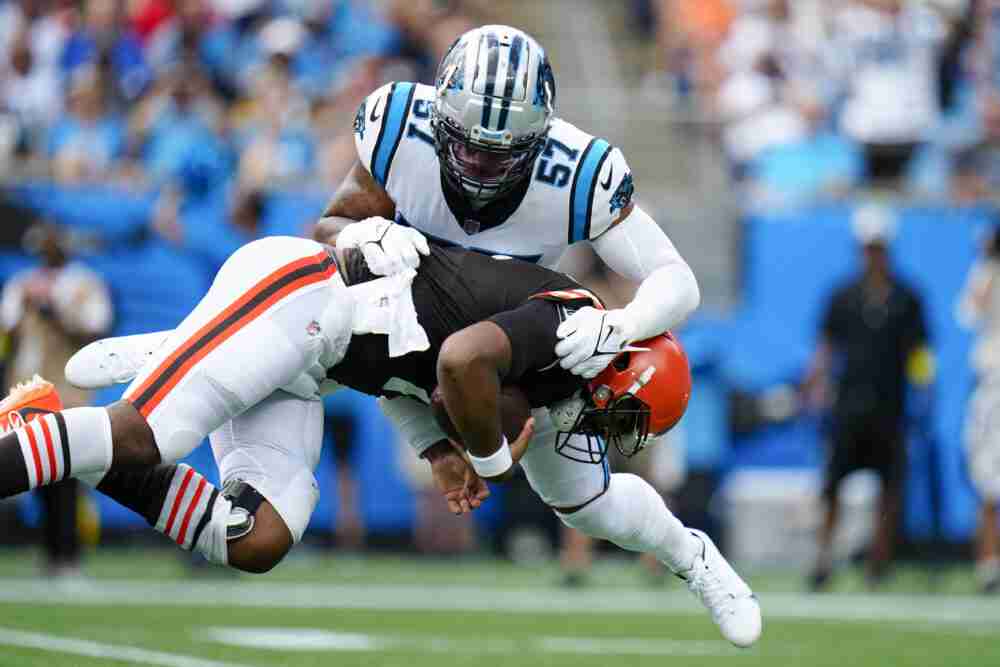 It came this close to being their worst nightmare. Instead, it was their first opening day win since 2004 — when Cade York was 3 years old.

Browns 26, Panthers 24. Other than that, it was a pretty mundane Sunday in Carolina for the Browns, who are now only 10 games away from the return of their $230 million quarterback.


When that happens, Cleveland will presumably be able to win a game without 154 yards-worth of field goals from their rookie rocket launcher, who in his NFL debut scored 14 of his team’s 26 points

“Game 1 and the kid just knocks it down the middle,” said a grateful Kevin Stefanski, who became the first Browns coach since Butch Davis to win the first game of the season.

The kick that Cade made saved the Browns, the Browns coaches and especially the Browns ownership from the ignominious embarrassment of being the first pelt on Baker Mayfield’s belt since leaving Cleveland.

Mayfield threw for one touchdown, ran for another and completed 16 of 27 passes for 235 yards, one interception and a quarterback rating of 84.

Jacoby Brissett completed 18 of 34 passes for 147 yards, one touchdown, no interceptions and a quarterback rating of Brandon Weeden.

Actually, Brissett’s numbers might be better than they look, considering he was replacing Mayfield AND Deshaun Watson.

In reality, however, Brissett looked like a career backup quarterback playing for a new team, learning a new offense, after seeing virtually no action during the practice games. Is that his fault or the team’s fault?

When you win, nobody cares, right?

Hey, the Browns are 1-0 for the first time since Cade York was 3 years old. Nobody’s complaining.

So consider this an observation, not a complaint. The Browns need a better version of Brissett going forward. His lack of chemistry with his receivers was apparent, and understandable, since he’s barely played with them under game conditions.

Nevertheless, with Nick Chubb and Kareem Hunt running wild, as expected, the Browns outrushed Carolina by 163 yards. In total yards, Cleveland outgained Carolina by almost 100 yards. The Browns also had no turnovers, ran 24 more plays than Carolina — but still would have lost had Cade York not kicked a field goal from the Exit 29 rest stop on Tobacco Road.

What the Browns lacked — Thunder Foot’s kicking aside — were big plays. Big plays from scrimmage. That’s usually the quarterback’s bailiwick. But because he was denied playing time during the preseason games in which to familiarize himself with his receivers in game conditions, Brissett produced few show-stopping throws.

Maybe that will come the more he plays. It better. Because the list of teams that have been Super Bowl contenders with quarterbacks who only throw short passes and hand the ball off to running backs, is a short, if not nonexistent one.

When games must be won late in games, it’s the quarterback who has to do the leading. It’s why they get the big bucks. It’s also why playing 11 games with a backup quarterback is such a challenge.

Brissett, who has a reputation for being a great teammate and a solid citizen, was fighting back tears when talking to the media following Sunday’s game. Only he knows what that was about. Maybe it was simply the thrill of victory. Maybe he was thankful that the team was able to win without him playing to the level he felt he should have played.

Or maybe we all need to be more patient — present typist included — with a quarterback who is being asked to run an offense under virtually unprecedented circumstances. This whole Browns season is awash with uncomfortable drama already, and the team has only played one game.

Brissett has served as a backup-turned-starter a couple of times in his career and has played to about the level that most backups play. Again, backups are backups for a reason.

But no backup quarterback has ever stepped into a starting job with the backdrop of this particular franchise, with its particular history, backed by its singularly rabid, loyal and under-rewarded fan base.

There is a lot riding on this Browns season, and as the starting quarterback for this Browns team, chasing this Browns’ dream, with all of its well-worn and heartbreaking history, well, that’s a lot to pile on the plate of a newly acquired quarterback.

This is all new to Cade York.