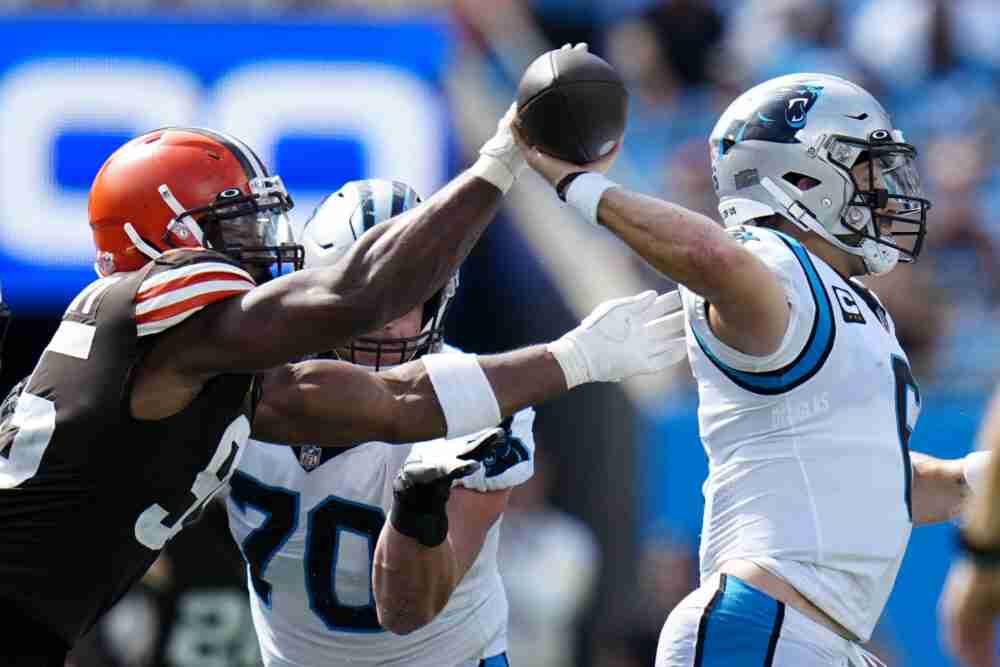 Garrett saved a parting shot for the postgame interview room.

“The tone was set with the attitude of some of the guys on the other side,” the All-Pro defensive end said Sunday after a thrilling 26-24 win in the season opener. “We were just ready to go out there and finally put things to bed.

Garrett was referencing T-shirts made for the opener by Mayfield’s marketing team. They were titled “Off the Leash,” indicating he was free after being traded by the Browns, including renderings of a broken dog collar and an orange dog.

Garrett and Mayfield were No. 1 overall picks by the Browns in 2017 and ’18 and were supposed to lead the franchise out of its misery. They combined to end a 17-year playoff drought in 2020, but the relationship was strained and Garrett told Cleveland.com recently he didn’t reply to a text from Mayfield after he was traded to the Panthers on July 6.

Besides the two sacks that gave Garrett 60.5 for his career, 1.5 behind Clay Matthews for the franchise lead, the Garrett-Mayfield reunion was cordial. Garrett went up to him after the game, which the Browns won on a 58-yard Cade York field goal with eight seconds left.

“Two competitors. Player to player, man to man,” Garrett said. “I go to most of the guys I was competing against on the field. It’s a privilege to be able to step on this field and play against these guys. We’re some of the world’s best athletes and America’s best. I’m just happy to be out here and tell the guys to be grateful for it.”

The Browns defense made life miserable for Mayfield early before he rallied in the fourth quarter with a 7-yard scramble for a touchdown and a 75-yard touchdown pass to receiver Robbie Anderson. Mayfield’s final drive ended with a 34-yard field goal and a 24-23 lead with 1:13 left. His defense couldn’t hold it.

He finished 16-for-27 (59.3 percent) for 235 yards, a touchdown, an interception, four sacks, four fumbles and an 84.6 passer rating. The Browns tipped five passes, and Mayfield struggled holding onto snaps but didn’t lose any of the fumbles.

The interception thrown to safety Grant Delpit set up the Browns’ first touchdown in the second quarter.

“Slight miscommunication, but I’ve just got to take care of the ball,” Mayfield said. “What’s happening and just me reacting, being able to throw it, I’ve just got to be able to play better.

“So that’s on me. I dropped my arm, and the ball sailed on me. I’ve got to take care of it, especially in our own territory.”

The Browns and their fans had seen plenty of this type of performance from Mayfield. He was up-and-down and fought to the end.

After going 0-for-5 last year with a chance to lead a go-ahead drive in the final minutes, he succeeded Sunday.

“Baker’s one of those guys who’s going to give it his all until the clock hit zero-zero,” running back Kareem Hunt said. “He came out ready to fire in the second half.”

“It’s Bake, he’s not gonna give up on his team,” running back Nick Chubb said.

Mayfield talked to both backs after the game. He didn’t interact with coach Kevin Stefanski. They didn’t see eye to eye on play calling and other things during their two years together.

Garrett was asked if Mayfield earned more respect Sunday than in their four years together.

“No. He didn’t lose my respect,” Garrett said. “I don’t think I ever had a problem with him as a football player. He was playing injured and that earns a lot of respect in my eyes, as well.”

Mayfield was grateful for the pre- and postgame hugs with former coaches and teammates, including offensive coordinator Alex Van Pelt and receiver Donovan Peoples-Jones.

“Those are the people that I know are in my corner for life, that have seen the work that we all put in together for years,” Mayfield said. “So it’s always great to see those guys. Those are the only people that know the ins and outs and everything that goes on within that building, and those are the relationships that really matter.”

Garrett became the fifth player since 1982 with 60 sacks in his first 70 games, joining Reggie White, Derrick Thomas, T.J. Watt and J.J. Watt. His 15 multi-sack games are the most in franchise history.

“Imma just play my game,” Garrett said. “Go out here, just treating it just like a practice. It’s the same environment, just because we had fans and some cameras doesn’t mean I should have to play any different than I do in practice.

“Try to give my all out there and hopefully it translates every time I step on the field for a game. But as far as those plays being made, just playing within myself and knowing my opportunities are going to come with one-on-ones, inside moves or whatever it is. I’m going to get my opportunities, I just have to make them count.”

Mayfield seemed glad the matchup was over.

“Everybody made this out to be the Super Bowl, but despite what everybody’s going to make this, there’s 16 more games,” he said. “The Super Bowl’s not till February and this is the beginning of September.”

Garrett said he never made too much of it.

“I know there was a lot of buildup from the outside. But I was just not allowing myself to see or pay attention to any of that, it really allowed me to lead these guys to play free and not worry about the outside noise and distractions,” he said. “At the end of the day, 6 is another guy we have to get after and regardless of how he reacts before, during and after the game, once it’s over, it’s over. We’re on to the next one and it was just another game.”