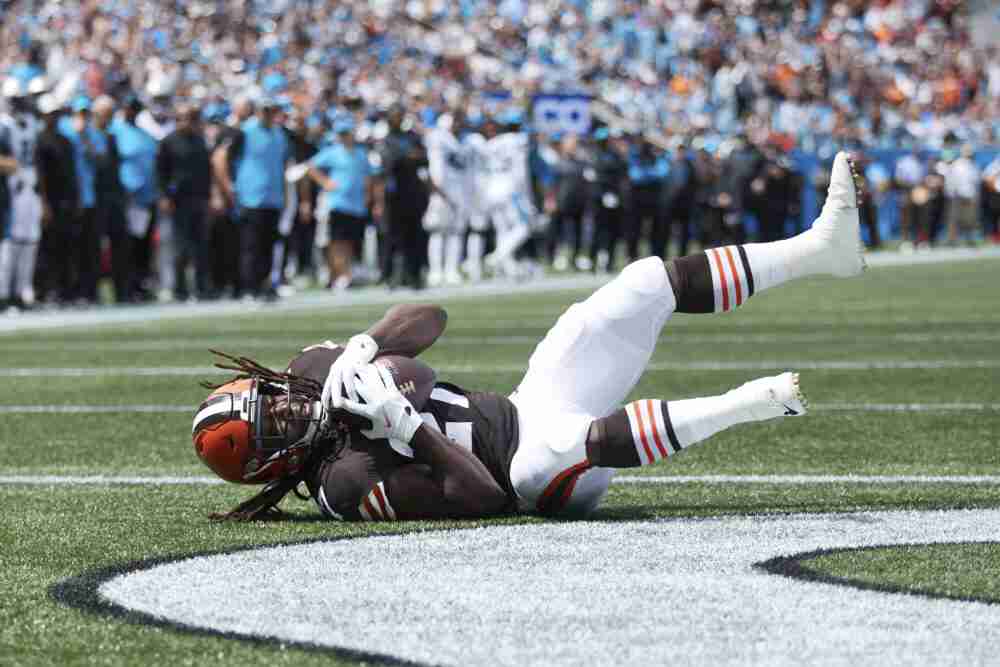 CHARLOTTE, N.C. — Coach Kevin Stefanski needed only two plays to give the fans what they’ve been clamoring for for two years.

On the second offensive snap in the season opener Sunday, running backs Nick Chubb and Kareem Hunt were on the field together. By an unofficial count, they shared the huddle for another seven snaps, with all eight in the first half.

The change worked, as they totaled 213 yards and two touchdowns as the Browns beat the Panthers 26-24 at Bank of America Stadium.

Chubb and Hunt are in their fourth season together and are a strength of the team.

“That’s nothing new,” Chubb said of the production. “I love Kareem so much. That’s one of my best friends on the team and he’s amazing, he can do it all. He had a running and receiving touchdown, just shows who he is and how his ability is on the field. He can do everything.”

“I know he wants to go 1-0 and he achieved that today,” defensive end Myles Garrett said. “So regardless of how he felt during the summer, I know he’s put his head down and he’s worked. He’s been a great teammate, he’s fun to be around and he’s a special player and we’re glad to have him.”

Hunt lined up at running back and receiver and when he was on the field with Chubb was often in motion.

“Whatever they call, I’m going to figure out a way to make it work,” he said. “The second touchdown? I saw the offensive line do a great job double-teaming in there. I kind of just faked like I was going to go outside and I went right back up the middle and it was wide open. All I had to do was just run and use my speed.”

“He was excellent,” Panthers coach Matt Rhule said. “The biggest thing he did was that he broke tackles and got to the edge. We know the type of back that he is.”

“That’s to be expected. I don’t think I’ve ever seen them lay down or shy away from a hit,” he said. “They have different running styles, but the one thing that can be said about both of them is they’re relentless and trying to gain more yards, trying to get more — not allowing one guy to take them down. I’m honestly shocked Nick didn’t have more.”

The pass game had a difficult day overall — 147 yards — but receivers Donovan Peoples-Jones and Anthony Schwartz made noticeable contributions.

Peoples-Jones led the team and tied a career high with six catches for 60 yards, including a few that were tightly contested. Schwartz, who dropped five passes in the preseason, caught a 19-yard pass that converted a third down on the fourth-quarter field goal drive that made it 23-14. He rushed twice for 20 yards, including a 15-yarder.

“Battle, that’s what they do,” Stefanski said. “I thought 11 (Peoples-Jones) early made some contested catches that were huge for us in that game and then we trust Anthony, we have a lot of faith in him.”

Right guard Wyatt Teller dropped to his knees and looked toward the sky after Cade York made the winning 58-yard field goal.

“Obviously I was excited for Cade, but I was just thanking God, one, that we won, two, that I was healthy,” Teller said. “It was a blessing.”

Teller had a scare in the second quarter when he got up limping after safety Xavier Woods went low on him as he tried to defend a screen pass. Woods was penalized 15 yards.

“He didn’t mean to do anything dirty,” Teller said. “He was just trying to make the tackle. He just went low and got through. That happens.

“I’ve done really boneheaded things that people are like, ‘oh, he’s a dirty player.’ And then I’m like, ‘I didn’t mean to do that.’ This game’s a tough game and obviously I’m blessed I didn’t get hit hard. But I’m just happy I made a play. I made a block down the field. I didn’t look too slow.”

“For all of our guys I tried to be real smart in this Week 1, especially guys that haven’t played a ton and have come off whatever type of injuries that maybe we’ve had,” Stefanski said. “So there were a bunch of guys I just wanted to make sure we were rotating early. Really at a lot of positions.”

Ward missed the start of training camp with a foot injury, and Newsome missed the preseason with a hamstring injury.

The Browns also rotated the linebackers, with Anthony Walker Jr. and Jeremiah Owusu-Koramoah starting and Jacob Phillips and Sione Takitaki coming off the bench.

Safety Ronnie Harrison Jr. started in the three-safety package and played a bunch of snaps.

The Browns were down to their No. 3 right tackle, as James Hudson III started. He was a fourth-round pick in 2021.

Starting right tackle Jack Conklin and No. 1 backup Chris Hubbard were inactive. They were listed as questionable on the injury report, are close to being ready and worked out for a half-hour before the game under the direction of line coach Bill Callahan.

Hudson started four games and appeared in 12 as a rookie and struggled. He held quality Panthers defensive end Brian Burns without a sack Sunday.

** A surprise inactive was running back D’Ernest Johnson as a healthy scratch. Rookie Jerome Ford, a fifth-round pick, was active and the kickoff returner, returning one for 29 yards.

Harrison was the game captain.

** Linebacker Jordan Kunaszyk and defensive end Isaac Rochell were elevated from the practice squad to the active roster Saturday.

Receiver Michael Woods II (illness/hamstring) was downgraded to out.