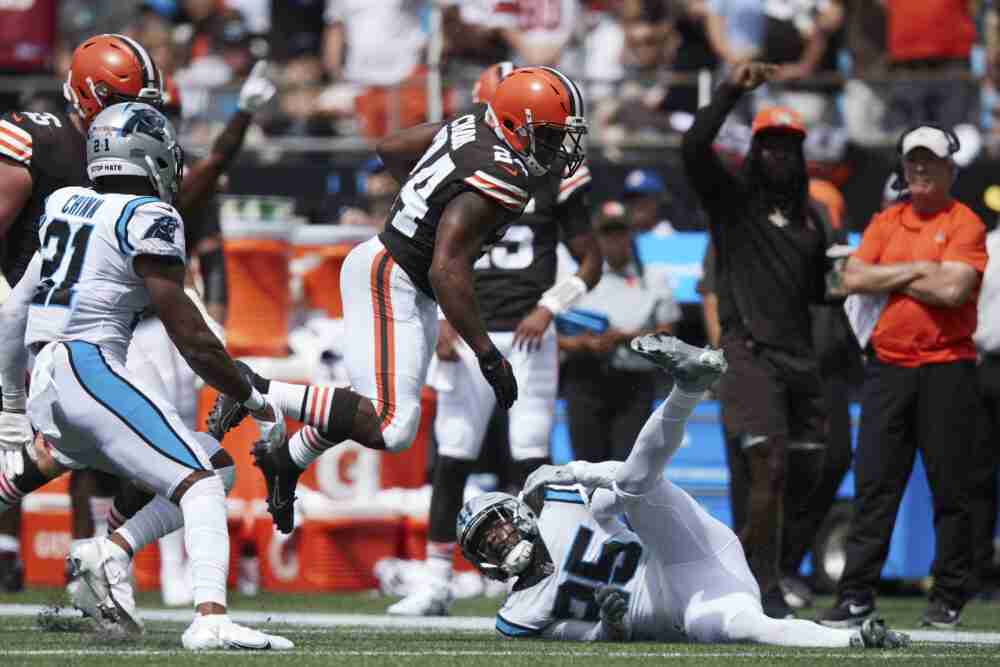 He continues to be amazed.

“He had two runs late in the game — I am not going to tell you the name of the play — consecutive that are as good as there are in the NFL,” Stefanski said Monday on a Zoom call. “Making guys miss, jumping over people and playing physical, it was a sight to behold.”


That’s a huge compliment from the understated Stefanski and came after Chubb rushed 22 times for 141 yards and a 6.4 average Sunday in a 26-24 season-opening win over the Panthers.

“I think I saw a play where he jump cut 15 times in one play, it was pretty cool,” right guard Wyatt Teller said. “It’s amazing. It seemed like time stood still there for one second. He was just jumping around and jumped over the play.”

Since Chubb was the No. 35 pick in 2018, he leads the league with 48 rushes of 20 yards, including two Sunday. Ravens quarterback Lamar Jackson is second with 34.

Chubb isn’t much for talking or self-promotion, so it was a surprise when a hype video was released on his Instagram account over the weekend. He explained his reasoning after the game.

“Just being in Cleveland for the last four years and things not going our way,” he said. “And I feel like it’s time to turn a new leaf as Kareem (Hunt) has been saying, and that’s what it is.”

Stefanski used Chubb and Hunt together for eight snaps against the Panthers, and they totaled 213 yards and two touchdowns. It was a change to past game plans under Stefanski.

“It is something that we are always going to explore week in and week out what we feel like gives the defense a tough time,” Stefanski said. “Moving forward, definitely could see something like that growing.”

“That is a rare performance for a rookie, as we all know,” Stefanski said. “Pretty unprecedented for him to go do that. Just going to continue to grow with him. Recognize that he is a rookie. He is going to miss a kick, but we trust in the kid.”

The winner was the longest kick by a rookie in Week 1 in NFL history, but Teller said the veterans aren’t going to buy York dinner.

The Panthers weren’t pleased with a call and a non-call on Cleveland’s winning drive.

Defensive end Brian Burns was penalized for roughing the passer to start the drive when he appeared to make helmet-to-helmet contact with quarterback Jacoby Brissett. Panthers running back Christian McCaffrey called it a “horrid call” after the game, and coach Matt Rhule said he asked for an explanation from the officials but didn’t get one.

“(It) was called because there was forcible contact to the head and neck area,” referee Brad Rogers told a pool reporter.

The non-call might have been even more significant. After a 9-yard completion to Amari Cooper to the Carolina 40-yard line, Brissett went to spike the ball to stop the clock but didn’t release it. He fired the ball into the ground on the second try, eliciting a flag. Rogers then announced there was no penalty.

“After discussion, we determined that stepping back does not disqualify the quarterback from spiking the ball and we allowed him to do that by rule,” Rogers said.

An intentional grounding penalty would’ve cost the Browns 10 yards and 10 seconds, leaving York to hurry for a 68-yarder.

“We just literally showed our guys two days ago a quarterback pump or mishandling a snap can’t take more than a step back. Then it becomes intentional grounding,” Rhule said. “It looked to me that was what the quarterback was doing when he stepped back and then put the ball on the ground. They obviously called it and then changed it.”

Brissett said “I don’t know” when asked if he did something wrong.

“The spike, whatever they ruled, I will go with the officials on that one,” Stefanski said.

Receiver Donovan Peoples-Jones led the team with six catches for 60 yards. Many came with a defender close in coverage, which impressed Stefanski.

“Really from the beginning to the end,” he said. “He made the plays that came to him. That is a very valuable asset to have as a receiver where, even when you are covered, you are not. For him to go up and get the ball was impressive in a bunch of those moments.”

Right tackle Jack Conklin was inactive, but Stefanski said he didn’t have a setback and is “really close” to playing. Conklin’s coming back from a torn patellar tendon suffered Nov. 28.

** Peoples-Jones and Cooper played 66 of 80 offensive snaps to lead the receivers. Anthony Schwartz (23), rookie David Bell (22) and Demetric Felton (11) filled out the rotation.

** Jeremiah Owusu-Koramoah led the linebackers by playing 45 of 53 defensive snaps. Anthony Walker Jr. was next with 36, followed by 20 for Jacob Phillips and 10 for Sione Takitaki.