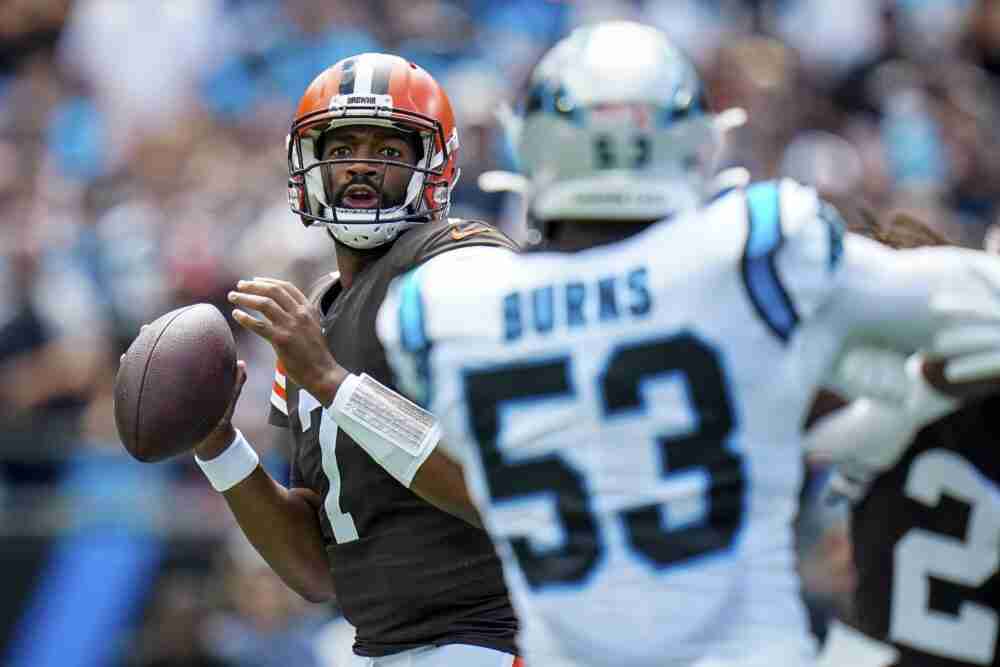 When the game was over, Brissett’s humanity was on display for everyone to see.

I’ll get to the missed throws but wanted to start with Brissett’s postgame interview in a concrete room under Bank of America Stadium.


He was asked a routine question about the Week 1 jitters and didn’t make it through the answer without choking up.

“Definitely, I think emotions were hot. You know just, you — this moment — I’m sorry,” Brissett said before pausing, speaking less than a half-hour after leading the winning field goal drive in the final 73 seconds. “Like the buildup for this moment, it goes further for me from being here. A long time coming to get to this point and I’ve got to do a better job of calming those emotions down, especially in a lot of these critical situations.”

When I sat down with Brissett before the season, he made a point to say he chose Cleveland not in spite of, but because of, a situation many would describe as messy. Brissett acknowledges he’s a placeholder for Deshaun Watson, who’s serving an 11-game suspension, but wanted any chance to start again in the NFL after two years as a backup and knew Watson’s off-the-field issues made that a likelihood.

When the time arrived to take the field with his new team as the opening-day starter, Brissett felt the magnitude of the moment and said he was more emotional than in past starts. Add the adrenaline from a winning drive, and he was overcome throughout the interview.

“So many thoughts and emotions are going through my head now,” he said. “These aren’t promised. So whenever you get an opportunity, you cherish those opportunities.

“It’s definitely special being in that huddle and being the guy.”

The gratitude for his role and desire to express it must be among the many reasons teammates love playing for him. In a professional sports world dominated by greed, Brissett’s attitude should also be refreshing to fans.

They’d have to be willing to look beyond the performance vs. the Panthers.

Brissett missed three chances for big plays on the first two drives. He was wide with three throws to receiver Donovan Peoples-Jones on short outs. He looked slow on play-action fakes and scrambles.

The uneven outing has some worried about the 10 games left before Watson’s scheduled to return, and others wondering about turning to unproven backup Joshua Dobbs. Both thoughts are premature.

Brissett, 29, is clearly flawed but can have success. Many of his mistakes are correctable.

On Cleveland’s first drive, receiver Amari Cooper made cornerback Jaycee Horn look silly and was wide open down the right sideline. Instead of firing the pass when Cooper broke free, Brissett lofted it deep, which allowed the safety to get over to make a play on the ball, which was a bit overthrown.

Brissett appeared to overcompensate on the next drive when running back Kareem Hunt was split wide left, got past linebacker Shaq Thompson and was wide open for what could’ve been a touchdown. Brissett didn’t put enough air under the ball and overthrew Hunt by a half-step.

Coach Kevin Stefanski had done a good job putting his playmakers in positions to succeed and did so again with play-action that allowed Peoples-Jones to run free deep down the middle on a double move. Brissett appeared to see him but chose not to take the shot, tucked the ball and scrambled for a couple of yards.

Brissett doesn’t take a lot of chances and will have to learn when Stefanski wants him to let it rip. The key to loosening up the defense is to make it pay for devoting too much attention to the run game.

As for the two misses, Brissett should be better with less emotion and more time spent with the receivers.

“He will continue to get better.”

Fans should brace themselves for many games that aren’t masterpieces. Brissett’s a backup for a reason, even if he believes he’s destined for more and is motivated to prove that.

But the Browns can win with him and stay in playoff contention throughout the season, especially until Watson returns.

The missed opportunities early would’ve made all the difference and turned the nail-biter into a comfortable win. If Brissett gets five such plays a game and hits two, and you combine that with an elite running game, dominant defense and rookie kicker Cade York, I like the Browns’ chances.

What shouldn’t be forgotten is Brissett didn’t throw an interception, made two clutch throws on the winning drive — a deep in to Peoples-Jones on which Brissett was hit just after he threw and a curl to Cooper — and picked up the win to improve to 15-23 in his career.

“That is big-time football right there,” Stefanski said. “Jacoby, he battled his butt off and that’s what he does.

“He can be better, but really, really proud of how he finished that game.”

The Browns made a change Tuesday at the bottom of the cornerback depth chart.

Thomas Graham Jr. was signed to the active roster off the Bears’ practice squad and Herb Miller was waived. Graham will serve as the fifth corner behind Denzel Ward, Greg Newsome II, Martin Emerson Jr. and A.J. Green. Greedy Williams was placed on injured reserve Friday and must miss at least three more games.

Graham (5-foot-11, 197 pounds) was a sixth-round pick of the Bears in 2021 out of Oregon. He spent most of last year on their practice squad and has started one of four games.

Miller was re-signed to the practice squad. He recovered a muffed punt Sunday in the opener.

Commentary: Jacoby Brissett looked like a backup because that’s just what he is
Browns-Jets Preview: 3 things to watch, 3 key numbers, the prediction