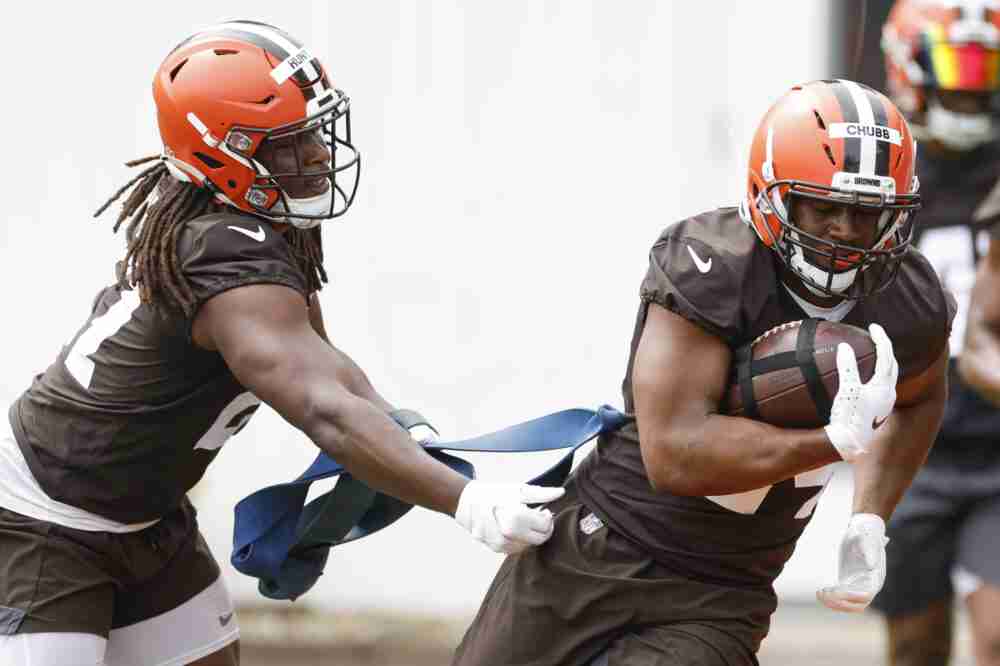 “They say we’re better together,” Hunt said Wednesday of the reason for the joint interview.

Coach Kevin Stefanski is in the process of discovering just how true that is during games.


He strictly alternated Chubb and Hunt at running back in 2020, then his plans for them to share the field didn’t materialize last year due to injuries. He didn’t wait to try the combination this season, using them together for eight snaps Sunday in the 26-24 opening win over the Panthers.

The Browns had 80 offensive plays, so the Chubb-Hunt package wasn’t the focus. It’s an intriguing wrinkle featuring two of the team’s top playmakers and could grow into a larger piece of the offense.

Stefanski wasn’t ready to commit to it as a staple and said the decision on how much to pair them will be made on a game-to-game basis.

When Hunt returned from an eight-game suspension to start 2019, then-coach Freddie Kitchens often used him and Chubb together, with Hunt mostly a lead blocker and receiver. He rushed only 43 times in eight games and caught 37 passes as Chubb finished second in the league with 1,494 yards rushing.

Hunt can still block on occasion, but pairing him with Chubb allows either to be used as a runner or receiver, giving the defense one more thing to worry about than when they alternate in the backfield.

“That’s just a different opportunity to get the ball in space,” Hunt said. “You’ve got to have your playmakers touch the ball even when it is a pass because I know if you check it down and throw it to Nick he can turn it into 20 yards and I feel like I can do the same on the roll and checkdown.”

Hunt believes the best is yet to come from the combination.

“Most definitely. I feel like the best is yet to come for the whole team,” he said. “We got some guys that are hungry to win. That’s the biggest thing. We gotta listen to everybody talk about how bad the Browns are going to be this year. We just let it go in one ear and out the other.”

Chubb is on the same page as his close friend. Chubb released a hype video ahead of the opener with him preparing for the season mingled with elements of a Batman graphic novel.

“The city is tired of being embarrassed, tired of all the pain, and most importantly, the city is tired of losing. And so am I,” he said in the video. “Five years in with nothing to show for it really has me questioning everything. Have I done enough?

A friend from home in Georgia brought the idea to Chubb and the video was in the works for months.

“Just overall, I think Cleveland the city itself is tired of all the losing. Kinda me the same way,” he said Wednesday. “Coming here, drafted here, I wanted to kind of change and it didn’t come. So I think that’s overall just how I felt in the video.”

It’s not new, but Chubb looked like a superhero on some of his runs against the Panthers. One was particularly impressive, as he jumped over a pile of bodies and kept cutting to daylight as he ran down the field.

“I remember watching one in the game, and I got a minus (grade on the play) because I was supposed to carry out my fake and I just watched,” quarterback Jacoby Brissett said. “And it was worth it — that is for sure.”

The day-after film sessions are often the first chance for Chubb and Hunt to see exactly what they did.

“I don’t know what’s happening. I just kind of do whatever I feel as an instinct,” Chubb said. “I don’t remember doing it.”

“It’s nice to be able to watch film and see some of the stuff we do, I see some crazy stuff Nick does on tape that I really can’t see on the sidelines,” Hunt said.

The Browns’ 217 yards rushing in Week 1 ranked second in the league, and they get a test from the Jets on Sunday in the home opener. New York held run-heavy Baltimore to 63 yards and 3.0 a carry.

“They’ve got a good front seven, good linebackers, some big guys up front,” Hunt said. “We’re just going to have to play hard, play through the whistle as a team and do our thing, which is run the football.”

The Browns will be braced for a tough matchup in the trenches but believe they can have success.

“That is the nature of when we show up and the run game,” Stefanski said. “Teams are going to try and defend the run. We get that.”

It might not be pretty, but Chubb and Hunt are used to powering forward despite early contact.

“That’s part of our offense,” Chubb said. “Everybody knows we’re a run-first team. It’s not a secret and that’s what we pride ourselves on.

“The O-line does a great job up front. After that, it’s up to me and Kareem to break tackles and get the extra dirty yards. I think it’s something we both do well.”

Whether taking turns wearing down the defense or being on the field at the same time, Chubb and Hunt inspire each other to greatness.

“Kareem brings a lot of energy to the team, a lot of intensity and I feed off of that,” Chubb said. “When Kareem’s in there, he’s running the ball hard and it gets me going, so I enjoy playing with him.”

“I most definitely feel the same,” Hunt said. “Seeing Chubb start off the game real strong and stuff, I can’t wait to get out there and give him a break and bring the same intensity and physicality.”

Now about the nickname given to the duo by some fans?

“We were just talking about that. What is it? Chunt?” Hunt said. “I mean, that’s all right, whatever they want to call us. But that’s Nick, I’m Kareem, as you already know.”