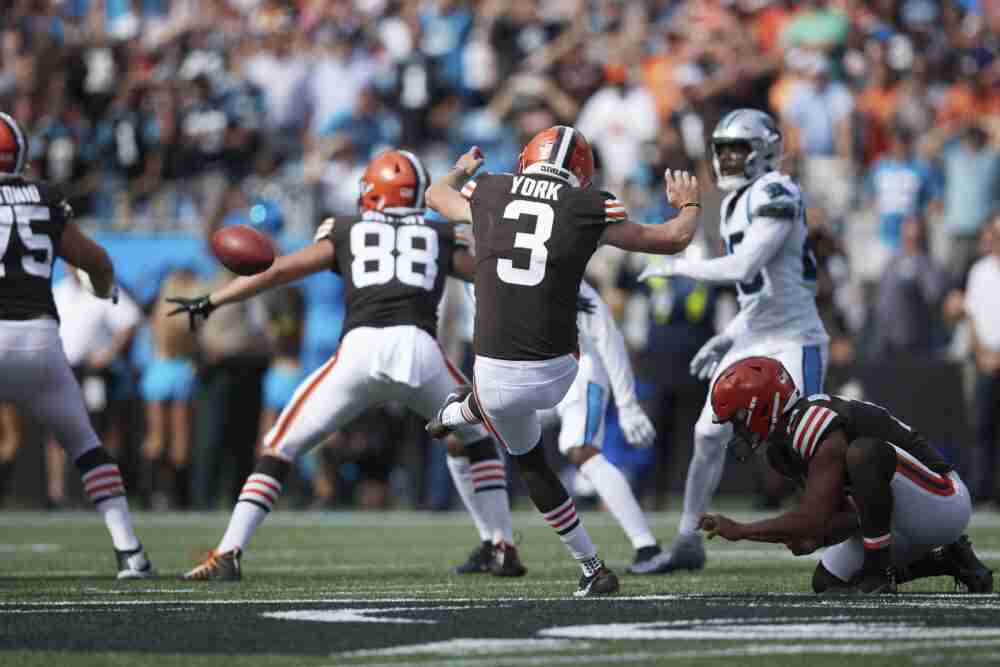 He wasn’t about to get too excited about being named AFC Special Teams Player of the Week on Wednesday.

“I mean, awards-wise, the week is over,” he said. “So it doesn’t really matter anymore. We’ve got 20 weeks left, hopefully, so just getting back to it.”


The league honor for York was a no-doubter, just like his kick with eight seconds left that beat the Panthers 26-24 on Sunday in Carolina. He was perfect on four field goals and two extra points.

The 58-yarder was the longest for a rookie in Week 1 in NFL history, second-longest in Browns history and gave the Browns their first season-opening win since 2004 and first on the road since 1994. His 14 points tied for the NFL lead in Week 1.

York is the first Browns kicker to win the award since Phil Dawson in Week 15 in 2005. Punter Jamie Gillan was the last Browns specialist honored, in Week 2 in 2019.

York, a fourth-round pick out of LSU, has worked on not getting too high or low or dwelling on any moment.

“It’s something that developed,” he said. “I had a good game, but next week’s a new game. Cleveland could hate me after next game, so it doesn’t really mean anything. So you gotta stay pretty even-keeled, because if you’re a roller coaster, there’s ups, but there’s also downs.”

York had told veteran quarterback Jacoby Brissett during the offseason reaching the 40-yard line would be good enough. That’s exactly what Brissett did in the winning drive in his first game with the Browns.

The confidence stands out to Brissett.

“One, from a rookie, that’s rare, but from a kicker, that’s even more rare,” he said. “But he puts in the work, so he should be confident. He should want the ball in his foot at the end of the game. He was confident, and that’s more than half the battle right there.”

York left college after three years and is only 21 years old. He’s mature beyond his years.

“We’ve had a lot of really good people come in as kickers over the years, but I would say it’s a unique combination of his confidence, his ability and overall I would just say his maturity,” said long snapper Charley Hughlett, who arrived late in 2014. “He does a really good job in all three of those areas.”

York had a poor session during warmups, and his kicks were moving from right to left. He played the draw on the winner, and it started out right of the right upright before curving through with room and distance to spare.

“I’d rather hit it dead straight, but I’ve been hitting it right to left all day so I just played that,” he said.

York is reliant on the snap from Hughlett and hold by punter Corey Bojorquez.

“I’ve got lots of trust in Charley and Corey and able to basically just go out there and worry about myself because I know they’re going to do their job just like I’m supposed to do mine,” York said. “We’ve got a great relationship in the group, and it’s been pretty great.”

Running back Kareem Hunt motioned out of the backfield and got the matchup he wanted but doesn’t understand. Flanked out wide as a receiver, he beat linebacker Shaq Thompson down the left sideline, but Brissett overthrew him.

“I kind of take it personal when a linebacker comes out to guard me, so I’m going to run by him,” Hunt said. “We’re gonna rep it more.”

Hunt was disappointed by the missed chance for a touchdown, and Brissett said the timing will be fixed. He also missed wide-open receiver Amari Cooper on the previous drive.

“A lot of room for improvement,” Brissett said. “It is just getting more repetitions at it. That was probably our first time in game live action. Can’t miss those obviously, but something that we are going to work on.”

Brissett tried to play dumb when asked if he “got away with something” on the spike to kill the clock before the winning field goal.

“What happened?” he said, before adding, “Going off what the ref said.”

The Browns faced third-and-1 at the Carolina 40-yard line when Brissett spiked the ball and stopped the clock at 13 seconds. The controversy arose because he didn’t let go of the ball on his first motion toward the ground, regrouped and then fired it into the ground.

An official threw a flag, but after a discussion, no penalty for intentional grounding was called. Panthers coach Matt Rhule disagreed.

“I think Jacoby knew what he was trying to do, and again, the officials ruled what they ruled,” coach Kevin Stefanski said.

A penalty would’ve brought a 10-yard loss, a loss of down, a 10-second runoff and the clock to start on the referee’s signal. The field goal would’ve been from 68 yards with a hurried snap.

“From what Prief said, yes, we would’ve gone out and attempted it,” York said of special teams coordinator Mike Priefer.

Did York have the distance for an extra 10 yards?

“I don’t really know,” he said. “There wasn’t a TrackMan (measuring device) or anything out there, but maybe.”

The offense was dogged by confusion Sunday, with players lining up in the wrong spots, rushed snaps, a delay of game and a wasted timeout. Stefanski said the issues didn’t cause him to reconsider playing his starters, including Brissett, more in the preseason.

“We take everything into account and take all the things we have done in practice, in meetings, etc.” he said. “There is not one right way to do it.”

Brissett thought the win justified any rust for him and the offense.

“We won so I do not think that we should rewrite it,” he said of the preseason plan.

Wilson is recovering from knee surgery, and veteran Joe Flacco will start vs. the Browns.

Running back Nick Chubb had a Baker Mayfield Panthers jersey hanging in his locker. They swapped after the game.

“He’s a close friend of mine, ex-teammate, so it’s only right that we got each other’s jersey,” Chubb said.

** The Browns had a shorter practice to prepare for the stretch of two games in five days. After the Jets on Sunday, the Browns host the Steelers on Thursday night, Sept. 22.

** Rookie running back Jerome Ford was active vs. the Panthers while running back D’Ernest Johnson was a healthy scratch. Stefanski said they preferred Ford as the kickoff returner. He returned one for 29 yards.

“We really, really like D’Ernest,” Stefanski said. “There will be times where D’Ernest is going to play, play a lot and help us win, but it just was not last week.”