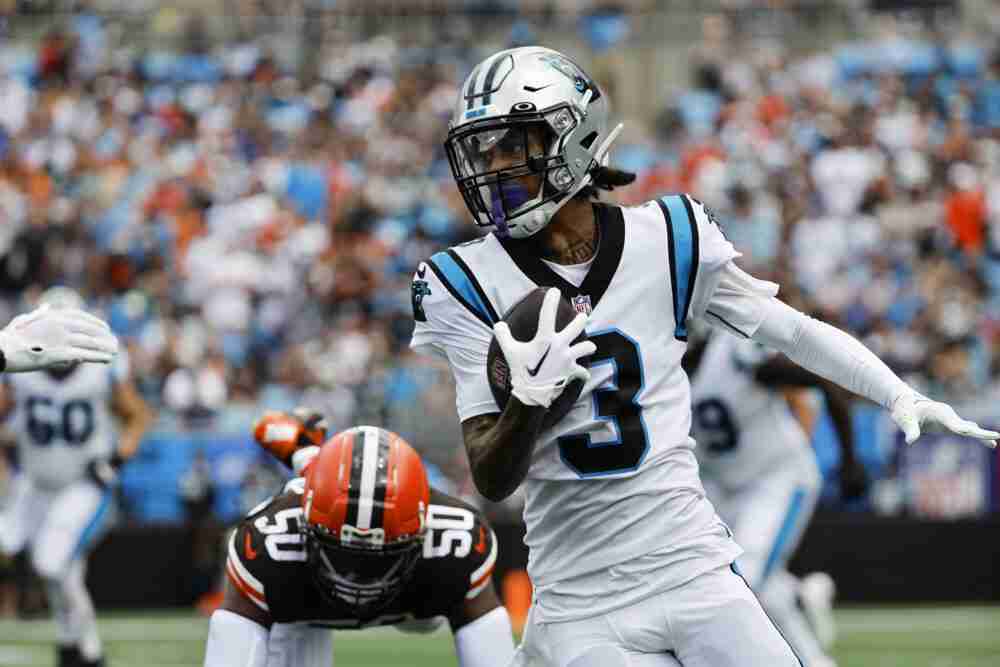 BEREA — Defensive coordinator Joe Woods had a message of gratitude for kicker Cade York after he drilled a 58-yard field goal Sunday to beat the Panthers.

“I hugged him after the game and I was like, ‘I love you,’” Woods said with a laugh Thursday. “It happens like that sometimes.”

He and his unit would’ve been on the hook for a miserable loss without York’s heroics. Despite playing great for the majority of the game, the defense had two breakdowns that led to touchdowns then allowed the go-ahead field goal drive in the final minutes.


“It’s not good enough,” linebacker and captain Anthony Walker Jr. said. “We talk about being an elite defense and part of that is not giving the offense anything, making them earn everything, and we thought we gave them a couple plays that they didn’t earn, that we kind of gifted them and it’s not OK. So we’ve got a long way to go.”

Of the 53 snaps played by the defense, all but a handful were outstanding. The Browns sacked Baker Mayfield four times, batted or tipped five passes, intercepted one and held star running back Christian McCaffrey to 57 total yards, including 28 on a run in which he picked up a dropped snap. The Panthers had 6 yards in the first quarter.

The two big breakdowns largely overshadowed the effort and nearly erased the first Week 1 win since 2004. The Browns are confident the issues will be easily fixed, but first they must be examined so they don’t return Sunday in the home opener against the Jets, who have Super Bowl winner Joe Flacco at quarterback and a number of talented receivers.

The Browns led 14-0 with 4:46 left in the first half when Mayfield and the Panthers got the ball at their 25-yard line. Mayfield converted a third-and-3 with a 16-yard pass to D.J. Moore, then caught the Browns in a state of confusion. Tight end Ian Thomas released out of the left slot and ran down the seam uncovered for a 50-yard completion to the 2 that set up a touchdown.

Cornerback Denzel Ward ran on the field right before the snap on the other side.

“That was my fault,” Woods said. “They changed the personnel group but kind of got on the ball. Instead of just staying with the group that I had in there, I tried to change to a different personnel package and I did not really cleanly communicate that or I do not feel like I got the call across. So I told the guys, ‘That is my fault. That play is on me.’”

The second blown coverage was blamed on miscommunication among the secondary.

The Browns had just extended their lead to 23-14 on a 36-yard York field goal with 6:17 left, but on the next play from scrimmage Panthers receiver Robbie Anderson ran past cornerback Greg Newsome II and safety Grant Delpit, and Mayfield found him for a 75-yard touchdown.

“That was just simple communication,” Newsome said. “If you’ve seen a route like that, that’s something we work on every day in practice. Just seeing what time it was in the game, what they needed, I was going to stay on top of the route and that would be canceled.

“We’ll definitely get that corrected. That’s an easy fix.”

The Browns were in a Cover-4 scheme, which receiver Amari Cooper told The Chronicle-Telegram in training camp is susceptible to the post, which is what Anderson ran.

“It is something that we work on all of the time. Just on that particular play, I don’t know why there was miscommunication,” Woods said. “The situation in the game, they were behind so they probably had to throw the ball. That is why I made the call I made. We just have to play better, and we have to communicate better, but we can’t let those plays happen like that ever.”

Without those two plays, the Panthers would’ve totaled 136 yards.

“You literally can be doing great the whole entire game, as we were I felt like, and one play can change the game,” Newsome said. “Luckily we have a great kicker that can bail us out.”

Blown coverages were an issue early last season and persisted until things improved dramatically over a strong second half. With most of the defensive starters and secondary back, they should be able to correct the problems immediately.

“The guys understand in the room what it was and the communication that it was,” Walker said. “Quick, easy fix, we fixed it on the sideline right away, so we didn’t have to linger on it two weeks, three weeks in. It’s one easy fix that everybody knows, so I think that’s the familiarity with the system and guys being more comfortable around each other.”

Not only are mistakes more likely to happen in the first game, Newsome, Ward and safety Ronnie Harrison Jr. missed time with injuries during training camp and the starting secondary didn’t play at all together in the preseason.

“Some of those communication things could have been from that, not being able to play in the preseason together as much,” Newsome said. “Game 2, we’ll definitely be ready to go.”

Walker made it clear the breakdowns were unacceptable.

“We want to kind of suffocate a team and put any energy that they have away and we gave them life and that’s why they were able to be in the game so long,” he said. “You’re able to go up 14-0, you’ve got to be able to put that game away and we weren’t able to do that. So I think a lot of guys feel the same way in the locker room that defensively we know how good we can be but we have to go out there and execute it, 60 minutes.”

After opening with narrow win, defense needs to eliminate breakdowns, offense must find answers for passing game
Perrion Winfrey inactive after being held out of practice Friday for disciplinary reasons