Notes: More opportunities should be on way for Amari Cooper 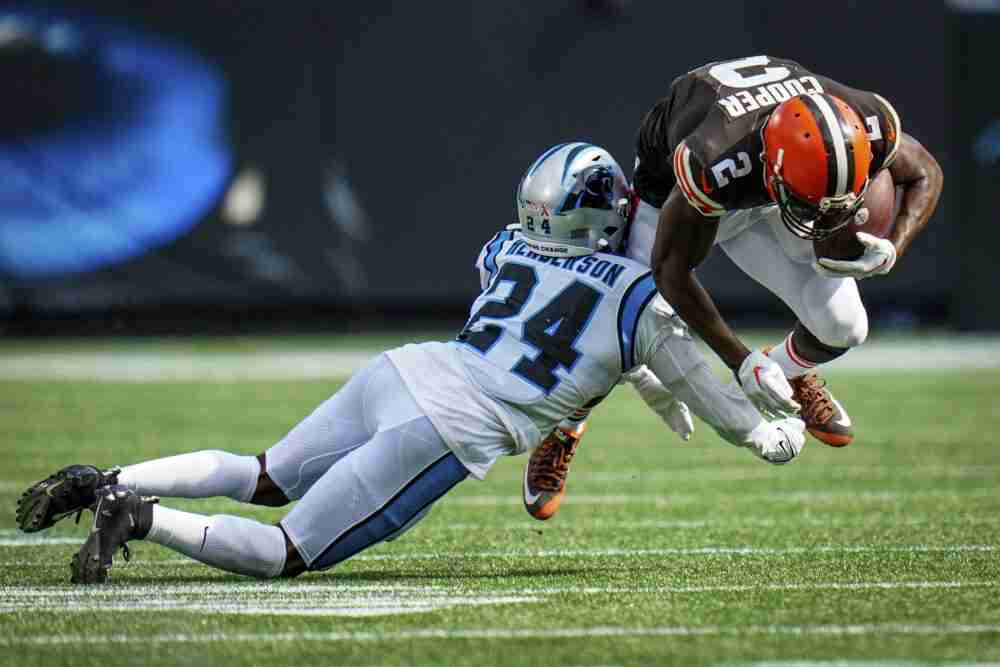 BEREA — Amari Cooper’s debut with the Browns was a statistical disappointment. He caught three of six targets for 17 yards in the 26-24 opening win over the Panthers.

The coaches weren’t satisfied with the number of opportunities for the four-time Pro Bowl receiver.

“Obviously want to get him the ball. He is our No. 1 guy,” coordinator Alex Van Pelt said Thursday. “Did not get him as many balls as we would like, but he created three penalties by his play style in that game that were big plays. Got us down to the 1-yard line on a great double move.


“He is contributing. It may not be in the production of catches, but he played a big role in us winning that game on Sunday.”

Cooper drew a 34-yard pass interference penalty in the end zone that set up a 1-yard touchdown pass to running back Kareem Hunt and two holding penalties that extended drives.

“You want to actually score the touchdown when you have the opportunity but, of course, just being able to give the team the opportunity to get closer, definitely we take satisfaction in that,” he said.

Cooper had a chance for another big play on the first drive when he beat cornerback Jaycee Horn so badly off the line he fell down. Cooper was wide open down the sideline, but quarterback Jacoby Brissett lofted the ball downfield and the safety got over to break up the pass.

“Usually on that route I release outside, but the corner jumped so far outside that I had to release inside,” Cooper said. “I just reacted to it and Jacoby wasn’t accustomed to seeing that look on that play.

“As far as can it be fixed, absolutely. The next time we see it I’m sure he’ll drill the ball right in there.”

Van Pelt said the key is repetition and getting comfortable with each other and the system.

“We created some separation in those situations and we will connect with those moving forward hopefully,” he said.

Cooper played 66 of 80 offensive snaps (82 percent) and felt involved, including as a decoy. But he would like more chances to contribute with catches.

“It’s important,” he said. “I think I had some good opportunities in the game, the thing is every time that somebody is supposed to get the ball outsiders might not know about it. Sometimes the defense, they’re in a coverage that prevents the person from getting the ball. The opportunities, they’re going to come. The defense is not always going to be in the perfect look, so just stay patient.”

Demetric Felton had a rough day returning punts vs. the Panthers. He muffed one, which was recovered by teammate Herb Miller, and was unsteady on two more. He fielded five for 29 return yards, with a long of 15.

“He just has to get out of his own head sometimes,” special teams coordinator Mike Priefer said. “He does not hit the seam and hit the return like we need him to, and I think he will and he has before.”

Priefer sounded as if Felton will get another chance. He was a sixth-round pick in 2021 and hadn’t returned punts in a game until his rookie year.

“I have a lot of confidence in him,” Priefer said. “He is an outstanding athlete that is still learning as a punt returner. You just can’t put the ball on the ground.

“Sometimes he is trying to do too much before he catches the ball and thinking too much ahead — two steps ahead instead of one. We will rein it back a little bit.”

The Browns signed veteran Chester Rogers to the practice squad this week and he could be an option at some point. He’s returned 90 punts with a 9.4-yard average and no touchdowns.

SKILLS FOR THE JOB

The coaches chose rookie running back Jerome Ford, a fifth-round pick, to return kickoffs over running back D’Ernest Johnson. That earned Ford a spot on the gameday roster while Johnson was inactive.

Priefer said Ford worked “extremely hard” during the summer to get ready after not returning kicks since high school.

“We spent a lot of hours together getting him prepared and we made the decision the night before the game,” Priefer said. “He has that running back vision. He has that toughness. He is going to run hard. He is going to make people miss. He is not afraid.

“I think he has enough speed to break a big one. He should help us there.”

Ford returned one kick vs. the Panthers for 29 yards.

Priefer grew up in Northeast Ohio and was asked his opinion of Brownie the Elf as the new midfield logo at FirstEnergy Stadium.

“Ball security, it is bad — he is not covering up the tip of the ball. That is the first thing I think of,” he said. “His hand is back here and the tip of the ball is exposed. I can’t believe they are going to put that at the 50-yard line.

“He will not be our returner, no.”

WHERE THERE’S A WILLS

Tight end David Njoku was excused from practice for a personal reason.

** Tackle Chris Hubbard didn’t practice with an illness. He was a full participant Wednesday.

** Rookie receiver Michael Woods II (illness) returned to practice for the first time since last Thursday and was a full participant.