Notes: Players excited for home opener, and David Njoku expects stadium to be ‘rockin’ like it’s our last days alive’ 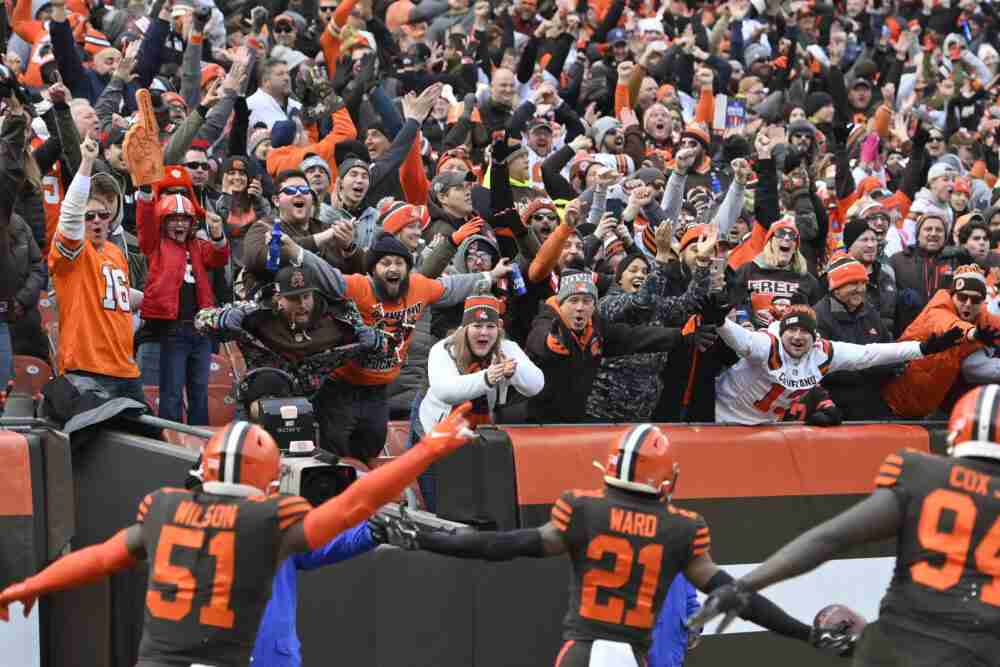 BEREA — The Browns, who have the chance to go 2-0 for the first time since 1993, are fired up about the home opener Sunday against the Jets.

“It’s always amazing to play in front of the Dawg Pound,” defensive end Myles Garrett said Friday. “I know we’ve got something special for our entrance this year. I’m trying to keep the game the game but I know it’s special to the young guys being able to go out and get introduced and be in front of that crowd for the first time.

“And I’m just looking forward to putting my best foot forward and maybe having a game where they can chant my name again.”


Tight end David Njoku put the pressure on the fans.

“I expect that stadium to be rockin’ like it’s our last days alive,” he said.

So did coach Kevin Stefanski.

“We expect the crowd to be raucous,” he said.

Rookie Perrion Winfrey held out of practice for disciplinary reasons

Cornerback Greg Newsome II flashed back to his introduction last year as a rookie.

“When they called out the defensive starters and they said my name and the crowd just erupts, there’s nothing like it, so I’m super excited to get out there,” he said.

Receiver Amari Cooper arrived in March in a trade and is eager for his first regular-season experience at FirstEnergy Stadium.

“From what everybody tells me, it’s a crazy atmosphere with a lot of diehard fans,” he said. “So I can’t wait. I know it’s going to be crazy out there.”

He was asked if he’d jump into the Dawg Pound if he scored a touchdown.

“I’ve never done anything like that before, so I’m not sure,” he said. “It depends on how I feel, I guess.”

Garrett paused for a long time when asked his opinion of Brownie the Elf as the new midfield logo.

“I don’t know what to think about that,” he said. “It’s original, it’s unique. I’ve always been more of a fan of the dog.

“I mean, we’re the Dawg Pound but we’ve got an elf and a helmet (as logos). I think we’re a little bit confused on what route we want to go creatively. But if we have something that everyone can stand behind as far as fans and we can rally behind it, I’m all for it.”

#Browns Myles Garrett on Brownie the Elf at midfield. pic.twitter.com/Om5wckQbnK

Stefanski wore a baseball hat with a silhouette of the elf when asked his thoughts on the midfield logo.

“Not my area of expertise,” he said. “Great decision, whoever’s decision it was. Are the fans happy about it?”

He was told the fans voted for it.

“Then I am happy about it. Sounds good,” he said.

Garrett was asked if he knew the history of the elf.

“Not at all,” he said before being informed the Browns won seven championships with the elf.

“If we get an eighth championship with that elf, I might come in here with a little elf outfit on,” he said, then walked away from the podium.

Njoku took exception to a comment made by Panthers defensive coordinator Phil Snow last week before the opener. Snow seemed to make a general statement about his defensive ends vs. tight ends, but Njoku took it personally.

“It was brought to my attention that in one of his press conferences he was mentioning how his D-ends and linebackers were going to dominate our tight ends,” Njoku said. “I did not like that. So I think it’s best we show the actions more than speak on what we’re going to do. I think we showed as a unit that we’re not afraid to get dirty and block.”

“My motivation comes from trying to just push myself to be the best teammate I could be, firstly,” he said. “I feel like that was just the cherry on top.”

Njoku had one catch for 7 yards vs. Carolina but drew praise for his blocking.

“A big part of us having any success on Sunday was tied directly a lot of times to No. 85 and what he was doing,” Stefanski said. “The opportunities in the pass game will certainly come, but most importantly, he is about trying to help this team win.”

Right tackle Jack Conklin (knee) was listed as questionable on the injury report.

“He is really, really close,” Stefanski said. “We will let the next 48 hours determine where we go.”

The Browns play the Steelers on Thursday night, so the team may not want to subject Conklin to two games in five days in his return from surgery to repair a torn patellar tendon.

** Tackle Chris Hubbard was ruled out with an illness. He didn’t practice Thursday or Friday.

** Linebacker Tony Fields II was excused from the beginning of practice.

Rookie Perrion Winfrey held out of practice for disciplinary reasons
Notes: Jacoby Brissett plays much better in Week 2 and fights through ankle injury