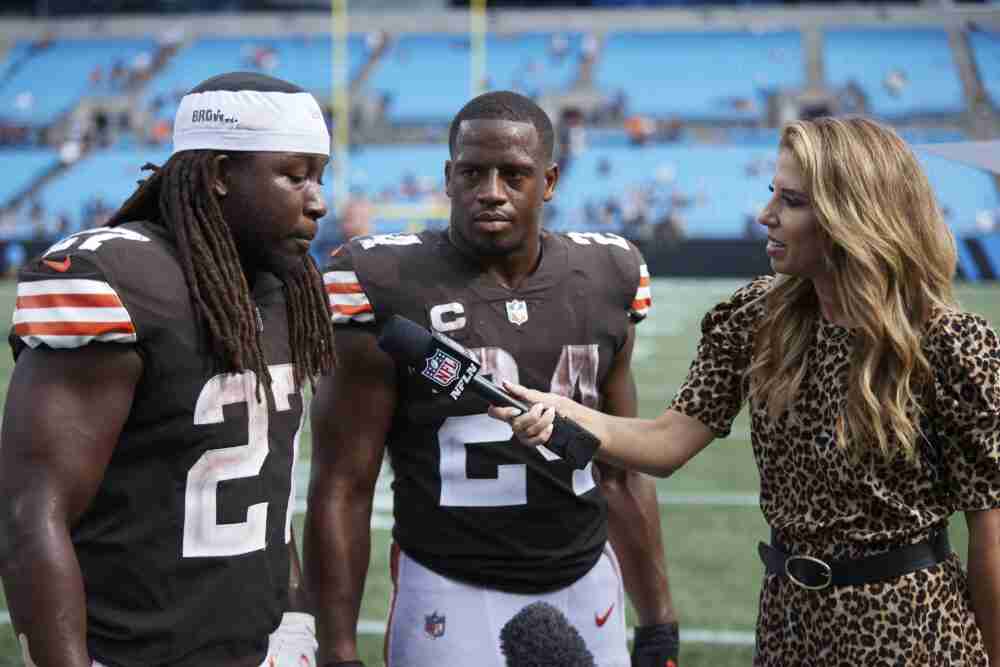 
The Jets, beginning Year 2 under coach Robert Saleh, held the Ravens to 63 rushing yards and a 3.0 average in a 24-9 opening loss, which are 110.7 and 2.1 below Baltimore’s averages since 2018. The Jets ranked 29th against the run last year (138.3, 4.5), but the Browns think they’ve turned the corner with defensive tackles Quinnen Williams and Solomon Thomas, ends Carl Lawson and John Franklin-Myers and linebacker C.J. Mosley.

“He is getting the type of guy he wants in there to play up in the front,” Browns offensive coordinator Alex Van Pelt said of Saleh. “I know in that system the front is a big part of what happens on that defense. They are starting to stack up a lot of good players up there right now.”

The Browns need to be able to run effectively as quarterback Jacoby Brissett and the pass game work to get comfortable. Nick Chubb led the way with 141 yards and a 6.4 average against the Panthers, and Kareem Hunt added 11 carries for 46 yards and a touchdown. They shared the field for eight snaps, which gives the Jets one more thing to think about.

“Both individual runners are tremendous runners. If it is a mismatch for the defense, then it is something that we can use,” Van Pelt said.

The Browns expect tough sledding as the Jets make stopping the run a priority — as every team is likely to do until the passing game proves itself.

“Oh, it is a huge challenge,” left guard Joel Bitonio said. “They have a really strong front seven and they rotate guys so they are always fresh. We have to bring our lunch pail and be ready to work.”

Brissett believes the Browns can have success on the ground even if the Jets crowd the line of scrimmage.

“I think we have the confidence in the guys to say that and to do that,” he said. “We look forward to those challenges.”

One game is only a snapshot, but it was nonetheless surprising to see No. 1 receiver Amari Cooper (three catches, six targets, 17 yards) and No. 1 tight end David Njoku (one catch, one target, 7 yards) not have a greater impact in the passing game. Cooper did draw three penalties, including a 34-yard pass interference in the end zone that led to a touchdown, and Njoku was a force blocking and had a catch negated by a penalty, but Brissett it expected to get them more involved vs. the Jets. After all, Cooper’s being paid $20 million and Njoku $13.7 million to catch the ball.

“Yeah, without a doubt,” coach Kevin Stefanski said. “I do think that those things will all even out in terms of touches.”

Van Pelt said the Panthers didn’t double-team Njoku and he was running open deep on the one sack of Brissett, who didn’t have time to get the ball downfield.

“David did a great job in the run game,” Brissett said. “Obviously he did not get as many touches as he would want, but it is part of the game. It is no, ‘Hold up. Let’s force the ball to somebody.’ We had a couple of chances. I missed him on a couple, but it is the first game of the season. We have a long way to go. It is things that myself, him and us as an offense are working on to spread the ball around to as many people as we can.”

The passing game needs to be better overall after Brissett threw for 147 yards, 4.3 an attempt. The Jets will make it difficult with a talented secondary that includes cornerbacks Sauce Gardner, the No. 4 pick in April, and D.J. Reed.

“They’re good,” Cooper said of the Jets defensive backs. “You’ve got a first-round pick, you’ve got a guy who’s really scrappy. Those guys are in the NFL for a reason, they make plays, they’re very instinctive, all of them have good speed, good ball skills, good traits. I’m excited to be able to go up against them on Sunday.”

BACK IN THE BUCKEYE STATE

Jets rookie receiver Garrett Wilson got off to a solid start, catching four passes for 52 yards in his debut. The No. 10 pick caught 70 passes for 1,058 yards and 12 touchdowns last year at Ohio State and joined a Jets receiving corps that includes Corey Davis, Elijah Moore and Braxton Berrios.

“He’s very polished for a young receiver,” cornerback Greg Newsome II said of Wilson. “He can run great routes. He’s great at the point of attack and he’s a very fast player, too. He can take the top off of defenses.”

Newsome, a Northwestern alum, faced him in the Big Ten title game.

The Browns will counter New York’s receivers with cornerbacks Newsome, Denzel Ward and rookie Martin Emerson Jr. Ward was ahead of Wilson at Ohio State and doesn’t know him personally.

“He’s a talented player, you can definitely see what he can do when he gets the ball in his hands,” Ward said. “I think he’ll be a great player in his league.”

Joe Flacco, 37, will start at quarterback for New York as Zach Wilson continues to recovery from knee surgery. Flacco doesn’t have much mobility but can still throw the ball accurately and deep.

“He is still a great player,” Stefanski said. “He can make every throw. He still has unbelievable arm talent. He makes great decisions. He sees it very clearly.”

The Ravens got the lead on the Jets and Flacco threw 59 times, completing 37 for 309 yards, a touchdown, an interception, three sacks and a 74.8 passer rating.

“If he’s forced to throw that much, I know we have some D-linemen that will be super happy,” Newsome said. “We’re going to play our technique. Whatever he does, we’ll be ready to defend him.”

Consecutive games for the Jets vs. the AFC North to open the season.

Cleveland’s record under coach Kevin Stefanski when tying or winning the turnover battle.

Years since the Browns started a season 2-0.