Cade York built to boot balls into atmosphere, stay grounded while given the rock star treatment 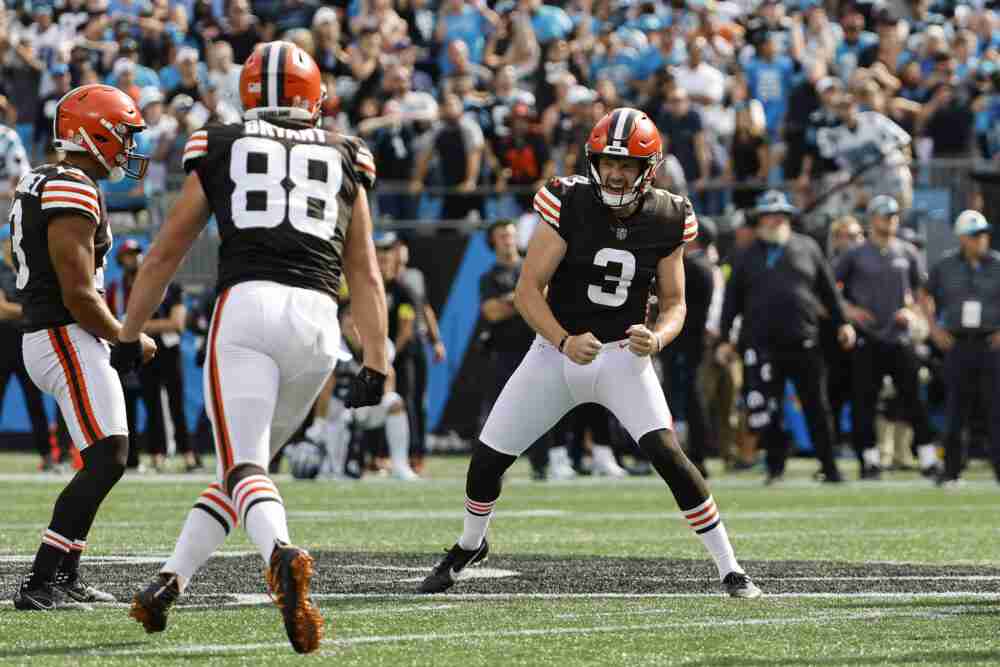 He’s got the name. Two syllables and easy to remember.

He’s got the leg. It strikes the ball like a thunderbolt.

He plays the right position. The best kickers are beloved forever.

He’s in the right town. Northeast Ohioans are crazy about their Browns and desperate to see a kicker succeed.


Rookie Cade York might be so popular already that fans leave the party in the Muni Lot to watch him warm up. If he hasn’t reached that status yet, he took a giant step in that direction last week in Carolina.

He played a picturesque right-to-left draw that split the uprights from 58 yards for the winning field goal with eight seconds left in the 26-24 decision that snapped the 17-year winless drought in season openers and saved quarterback Jacoby Brissett and the defense from a week of blame for an embarrassing loss to Baker Mayfield.

York T-shirts — I Heart Cade York; Cade Called Game — should be in abundance Sunday when the Browns host the Jets. The home opener is always cause for excitement and celebration, and York adds a lot of juice.

“I am sure he is going to get a standing ovation as soon as he goes out there for that first PAT or that first kickoff,” special teams coordinator Mike Priefer said Thursday.

TOAST OF THE TOWN

Browns fans have been enamored with York since general manager Andrew Berry selected him in the fourth round April 30. He’s seen as the stopper to the revolving door at kicker since Phil Dawson left in 2013 after 14 years. The Browns haven’t had a kicker complete two full seasons since, and fans grew weary of watching close games drift away like a kick wide right from 45 yards.

The infatuation with York grew when fans began to see him in person, or at least hear about the nearly perfect performance in training camp that included rocket after rocket through the goalposts. Then came the 70-yard make during pregame at FirstEnergy Stadium in the preseason.

“I started getting that sense in training camp,” longtime long snapper Charley Hughlett said. “You’d hear the fans kind of cheering him on and stuff like that, which is really cool.

“You also get the sense whenever fans aren’t as confident in a kicker and I’ve been out there for that, too, so it’s nice that they’re behind him. I’m sure he’ll embrace it and I’m sure he’ll continue to succeed.”

York, who made four field goals and two extra points in his NFL debut, said he’s off social media for the season so he doesn’t get the full sense of the frenzy following the winner in Carolina — the longest field goal for a rookie in Week 1 in NFL history and second-longest in Browns history. He got a taste Monday at the Taste of the Browns fundraising event.

“That was an interesting time,” he said. “I’m very thankful for all the people that are encouraging, but also I’m very aware of sports are about what you’re doing for me lately. The week is over, it’s the Jets now, so I have to move on.”

Was the reaction overwhelming?

The answer is typical York. Direct and understated.

He’s 21 years old, but coaches and teammates rave about his maturity. That will be tested by his quick fame, including winning AFC Special Teams Player of the Week.

“It’s definitely something you have to think about, but I think Prief, I think Coach (Kevin) Stefanski, I think Charley in his room are all guys that he can lean on and be like, ‘all right, we had a great play, we celebrated it, we won the game, he kicked well, let’s move on to the next week so we can build on it,’” All-Pro left guard Joel Bitonio said.

“I think he can handle it,” Priefer said. “He knows why he is good. It is not just because God gave him a great leg — that is one of the main reasons — but he is going to continue to improve and continue to work and really try to be the most consistent kicker he can be.”

Stefanski kept his analysis simple, saying York has his “head on straight” and knows he needs to keep working. Greg McMahon coached York for three years at LSU and went deeper on the reasons York won’t get a big head from the cheers and attention.

“And he knows those same group of people if you miss a kick would be the same people that won’t cheer for you. So I think he’s really good about trying to control what he can control, and that’s his work ethic, his commitment to his craft, and anything that stands in the way of him performing at the highest level he tries to get rid of.”

Notes: Players excited for home opener, and David Njoku expects stadium to be ‘rockin’ like it’s our last days alive’

York has been preparing for life in the NFL and the kick in Carolina for years. The former soccer player began attending Kohl’s Professional Camps about midway through high school.

“He was tall, he was skinny and then obviously really started to make some progress leg talent-wise. The ball started to jump,” Luke Radke, Kohl’s national lead coach and evaluator, told The Chronicle by phone. “He’s had a lot of success. It’s been fun to see it, to be a part of the journey,”

The kicking camp’s curriculum includes preparing for the psychological challenges that come with the pressure of the job.

“One of the big core tenants that we always try to impress upon kids is the mental toughness,” Radke said. “The true separating factor is it’s not necessarily how good the A ball is, it’s how good the B ball is. And that’s where he’s really made the most increases.”

York has trained with and learned from Saints kicker Will Lutz, a former Pro Bowler, and Dolphins punter Thomas Morstead, which is another reason the moment hasn’t been too big for him.

“The expectations are real high and he embraces them,” McMahon said. “He’s been around these high expectations and he always seems to do well in them.”

The 58-yarder vs. the Panthers wasn’t an aberration. York made a 59-yarder in the high school Under Armour All-America Game and a 57-yarder in the fog in The Swamp to beat Florida while at LSU.

“The pressure-filled moments, he really seemed to step up and do well in,” Radke said. “You just start to see those moments. Probably the biggest just kind of affirmation that he was gonna be a dude was against Florida, it was him against (Evan) McPherson, kind of the kicker battle of all kicker battles, especially for a kicking coach/nerd like myself.

“It’s eerie, it’s foggy and he smashes that 57-yard field goal to win the game. OK, there’s not many guys that really just openly relish the opportunity to step in there and perform like that.”

The Browns hope to avoid needing another late escape vs. the Jets as they try to go 2-0 for the first time since 1993. But it wouldn’t be a surprise to see York attempt a field goal at some point from the new Brownie the Elf logo at midfield.

Cleveland Mayor Justin Bibb tweeted about him, so the legend may just be taking off.

“It is great for him, it is great for the city,” Priefer said of the town embracing a kicker. “It is the greatest city in the world. I keep telling you guys this is God’s country.”

“Oh, I had no idea he even had a T-shirt,” Hughlett said. “It is very cool, though. I’m very happy for him. Obviously I want him to be successful because I want to have a unit that sticks together and we can all grow and get better together.”

York couldn’t be off to a better start.