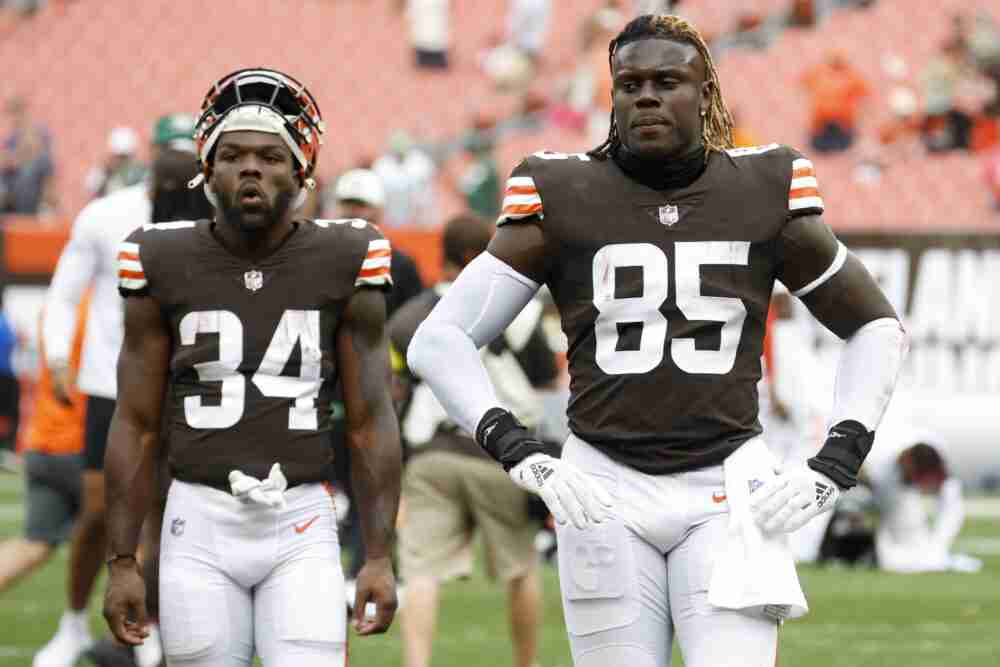 How can you lose an un-lose-able game?

Quit playing before it’s over.

In one of the most embarrassing losses in franchise history — one that isn’t going to be forgotten very soon — the Browns on Sunday punched out before the game was over, and, in less than the blink of an eye, gift-wrapped a hideous 31-30 victory to the hapless New York Jets, losers of 14 of their last 18 games.


Rightfully thinking the game was in the bag, a good portion of the stadium crowd had already left Haslam Acres when the Browns, much to the delight of the Jets, decided to knock off early.

The visitors, with almost no resistance at all from their hosts, rolled to two touchdowns in the span of 60 seconds to turn a late 30-17 Cleveland lead into a humiliating 31-30 Cleveland loss.

It was the kind of gruesomely heinous loss that, in NFL annals, has occasionally cost people their jobs.

Kevin Stefanski is in no danger of losing his. But that didn’t make it any easier for him to watch Denzel Ward and Grant Delpit going the wrong way — John Candy and Steve Martin style — as grateful Jets receiver Corey Davis breezed past both, down the right sideline to catch a 66-yard touchdown pass from Joe Flacco that turned a 30-17 Cleveland lead into a 30-24 rumbling volcano.

Then came the lava.

The Jets, naturally, followed with an onside kick. The Browns, naturally, failed to cover the ball. Flacco then directed a crisp 10-play, 53-yard touchdown drive that ended with a 15-yard bull’s-eye to Garrett Wilson for the knockout punch.

And Freddie Kitchens and Hue Jackson were nowhere in sight.

“Everybody is going to want to point fingers and say, ‘Whose fault was this?’ Put it on everybody,” Stefanski said. “It is all of us, me, coaches and players. It is everybody.”

There aren’t enough fingers to point after this one. Following the Browns’ last touchdown, a 12-yard paydirt blaster by Nick Chubb that gave Cleveland a 30-17 lead, Thunder Foot Cade York, the Week 1 hero, missed the extra point. The Browns lost by one point.

Later still, trailing 31-30, lumbering Jacoby Brissett, in his best performance yet as the Browns backup quarterback (22-for-27, 229 yards and a touchdown), scrambled for 21 yards to the Cleveland 46-yard-line.

The Browns were closing in on Yorktown, and, perhaps, a second consecutive long-distance, last-second, game-winning field goal.

But on the next play Brissett threw an interception, and the collapse was complete.

It’s a loss you’ll tell your grandchildren about.

“We didn’t win the game. Ultimately, that is my job,” said Stefanski. “I need to win that game for this football team. For our fans … it is really tough to watch.”

Stefanski said he didn’t think the Browns checked out early, thinking they had the game won. That’s exactly what a coach is supposed to say. The line of cars leaving the parking lot says it for him.

“We had a lot of conversations on the sideline about what was about to occur (on the game-winning touchdown pass to Wilson),” Stefanski said, “how we needed to defend what they were about to do.”

Then the Browns went out and didn’t do it.

Stefanski would never say it, but what hurts the most is that the Browns gave away a game to one of the three meatballs in the early part of their schedule: three of their first four games are against the Panthers, Jets and Falcons. A team staring at 11 consecutive games of trying to win with a backup quarterback, cannot afford to lose any gimme games. The Browns almost lost the first one, and they did lose the second one.

Pittsburgh is next, Thursday night, then come the Falcons. In order to get to 3-1, the Browns are going to have to beat the Steelers and Falcons. Because after that, you’re looking at the Chargers, Ravens, Bengals and Buccaneers.

There were some bright spots Sunday. Despite the interception, Brissett was much better than in his debut in Carolina. It helped that he finally discovered Amari Cooper, who caught nine balls for 101 yards and a touchdown.

But Sunday’s loss is going to linger, and the players know it.

“The whole team let up in the 11th hour,” said Myles Garrett.

With a two-touchdown lead, late in the fourth quarter against an inferior opponent, instead of closing the deal, the Browns closed up shop.