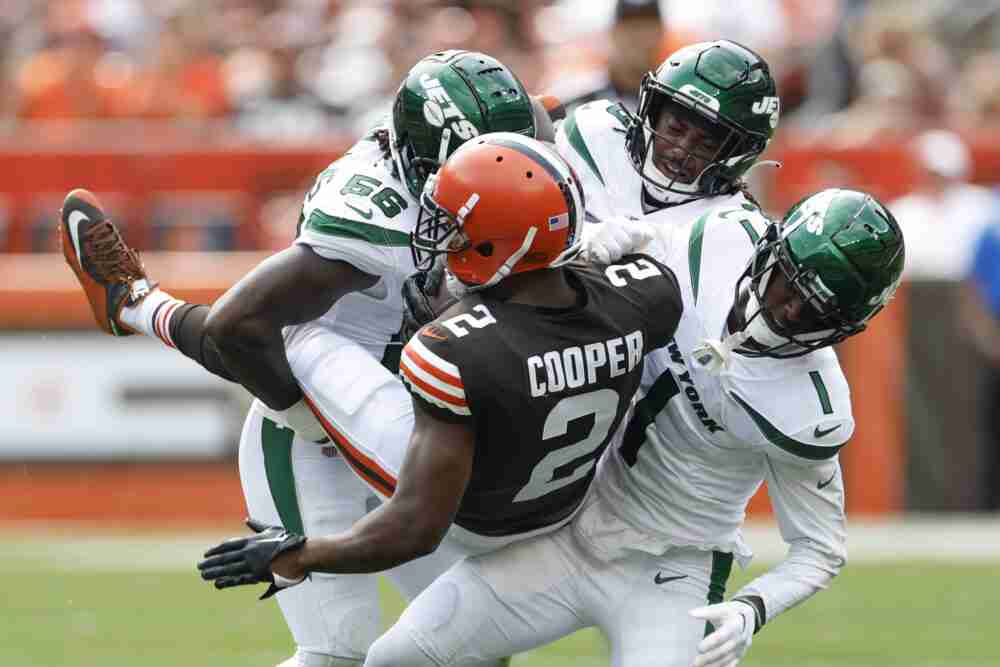 CLEVELAND — The Browns were the last NFL team to lose a game in which they led by at least 13 points with 83 seconds left.

Eight coaches, 29 starting quarterbacks and 21 years later, the Browns had another epic collapse worthy of the franchise’s hall of horrors.

This one came in the home opener Sunday, left fans booing — which didn’t sit well with Myles Garrett — and cost the Browns their first 2-0 start since 1993.

The Browns were staggered by how quickly the seemingly certain win turned into an unfathomable loss.

He wasn’t alone. Since the Browns blew a 14-point lead in the last 28 seconds in Week 8 in 2001 at Chicago, NFL teams had won 2,229 straight games with a 13-point lead and at least 83 seconds remaining, according to ESPN Stats and Information.

The Browns (1-1) don’t have much time to recover with the Steelers coming to town Thursday night.

“Something like that you don’t imagine happening to you and then you see the little stuff and the details and technique really get to you,” said Garrett, who had one sack to move within a half-sack of Clay Matthews’ official franchise record of 62.

If he had gone down at the 1-yard line after reaching the 2 for a first down, rather than score for the third time, the Browns would’ve been able to take three knees and close out a 24-17 victory. Chubb stopped short of scoring two years ago in a similar situation.

“That is a scenario where that is on me to communicate that to the huddle,” coach Kevin Stefanski said. “We have done that before. Having said that, we need to close that game out.”

“I’ve never been so happy for a missed tackle in my life,” coach Robert Saleh said. “That was our only chance.”

Rookie Cade York, who rescued the Browns with the winning 58-yard field goal in the opener in Carolina a week earlier, missed the extra point wide right to keep the score 30-17. The lead should’ve been safe, but scarred Browns fans might have sensed what was to come.

“The games are so close, you’ve got to make everything you can,” York said.

The Jets (1-1) needed only two plays and 33 seconds for a touchdown. Despite the situation in the game and instruction from the coaches, the secondary allowed receiver Corey Davis to run free down the right sideline for a 66-yard touchdown catch from Joe Flacco with 1:22 left. Pro Bowl cornerback Denzel Ward stopped as Davis ran by, and safety Grant Delpit didn’t pick up Davis.

“Those kinds of plays are unacceptable, that is without a doubt,” Garrett said.

Safety John Johnson III raised his arms in a combination of disgust and disbelief. The secondary had the same communication issues early last season, in the opener against the Panthers and on a Breece Hall 10-yard touchdown catch in the second quarter that tied the game at 14.

“It was very, very clear what we were doing,” Stefanski said. “We talked about it on the sideline before everybody went out and talked to the entire defense about what they were about to do, which was try and throw it over our head. We can’t let that happen.

“We have a young football team, and unfortunately that youth at times has shown up here, and we have to grow up real fast.”

Greg Zuerlein’s extra point made it 30-24. The Jets’ next kick continued Cleveland’s crumble.

The Browns called timeout after the Jets lined up for the onside kick to set up their “hands team.” Punter Braden Mann looked right, turned and kicked it left. Browns receiver Amari Cooper waited for the ball to arrive near the Jets sideline, and New York safety Will Parks beat him to the ball, funneling it back toward the middle of the field where Justin Hardee recovered with 1:20 left.

Flacco, who improved to 18-3 vs. the Browns, capped the following nine-play, 53-yard drive with a 15-yard touchdown pass to rookie receiver Garrett Wilson, who got behind linebacker Jeremiah Owusu-Koramoah over the middle with 22 seconds left.

Zuerlein made the winning extra point. He tied a franchise record earlier with a 57-yard field goal.

Cleveland’s last chance ended with an interception by Jacoby Brissett with six seconds left as the offense needed 14 yards for York to try another 58-yarder.

Garrett was asked if this type of loss is worse because it came in the home opener in front of a sellout crowd of 67,431.

“The more disappointing thing was the booing at the end,” he said. “Of course, we’d want to win. Of course, we wanted to play out the game and it end 30-16 or 30-17 or whatever it was, we get a pick or a strip-sack and end the game. But that’s not always how it goes. These guys are still putting their (rear ends) on the line and playing as hard as they can, and they should be respected as such.

“It’s two games and we have plenty more games to play, especially this next one coming up with the home crowd. We have a lot of time to correct what we’re doing, so we don’t want to see this crowd, this stadium give up on us this early. We want to see them completely behind us. And it’s disappointing for everybody, but it’s absolutely disappointing for us as a team just knowing that we had them with our foot on their throat and we didn’t finish them, and that’s completely on us. We’ll learn from this and correct it and come back stronger.”

Overshadowed by the atrocity of the last two minutes were otherwise strong performances from Brissett, Chubb and Cooper.

Brissett bounced back from a shaky opener, going 22-for-27 for 229 yards, a touchdown, an interception, a sack and a 98.9 passer rating. He also looked quicker, running six times for 43 yards, including a 21-yard scramble to start the final possession. He played through an ankle injury suffered in the fourth quarter.

After Cooper had only three catches for 17 yards against the Panthers — he also drew three penalties — he caught nine of 10 targets for 101 yards, including a 6-yard touchdown that gave the Browns a 14-7 lead midway through the second quarter.

Chubb rushed 17 times for 87 yards, a 5.1 average and three touchdowns. Running back Kareem Hunt added 13 carries for 58 yards and two catches for 16 yards and wasn’t on the field at all with Chubb.

Defensive end Jadeveon Clowney left the game in the third quarter with an ankle injury and exited the stadium in a walking boot. He had a strip-sack and fumble recovery in the first half that stopped a Jets drive that had reached the red zone.

After ending their winless streak in openers at 17 games, the Browns blew the chance to capitalize on the momentum. The opening four games are the softest part of the schedule, and the Browns must take advantage.

“The sun is going to come up tomorrow. I think the guys understand that, and we have to get ready to go on a short week.”