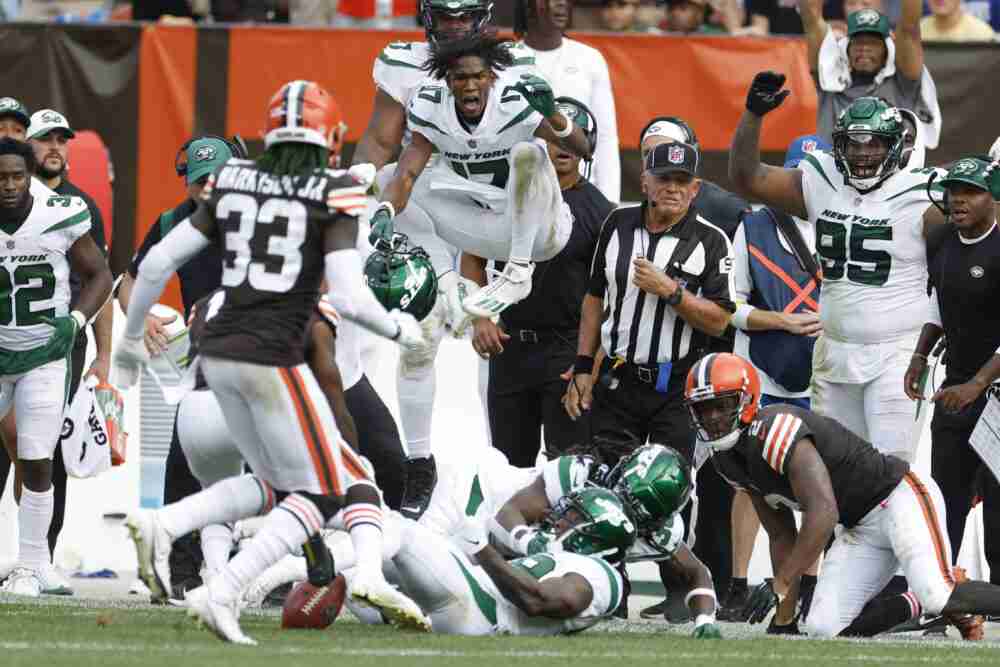 CLEVELAND — The special teams units have limited opportunities to make an impact. And when mistakes happen, they are magnified.

One special teams error can be costly. As the Browns found out Sunday, three miscues, including two in the fourth quarter, are too much to overcome.

After allowing a successful fake punt pass and rookie Cade York missing an extra point, the Browns gave up an onside kick recovery with 1:20 left that set up the New York Jets for their winning touchdown drive and an unlikely 31-30 victory at FirstEnergy Stadium.


“We have to play a 60-minute football game, and we did not do that,” receiver Amari Cooper said.

“That’s the NFL for you. It’s a tough one,” left guard Joel Bitonio said. “Every loss is tough. This was especially tough. We thought it was in the bag, and we just didn’t do enough. We didn’t play 60 minutes. We played 58 minutes, and just didn’t have enough tonight.”

The special teams issues started late in the first quarter.

On fourth-and-2 from their 46-yard line, the Jets executed a fake punt, as Braden Mann completed a 17-yard pass to backup receiver Jeff Smith with cornerback A.J. Green in coverage. Six plays later, quarterback Joe Flacco completed a 2-yard touchdown to rookie receiver Garrett Wilson to tie the game at 7.

“I’m really happy for him and a lot of the guys on our team,” Flacco said of Wilson. “We’ve known that the lights aren’t too big for him, that he has already grown up and is capable of playing in this league, but you really aren’t going to have people be able to say that about you until you will football games.”

The Browns looked as though they would get away with that early miscue, as they scored 23 of the next 33 points and held a 30-17 advantage with 1:55 remaining. After Nick Chubb sprinted for a 12-yard touchdown, York, the reigning AFC Special Teams Player of the Week, pushed the kick wide right.

“I tried to make sure I didn’t get complacent, and it was not like I went out there and wasn’t ready,” said York, who made a 22-yard field goal and three extra points. “I don’t know what happened. I have to go back and look at it. I thought I hit it well, and it just didn’t go in.”

On the ensuing drive, the Jets scored in two plays thanks to a 66-yard touchdown from Flacco to receiver Corey Davis.

It touchdown set up an onside kick, and Mann hit it well enough to go the required 10 yards. New York safety Will Parks beat Cooper to the ball and forced it back toward the middle of the field where Justin Hardee recovered at the Jets 46-yard line with 1:20 left.

“There’s a tool, you can bat the ball out of bounds if you need to,” Browns safety John Johnson III said. “I think we probably should have used that tool. I didn’t see it. I’m in the middle, literally right over the ball, so I was kind of trying to block my man. I didn’t really see what happened. Most likely, we should have batted it out of bounds.”

The Jets took advantage with a nine-play, 53-yard drive that Flacco capped with a 15-yard touchdown to Wilson, a star player for Ohio State taken with the No. 10 pick in the draft.

Kicker Greg Zuerlein made the go-ahead extra point with only 22 seconds remaining.

“I went crazy,” Wilson said of the onside kick recovery. “I’m sure there will be a TV clip. I went absolutely crazy on the sideline. I didn’t want my drop to be the reason why we lost the game. Defense kept coming through, making plays, and that was huge.

“I don’t want to say we thought we were going to lose, but when we looked at the score, we were down 13 with 1:30 left. Your chances are not too hot. Luckily, they had some miscues. They messed up, and we have to take advantage when they do.”