Analysis: Browns mismanaged clock, but that doesn’t excuse another blunder by secondary 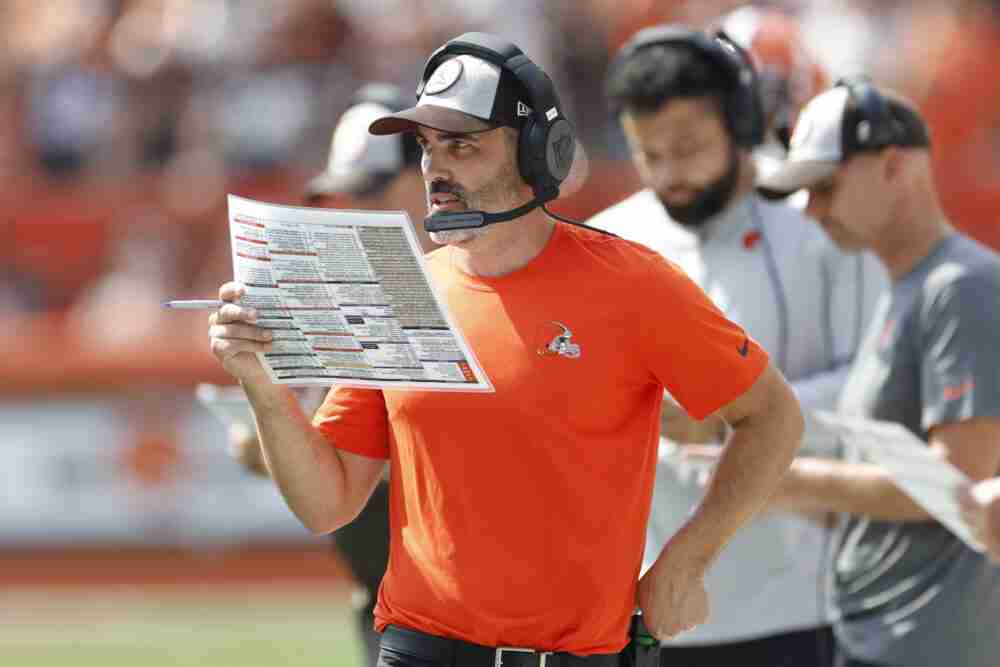 The 31-30 loss to the Jets remained difficult to comprehend 24 hours later, even though the facts were indisputable.

The Browns led 30-17 with 1:55 left in the home opener Sunday. Then came a missed extra point by Cade York, a 66-yard Jets touchdown pass when the Brown busted another coverage, a successful onside kick, another Jets touchdown drive and finally a Jacoby Brissett interception with six seconds left.

Jadeveon Clowney ruled out for Steelers game with ankle injury

The hows, whys and aftermath of the collapse — the first of this magnitude in the NFL since the Browns squandered a 14-point lead in the last 30 seconds in 2001 — were less clear.


The road to defeat actually began with a touchdown.

Nobody is blaming Nick Chubb for the loss. But coach Kevin Stefanski is absolutely correct in wishing he had told his running back to not score his third touchdown of the day with 1:55 left. He’s also right when he says it shouldn’t have mattered that he did.

“Putting yourself up potentially 14 points inside of two minutes, you should close out that game,” Stefanski said Monday on Zoom. “Yes, I wish I had said that to Nick and Nick would have done it, but it does not change the fact that we had plenty of opportunities to win that game.”

Stefanski noted the Browns have called and executed “no mas” in the past, meaning pick up the first down but don’t score. The most obvious example was in 2020 during a 10-7 win over Houston in which Chubb broke a long run and stepped out of bounds before the end zone.

“No, I did not,” he said. “I do want to be clear on this one — I absolutely could have told him that in that situation.”

If the Browns had managed the clock better, the collapse wouldn’t have had a chance to happen.

The Jets used their final timeout with 2:09 left. One more first down for the Browns should’ve allowed them to take three knees and run out the clock, but Kareem Hunt couldn’t stay inbounds on a 12-yard run to the 12-yard line, leaving 2:02 on the clock.

With the two-minute warning looming, the Browns needed an extra first down to erase any doubt. Chubb got it but scored instead of going down or out of bounds inside the 2.

He’s a team-first player who may not have realized the situation. It falls on Stefanski to make sure quarterback Jacoby Brissett has informed the huddle.

The Jets viewed the touchdown as a chance at a comeback, however unlikely. That’s enough to know not scoring would’ve been the smartest thing to do.

The touchdown discussion doesn’t remove any responsibility from the defense and special teams.

York’s extra point attempt pushed wide right kept the lead at 13 points and wound up being the difference between a regulation loss and either overtime or the Jets going for two points and the win after a touchdown with 22 seconds left.

Much more important was the blown coverage on the second play of New York’s next drive. The Browns needed to make the Jets spend precious time to march down the field. Instead, they allowed a 66-yard touchdown pass from Joe Flacco to Corey Davis down the right sideline.

Stefanski said coordinator Joe Woods’ call was the right one for the situation. So blame the execution.

“I am not going to get into the responsibilities and those type of things because I just don’t see that as productive,” Stefanski said. “The bottom line is that should never happen. We have to be able to defend the pass in those obvious passing situations.

“That is the only way that we could have let them back in that game.”

Cornerback Denzel Ward was lined up in front of Davis but didn’t follow him down the sideline. Safety Grant Delpit was on that side of the field but started the play only 15 yards off the line of scrimmage and didn’t drop deep or wide enough.

“I was playing the flat. I was playing like a Cover-2 cloud corner,” Ward said referring to a common zone coverage. “It wasn’t my coverage or whatever.

“But if there’s someone you want to blame, I’ll take full blame for that play or whatever plays that we had, but I think the biggest thing is we all just need to get on the same page.”

Ward tweeted earlier Monday at a football analyst who said Sunday was the first time Ward had allowed 100 yards in college or the NFL.

“lol I was only targeted on time yesterday,” Ward replied on Twitter. “A lot of fake news out there. People don’t know what they don’t know”

Ward’s comment and tweet seem to indict Delpit for not being in the correct coverage. Delpit repeatedly answered questions about the play with “communication error,” including when asked what his assignment was.

“I am not going to play the blame game with my teammates, so I am just going to leave it as it was a communication error,” he said when told of Ward’s comments.

Fans love to pile on coordinator Joe Woods when the defense makes a mistake, but Ward agreed with Stefanski that the play call wasn’t the problem.

“If all our guys were in position, we’re more than capable of making the plays that come to us,” Ward said.

After the game and again Monday, the defensive backs stressed the need to overcommunicate to make sure everyone’s got the correct call. Delpit said the problem was among the players and not from the coaches to the players.

Ward and Delpit were in the middle of things on another Jets touchdown. On third-and-goal from the 10 with 15 seconds left in the first half, Ward started on Davis, appeared to hand him off as he cut toward the middle but didn’t get wide as Breece Hall caught a swing pass out of the backfield and scored easily. Delpit was late getting over.

“I’m gonna have to go back and see what happened. Like you said, I was on Corey Davis,” Ward said.

“We’ve got to have a flat player,” Delpit said.

If the coaches want to make a switch in the secondary, going with Ronnie Harrison Jr. as the second safety ahead of Delpit would be the most logical.

“You are always looking for the right lineup out there that gives you the best chance,” Stefanski said when asked about potential personnel changes. “Let me be very clear, anything that happens out there, I have to get fixed. That is on me.”

The onside kicked followed the 66-yard touchdown. Receiver Amari Cooper tried to knock the ball out of bounds, but New York’s Will Parks was more aggressive, got to the ball first and kept it in play for a teammate to recover.

“We just have to find a way in those situations to make a play, find a way to get the ball out of bounds on a kick,” Stefanski said.

The excruciating nature of the loss made it impossible for the Browns to quickly dismiss it. Stefanski’s mission was to shift the focus to the game vs. the Steelers on Thursday night at FirstEnergy Stadium.

“Guys should be frustrated, it was a tough loss,” Ward said. “We were in position to win the game and we’ve just got to find a way to finish and play a full 60-minute game. So just got to use that as fire and come back focused this next week, fix those corrections and try to find a way to get win.”