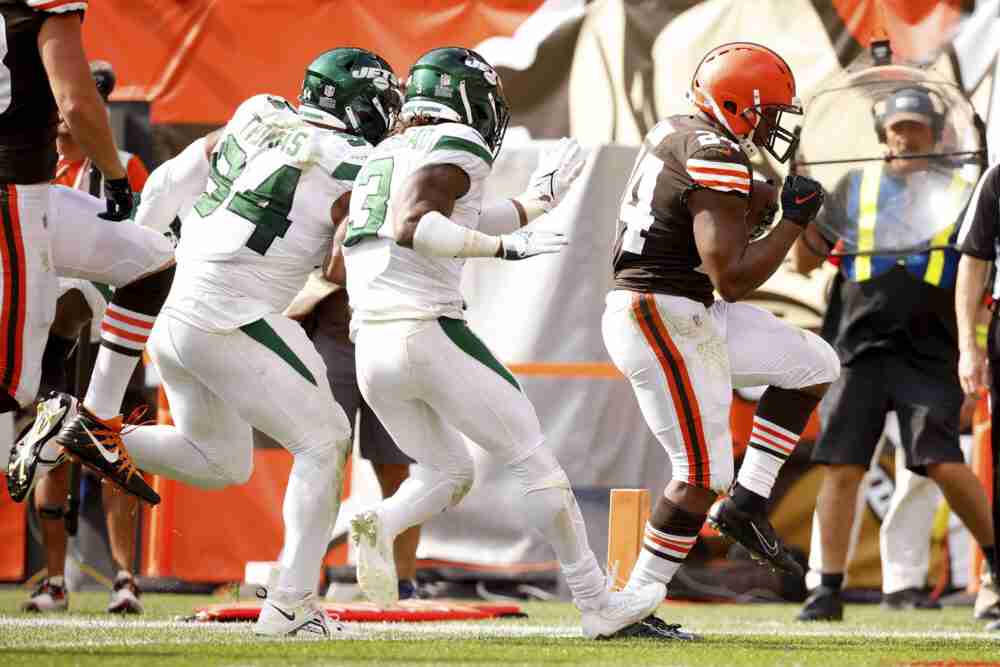 BEREA — When Nick Chubb reflected on all that went wrong Sunday in the final two minutes of the 31-30 loss to the New York Jets, he began to realize something.

“I probably shouldn’t have scored right there, honestly looking back at it,” the Pro Bowl running back said of his third touchdown. “It cost us the game.

“A lot of things went wrong, not just one thing. But collectively as a unit, as a team we could have all done things different, but it’s only a problem because we didn’t win. So I probably should have went down.”

Analysis: Browns mismanaged clock, but that doesn’t excuse another blunder by secondary


The play in question started with 2:02 left in the home opener at FirstEnergy Stadium. On first-and-10 from the Jets 12-yard line, Chubb went around the left side, cut back along the sideline and scored with 1:55 left for a 30-17 lead.

If he had run out of bounds or gone down after picking up the first down at the 2, the Browns would’ve been able to kneel three times to finish off a 24-17 victory and improve to 2-0 for the first time since 1993. The touchdown allowed the Jets possession of the ball and a chance for the comeback.

“I didn’t think about it until we lost, then I had to reflect on it and see what we could have done things different, and that was definitely one of them,” Chubb said.

The 13-point lead should’ve been good enough, but the comedy of errors that followed allowed the Jets to complete the improbable rally. Cade York missed an extra point, the secondary blew the coverage on a 66-yard Jets touchdown pass and receiver Amari Cooper failed to recover an onside kick that set up New York’s winning touchdown drive.

The debacle ended with Jacoby Brissett throwing an interception with six seconds left.

Chubb had company in owning the mistakes.

“It was my play to make and I didn’t make it, to sum it up in a few words,” Cooper said.

“I take the blame for that,” linebacker Jeremiah Owusu-Koramoah said of a Jets touchdown pass to end the first half in which running back Breece Hall was left open in the flat.

The Chubb touchdown has received a ton of attention. While it was a positive play that capped another strong personal performance and expanded the lead, if he hadn’t scored, the egregious blunders on defense and special teams would never have happened.

He was in a similar spot in 2020 in a 10-7 win over the Texans and stepped out of bounds after a long run to seal the victory.

“The game was a little different, I think we were up by three against Houston. I wanted to end it right there,” Chubb said.

Perrion Winfrey returns to practice after being disciplined, says he needed to mature

Stefanski was adamant Monday he didn’t tell Chubb he wanted him to go down after picking up the first down.

“No, I did not,” he said. “I do want to be clear on this one — I absolutely could have told him that in that situation.”

“We all work together. We all communicate,” he said. “But at the end of the day, I’ve been in that situation before and so I really can’t put it on anyone but myself at this point. I think the biggest thing is I was aware of what was going on and I thought the game was over if I’m being honest.”

A major difference from the run vs. the Texans was the amount of space and time Chubb had at his disposal.

“It would have been tough,” he said of throttling down so close to the goal line. “I probably could have got down. I could have went out of bounds, but people were behind and they would have pushed me in or something like that. I probably should have just dropped down after I made the cut.”

After a miscommunication led to the 66-yard touchdown pass from Joe Flacco to Corey Davis with 1:22 left — cornerback Denzel Ward said it wasn’t his fault — the Browns would’ve won the game by recovering the onside kick.

Cooper, a four-time Pro Bowler who had nine catches for 101 yards and a touchdown, was on the second level of the “hands team” and was charged with making a play on the ball while Owusu-Koramoah and rookie receiver David Bell blocked Jets in front of him. Cooper attempted to knock the ball out of bounds, but New York’s Will Parks beat him to it and kept it inbounds, where teammate Justin Hardee recovered.

“Just more aggressive,” Cooper said when asked what he would’ve done differently. “It’s kind of a new way of teams onside kicking the ball to where you don’t really know if it’s going to go 10 yards, it’s moving at an awkward angle, more difficult to locate the ball and make a play on it. Because on one hand you want to get to the ball as fast as possible, but on the other hand you don’t want to misjudge the ball.

“But at the end of the day you’ve gotta make those type of plays.”

He said he wasn’t on the onside kick recovery team last year with the Cowboys but had been in the past and has worked on the Browns’ unit since the offseason. He was asked why it was important for him to acknowledge the error.

“That’s all we can do,” Chubb said. “We can’t point the finger, because we all took a part in it, we all played a role in what happened collectively as a team. Everybody has something to do with it.”