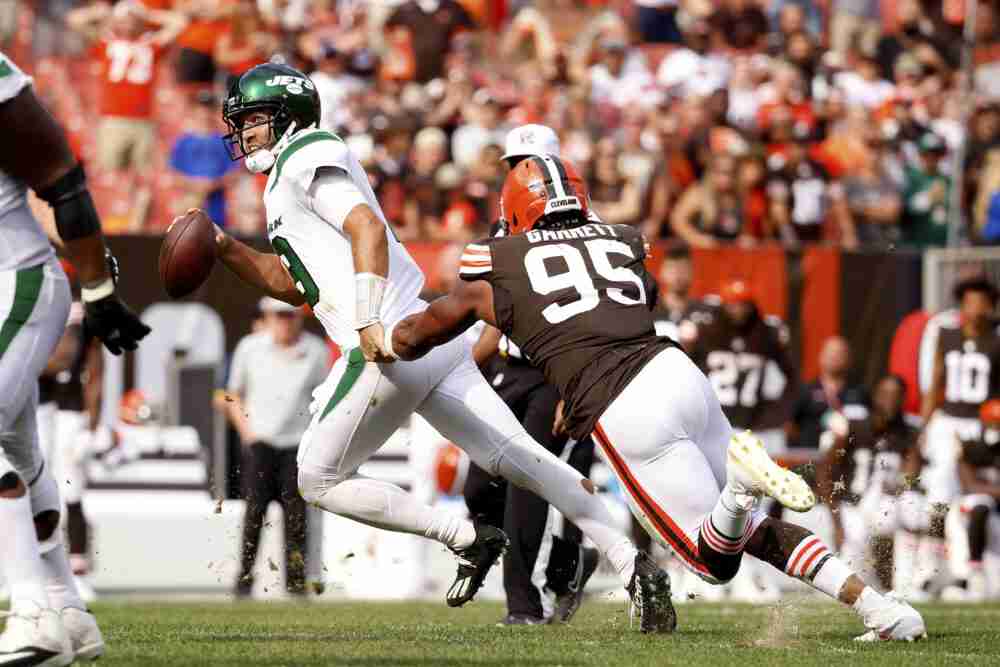 “We’ll see,” coach Kevin Stefanski said when asked if they’d be able to face the Steelers. “These Thursday night games, sometimes it is hard for guys to make it. We will take every hour as they come.”

Defensive end Jadeveon Clowney was ruled out Monday with an ankle injury. He was hurt Sunday in the third quarter of the 31-30 loss to the Jets.


Garrett and Bitonio finished the game, but Bitonio walked out of the locker room with his right arm in a sleeve and carrying a large bag of ice. He rode the stationary bike Tuesday during the early portion of practice open to reporters. Garrett wasn’t on the field.

Rookies Alex Wright and Isaiah Thomas and Isaac Rochell are behind Garrett and Clowney on the depth chart. Wright, a third-round pick, has tipped two passes at the line and made two tackles in two games.

“These are young players who we are asking a lot of them right away,” Stefanski said. “Alex in particular really has responded. He has made plays in these games. He has gotten his hands on balls. He is very active. A young player, he is going to make his mistakes like you would expect, but really think highly of the young man.”

Nick Chubb says he shouldn’t have scored final TD: ‘It cost us the game’

Thomas, a seventh-round pick, made his debut Sunday and didn’t register a stat in nine snaps.

“I.T. has done a nice job for us,” Stefanski said. “I think back to when we got him, we did a lot of work on him the player and the person. He is very squared away, works very hard and diligent about what he does. If there are more opportunities for him, we trust him.”

Chase Winovich, another end, was placed on injured reserve Tuesday with a hamstring injury. He must miss at least four games, and Stefanski said he didn’t know if he’d miss the rest of the season.

Perrion Winfrey returns to practice after being disciplined, says he needed to mature

Stefanski also didn’t know yet if Clowney would have to miss more than one game. His absence will allow the Steelers to focus even more on Garrett if he’s able to play.

“With Jadeveon, he is another guy who teams pay attention to,” Stefanski said. “He is very disruptive. He does a great job in the run game. Very long. Gets great effort sacks and effort pressures.

“We need everybody whenever somebody is out, you just have to step up. Whoever is the next man up, we just need the best version of that person. I am not going to ask them to play like JD, for instance.”

Tight end Jesse James (biceps) was placed on injured reserve. He played in both games after signing Sept. 5. Stefanski didn’t know if he’d be able to return this season.

** Right tackle Jack Conklin (knee) was limited in practice. He’s yet to play this season, and Stefanski said “we will see” regarding Thursday.

** Tackle Chris Hubbard (illness) returned to practice and was limited.

ON THE WAY TO CANTON

Former left tackle Joe Thomas was among nine players in their first year of eligibility on the list of 129 modern-era nominees for the Pro Football Hall of Fame’s Class of 2023.

The list will be reduced to 25 semifinalists in November and 15 finalists in early January. The inductees will be announced Feb. 11, the day before the Super Bowl.

After sharing the field for eight snaps in the opener, running backs Nick Chubb and Kareem Hunt weren’t on the field together against the Jets.

Stefanski has said use of the personnel package will be determined on a week-to-week basis. With Chubb and Hunt alternating, they stayed fresh throughout the game and had a big fourth quarter, combining for 124 yards and two touchdowns.

“I felt good. I think Kareem felt great going to the fourth,” Chubb said. “I think just splitting the carries and the guys upfront being so physical for us and just punishing them on every play till the fourth quarter, it ends up opening up for us every time.”

Linebacker Jeremiah Owusu-Koramoah wasn’t bothered by the boos Sunday after the loss.

“I’m a tough-love type of guy,” he said. “I would say it was a righteous move. In a relationship, you’d probably want your girl to tell you you’re not doing right. We love the fans and the fans still love us.”

“If the Steelers are listening, no, we didn’t call any quarterback runs,” he said with a laugh. “It was just flow of the game.”

He was told he looked faster than in the opener.