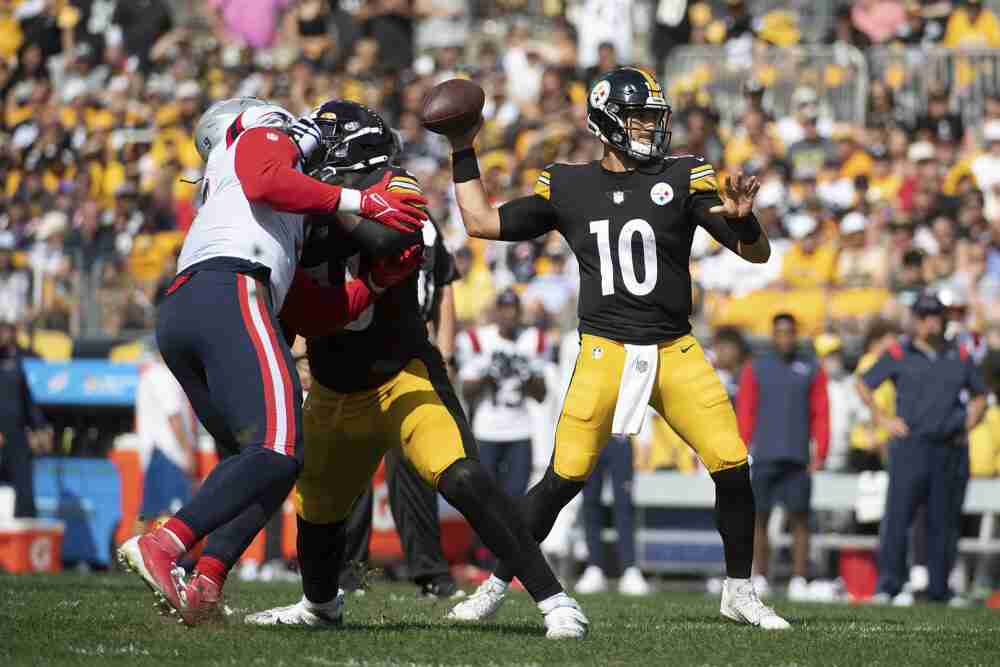 For the first time in nearly 20 years, the Browns are facing a Steelers team without quarterback Ben Roethlisberger. That’s a relief considering Roethlisberger went 25-3-1 in his career against Cleveland.


Taking his place, however temporarily, is Mentor’s Mitchell Trubisky. With rookie first-round pick Kenny Pickett waiting in the wings, the pressure is on Trubisky to win early, and he’ll get the chance to do it in front of family and friends.

The Steelers are 1-1 under Trubisky, who signed as a free agent in the offseason, and his numbers have Steelers fans antsy. He’s completed 59.2 percent for 362 yards, two touchdowns, an interception and a 76.1 passer rating. Despite having a talented trio of receivers in Diontae Johnson, Chase Claypool and rookie George Pickens, Trubisky ranks 32nd of 33 quarterbacks with 5.1 yards per attempt.

“I could take more opportunities down the field and that’s where we can get our playmakers the football,” Trubisky told reporters in Pittsburgh.

Trubisky was the No. 2 pick of the Bears in 2017, so he’s got the physical tools necessary to succeed. His arm’s strong enough and he’s a good athlete who can throw on the move or tuck it and run. Many people around the league have given up on him, but he’s 30-22 as a starter and only 28 years old.

“He is a really good quarterback,” coach Kevin Stefanski said. “I saw him a lot when I was in Minnesota and he was in Chicago. He is very, very athletic. He can really move around. He can make plays with his feet. They have skill players really all over the field outside and inside that can hurt you.”

The stats for the receivers aren’t impressive through two games — Johnson has 13 catches for 112 yards, Claypool eight for 44 and Pickens two for 24 — but Stefanski sees danger everywhere he looks. Especially given the devastating blown coverages from his secondary in the first two games.

Joe Haden to sign 1-day contract, retire as a Brown

The Steelers defense is still solid, but it’s not nearly as scary with All-Pro outside linebacker T.J. Watt on injured reserve with a torn pectoral. He tied an NFL record last year with 22.5 sacks as he was named NFL Defensive Player of the Year for the first time in his five-year career that includes 22 forced fumbles. If his impact weren’t obvious enough, the Steelers are 0-5 when he’s missed a game due to injury.

“He is a great player. Have a ton of respect for him,” Stefanski said.

Watt had a sack, an interception, six tackles, three tackles for loss and two passes defensed before leaving the opening win over the Bengals in the fourth quarter. The last time the Browns saw him, he had four sacks, terrorizing rookie right tackle James Hudson III in a 26-24 Pittsburgh win on a Monday night in January. Hudson started the first two games this season at right tackle and looks much improved, but Jack Conklin is expected to return to the starting lineup for the first time since his patellar tendon tore Nov. 28. Not having to face Watt is a big break, but the Steelers will counter with Alex Highsmith and Malik Reed rushing off the edge and Cameron Heyward inside in their 3-4 scheme.

“Their defense is still playing at a really high level,” All-Pro left guard Joel Bitonio said. “T.J. Watt is obviously a big piece, but they still have some really, really good players on their defense and it will be a big challenge for us.”

In their first game without Watt on Sunday, the Steelers didn’t sack Mac Jones and had only three quarterback hits in a 17-14 home loss to the Patriots. Browns quarterback Jacoby Brissett isn’t taking anything for granted with a Steelers defense that’s historically been among the best at getting after the quarterback.

“They still look good to me,” he said. “I know they wish they had T.J. out there, but I am sure those guys on the other side of the ball are happy that they get to go out there and play some football, play in the National Football League, make plays and make names for themselves. Watching that film, you can see that.”

Minkah Fitzpatrick has taken over for Watt as the most dangerous man on Pittsburgh’s defense. The cornerback-turned-safety has been an All-Pro twice in four seasons and is on the way to a third selection after a fantastic start. He began the season with a 31-yard interception return for a touchdown and added another pick in Week 2 to go along with 20 total tackles. He has one interception in six games against the Browns, a 33-yard pick-six of Baker Mayfield in 2020.

“He’s a helluva player, really the full package in terms of instincts, IQ, ball skills, and he’ll also come up and make plays in the run game as far as tackling,” receiver Amari Cooper said. “He’s their leader back there and everything starts with him. We have to be very aware of where he’s at at all times. And then all of the other guys, they’ve been complementary in making plays, as well, so it’s going to be a great challenge for the receiver room.”

Cooper, who had nine catches for 101 yards and a touchdown Sunday in a loss to the Jets, said the presence of Fitzpatrick affects how he goes about catching the ball.

“Has corner skills where he can match receivers,” Stefanski said. “He has unbelievable ball skills and unbelievable instincts. He is playing safety at as high of a level as anybody in the game.”

Consecutive wins at home for the Browns on Thursday night.

Victories by the Steelers in one-score games since the start of 2020, the most in the NFL. They’re 16-5-1 in those games.

Touches in the NFL without a fumble for Steelers running back Najee Harris, who’s in his second season.

Crumble or bounce back? Cleveland picks the latter. Browns 20, Steelers 17.

Analysis: Browns mismanaged clock, but that doesn’t excuse another blunder by secondary
Commentary: It wasn’t easy, but Browns get win they desperately needed