Joe Haden to sign 1-day contract, retire as a Brown 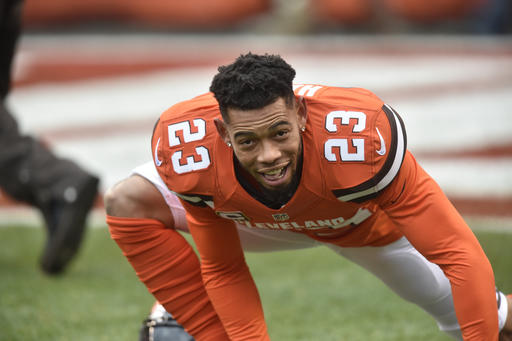 Joe Haden was once known as Mr. Cleveland.

It’s only fitting he’ll retire in his former city.

Haden, a three-time Pro Bowler, intends to sign a one-day contract with the Browns in order to retire as a member of his first NFL franchise, a league source confirmed to The Chronicle-Telegram on Wednesday.


Haden will be honored by the Browns during a game later this season.

Haden, 33, was the No. 7 pick in 2010 out of the University of Florida. He played in Cleveland for seven seasons, appeared in 90 games with 81 starts and totaled 377 tackles, 101 passes defensed, 19 interceptions, four forced fumbles, four fumble recoveries and a touchdown.

He was a man about town, dressed up in Cavaliers and Indians gear to attend their games and was a fan favorite.

The Browns cut him before the 2017 season when he refused to take a pay cut and as part of the rebuild that led to back-to-back 1-15 and 0-16 seasons. He quickly landed in Pittsburgh on a three-year, $27 million contract and had a strong second act to his career.

“I would first like to take the time to thank the browns fans all around the world from the bottom of my heart for making Cleveland a happy home for me for the past 7 years,” Haden posted on Instagram after he was cut. “I want to also thank my coaches, the organization and especially my teammates who have become family. My God doesn’t make mistakes and I know the future is bright!”

His contract expired after last season and he wasn’t signed by anyone.

The timing of the retirement announcement is perfect, as the Browns are set to host the Steelers on Thursday night at FirstEnergy Stadium.

The decision by then-general manager Sashi Brown to cut Haden in 2017 wasn’t a popular one.

“We want to thank Joe for all he has done for this organization both on and off the field,” Brown said in the release announcing the move. “He has been a great teammate and a true asset to the Cleveland community. These are very difficult decisions, we have the utmost respect for Joe and in my eyes, he will always be a Cleveland Brown.”

In 2015, Haden was named Special Olympics’ Global Ambassador, becoming the first professional football player to hold that distinction. Among his charitable contributions in Northeast Ohio, he hosted youth football camps and made sizable donations to the Greater Cleveland Food Bank.