Resilience and chemistry needed to get over loss to Jets, get win vs. Steelers 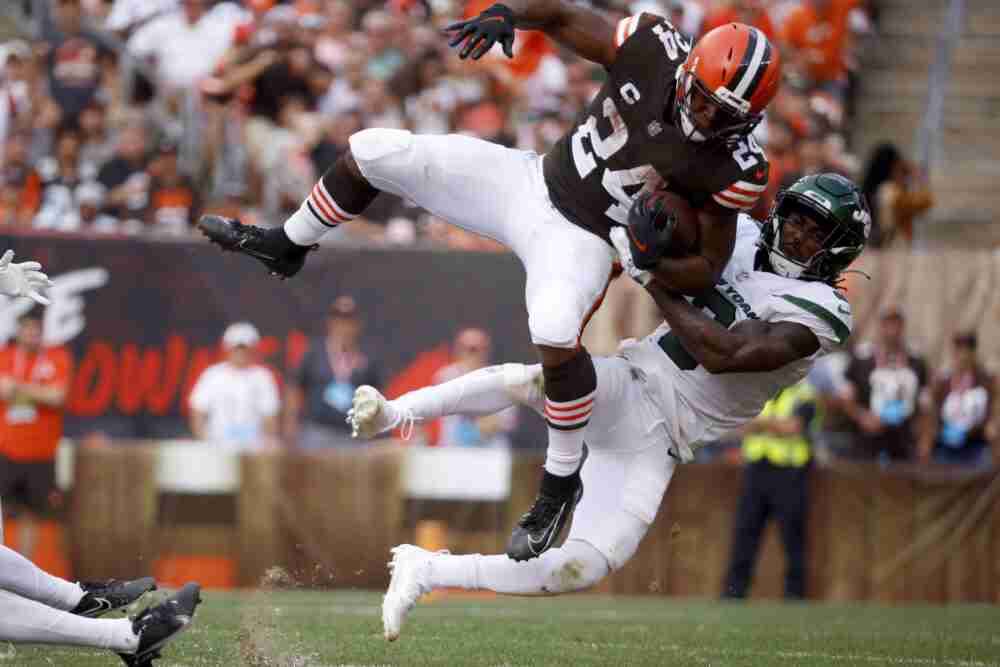 Facing the Steelers is always a measure of toughness and talent. For the Browns, the matchup Thursday night at FirstEnergy Stadium is also a test of resilience, character and chemistry.

The Browns imploded Sunday in the last two minutes of a 31-30 loss to the Jets in the home opener. Poor clock management, special teams mistakes and defensive breakdowns turned a sure win and rare 2-0 start into one of the worst collapses in franchise history. It’s the kind of loss that makes loyal fans boo and everyone question everything.

“Just after that game I really sat on it,” said running back Nick Chubb, whose third touchdown gave the Browns a 30-17 lead with 1:55 left but allowed the Jets the chance at a comeback. “I allowed myself to just feel the pain and all of it that came along with the loss. But gotta move on.”


The keys vs. the Steelers on the field include stopping running back Najee Harris, keeping the ball away from playmaking safety Minkah Fitzpatrick and protecting quarterback Jacoby Brissett. The challenge off the field begins with shaking off the heartbreak and embarrassment. It’s the type of defeat The Cranberries might have been singing about in the 1990s: “Do you have to let it linger?”

The Browns offered an emphatic no, and Brissett said coach Kevin Stefanski set the tone in a speech to the team.

“He was like, ‘Hey, as much as we have an excuse to let it lag, we can’t,’” Brissett said. “I think the guys have accepted that challenge and we have come out focused in these walkthroughs and energy. Looking forward to Thursday.”

Mistakes touched every part of the team in the final two minutes vs. the Jets, but the most worrisome came in the secondary.

The defense has allowed 17 points in the fourth quarter in each of the first two games. The blown coverages keep happening and had the defensive backs yet again looking at each other with confusion and frustration. The most blatant examples were a 75-yard touchdown pass to Carolina’s Robbie Anderson and a 66-yarder to New York’s Corey Davis when the Browns were supposed to be in position to eliminate the quick strike.

The problems were enough to prompt a players-only defensive meeting Tuesday.

“Before the full defensive meeting, we had a players meeting and just talked about things, and I think the best part about it all honestly is people are mad about stuff like that,” cornerback Greg Newsome II said on Stefanski’s radio show on 92.3 The Fan. “There are some teams who are used to that. We’re not used to that and we see all the talent we have in the room, so things like that, it should hurt us and we should be mad about it.”

The Browns entered the season believing they had a defense worthy of consideration as the best in the league, but the fourth-quarter meltdowns and easy touchdowns have made that discussion sound ridiculous.

“I think we’ll get it fixed,” Newsome said. “It’s only Week 2. That’s the good thing about it and the fact that people are that mad this early is honestly a positive sign. It shows that people are bought in and know that we have a really good football team.”

The coaches were on a dual mission in the short week: Get the players to forget about the loss while fixing the problems that caused it.

The big plays can’t happen. And although the Steelers haven’t thrown deep often this year with new quarterback Mitchell Trubisky, it would be misguided for them to not take at least a couple of shots to see if they can catch Cleveland in a miscommunication.

“You do have to fix issues that can be big plays and can go against you,” Stefanski said. “That has been something that we have addressed, will continue to address, will continue to work at practice and those type of things and really make sure that they do not happen again because when they do, as we have talked about ad nauseum, it can hurt you.”

Chemistry is the other part of the equation.

Cornerback Denzel Ward, who let the Jets’ Davis run by him, said he wasn’t at fault. That put the spotlight on safety Grant Delpit.

“I am not going to play the blame game with my teammates, so I am just going to leave it as it was a communication error,” Delpit said.

The Browns must prevent any splintering of the locker room.

“It’s pretty clear how important those things are to clear up communication, clear up that team chemistry that we’ve always been talking about during the offseason to bring it into reality, and that’s something we are doing and we’re working on,” linebacker Jeremiah Owusu-Koramoah said.

“I feel like as a whole we are very close and I don’t believe there is any finger pointing right now,” tight end David Njoku said. “I feel like everyone’s upset, disappointed, embarrassed, sure, but at the end of the day we win, lose, tie as a team.

“That’s one of our biggest standards, that’s what we live by is no matter what, we’re a team and we go through whatever as a team. So it’s very upsetting but the time to think about the Jets has passed, now focused on the Steelers.”

The season always felt fragile given the 11-game suspension for quarterback Deshaun Watson and all the controversy, distractions and emotions that came with his acquisition. The season could begin to shatter if the Browns don’t move past the loss to the Jets and solve the key problems.

As easily as they could be 2-0, they could also be 0-2 after rookie Cade York’s 58-yard field goal saved the day in Carolina after the defense crumbled vs. Baker Mayfield in the 26-24 win. As the Browns try to stay in playoff contention without Watson, they can’t afford to give away any more winnable games.

The Steelers, adjusting to life after quarterback Ben Roethlisberger and playing without reigning NFL Defensive Player of the Year T.J. Watt, who’s on injured reserve, are beatable. They hung on to beat the Bengals in overtime, then lost at home to the Patriots.

The Browns could certainly use an early win inside the AFC North, which is off to a mediocre start — Cleveland, Baltimore and Pittsburgh are 1-1 and Cincinnati’s 0-2 — despite loads of talent.

“They’re already talking about the rivalry between Pittsburgh and the Browns and how historic it is and how crazy it can get, so just looking forward to it,” receiver Amari Cooper said. “You want to make that hay in those division games because those are the game fans really care about. Every game is really important, but those games seem to mean a little bit more so I’m excited.”

The slot in primetime is another reason for the Browns to focus on the task at hand. The prideful players want to put their best foot forward on national television.

“A divisional game on Thursday Night Football, if that does not wake you up, then something is wrong with you,” Brissett said.

The Browns need to put the Jets nightmare behind them.

“We have a 17-game season and one game can matter in the end. But right now we can’t let one turn into two,” Bitonio said. “I think the guys are locked in this week and obviously are competitive dudes and want to improve and try to get a win.”