Notes: Anthony Walker Jr. carted off field with knee injury, will have MRI 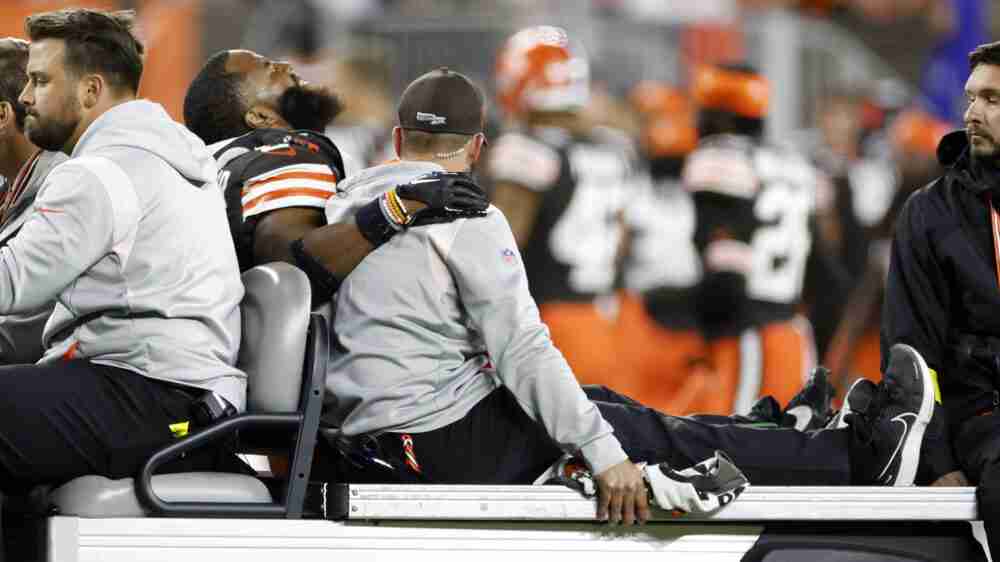 CLEVELAND — Linebacker Anthony Walker Jr. lay face-down on the turf after his left leg bent underneath him while he was blocked by Steelers right tackle Chukwuma Okorafor. An air cast was used to immobilize the leg and he was driven off the field on a cart. The grimace never left his face.

Coach Kevin Stefanski announced Walker has a knee sprain and would undergo an MRI. The Browns are holding out hope it’s not a tear that keeps Walker out for the remainder of the season.

“It is a huge loss with Anthony Walker if this is a longer-term thing because we know what he brings to the football side of things, but he is a captain and he is a leader,” Stefanski said Thursday night after a 29-17 win over the Steelers. “We have our fingers crossed and definitely hoping for the best for No. 5.”


The loss of Walker was felt throughout the locker room.

“It is tough because you know he wanted to be out there. He wants to play,” safety John Johnson III said. “He is our captain, our guy in the middle. An injury like that and having to be carted off, you never know what is really going on. I hope he is OK and can get back ASAP.”

Defensive end Myles Garrett said the defense played for Walker following the third-quarter injury. The Browns allowed only a field goal in the second half.

“A guy like that going down really lights a fire underneath you,” Garrett said. “So seeing him go down in that moment it just really showed us how fragile the game is for any one of us and no rep is really guaranteed. So you’ve got to go out there and give it your all, knowing that he was going to give his all regardless of the circumstances, if he could’ve got up and continued playing. So we were just trying to play for him and continue to.”

The injury happened around the same time that linebacker Jeremiah Owusu-Koramoah (groin) and defensive tackle Taven Bryan (hamstring) exited and didn’t return. Jacob Phillips, who’s part of the rotation at linebacker, took over for Walker in the middle and played the rest of the game. He totaled a team-high seven tackles, a sack and a pass defensed.

“He’s very talented as a player and he’s a specimen physically, able to make plays all across the field,” Garrett said. “And him being able to communicate the defense and being where he’s supposed to be, him working on his coverage drops and being a complete ’backer has really evolved this year and he’s really adapted more to the game and really you’re seeing what he’s been working on in the offseason and what he’s continued to work on each week. So I just love seeing him grow and develop and become this complete ’backer who’s really showing up.”

Jack Conklin’s last game came in primetime. It was only fitting he returned under the lights.

The two-time All-Pro right tackle started for the first time since his patellar tendon tore Nov. 28 in a Sunday night game vs. the Ravens. He had surgery, returned to practice in training camp and was inactive the first two games.

Conklin got a break with Steelers outside linebacker T.J. Watt on injured reserve with a pectoral injury. Watt, the reigning NFL Defensive Player of the Year after tying a league record with 22.5 sacks last year, rushes almost predominantly against the right tackle.

James Hudson III started at right tackle the first two weeks and played well. He served as the backup swing tackle vs. the Steelers, briefly filling in for left tackle Jedrick Wills Jr.

“I appreciate the team letting me get my health back to where I can come out tonight at full strength,” Conklin said. “I felt great and comfortable out there. Could not be happier with how the team played. Great team win.”

Wills left with a knee injury in the second half and went to the locker room but quickly returned.

“I’m good, I’ve just got a little sprain, I’m getting an MRI in the morning but I can walk fine, put pressure on it, I’m good,” he said.

Felton was a healthy scratch. The receiver/running back was shaky in the first two games in the return role, including muffing a punt in the opener.

Rogers entered the league in 2016 and has played with the Colts and Titans.

He entered Thursday with 141 catches for 1,522 yards and six touchdowns in 69 career games, including 24 starts. He had averaged 9.4 yards on 90 punt returns.

Defensive end Jadeveon Clowney was the only big name on the Browns’ list of inactives. He was ruled out Monday with an ankle injury suffered Sunday in the 31-30 loss to the Jets.

Veteran tackle Chris Hubbard was inactive for the third straight game, this time as a healthy scratch. He was still returning from a triceps injury for the opener and missed the Jets game with an illness.

The Browns went with four running backs, as D’Ernest Johnson was active for the first time this year after being a healthy scratch. He joined Nick Chubb, Kareem Hunt and rookie Jerome Ford.

Tight end Miller Forristall was also elevated to the active roster from the practice squad before the game.

Forristall, a first-year player out of Alabama, filled the role of No. 3 tight end. He took over for Jesse James, who was placed on injured reserve Tuesday with a biceps injury suffered against the Jets.

Forristall appeared in two games as a rookie with the Browns last year, spending the majority of the season on the practice squad.

The Browns attracted big names to serve as the Dawg Pound captains in the first two home games.

They destroyed guitars with the opponent’s logo right before the start of the game.

Mitchell was recently acquired in a blockbuster trade.

“Mannn this @Browns traffic is crazy!!” he tweeted 90 minutes before kickoff.

Firelands coach Ryan O’Rourke and player Weston Strader were honored for winning the Browns’ high school game of the week. The program receives a $2,000 grant.

** NBA player and Northeast Ohio native CJ McCollum and former Bengals receiver Chad Johnson were on the field before the game.