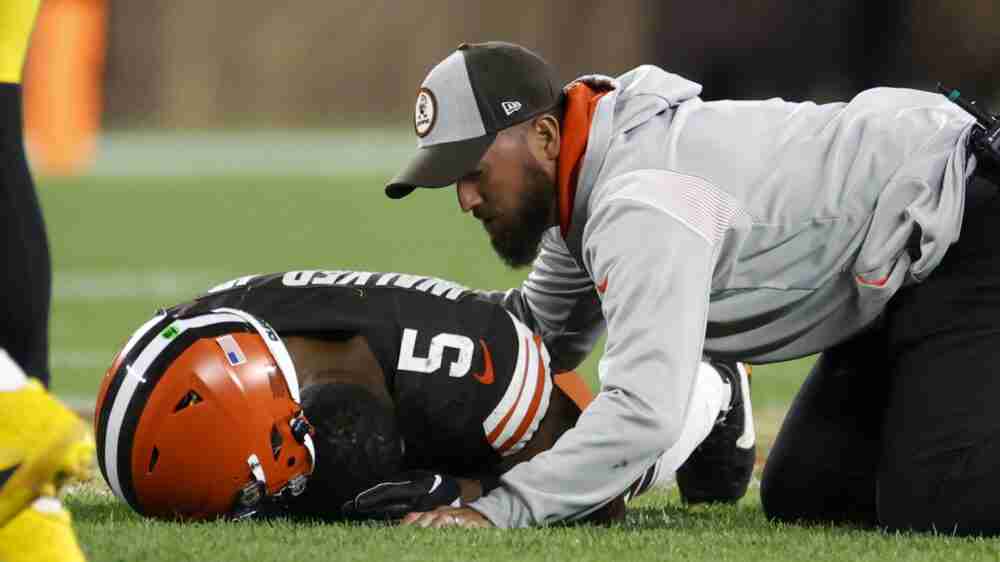 The injury was as bad as it looked.

Linebacker Anthony Walker Jr. will miss the rest of the season after suffering a torn left quadriceps tendon Thursday night in the third quarter of the 29-17 win over the Steelers. He will have surgery and was placed on injured reserve.

“When you see obviously the attention on the field, it obviously didn’t look good,” coach Kevin Stefanski said Friday before the MRI results were revealed. “We are hoping against hope for Anthony. He is a huge, huge, huge part of our football team, what he brings to us on the field and off the field.”


Walker lay face-down on the turf after his left leg bent underneath him while he was blocked by Steelers right tackle Chukwuma Okorafor. An air cast was used to immobilize the leg and he was driven off the field on a cart. The grimace never left his face.

“Appreciate All The Messages & Prayers.” Walker posted on Instagram. “Attacking This Thing Head On & Will Be Better From It.”

The loss of Walker, a defensive captain and signal caller, was felt throughout the locker room following the game.

“It is tough because you know he wanted to be out there. He wants to play,” safety John Johnson III said. “He is our captain, our guy in the middle.”

Defensive end Myles Garrett said the defense played for Walker following the injury. The Browns allowed only a field goal in the second half.

“A guy like that going down really lights a fire underneath you,” Garrett said. “So seeing him go down in that moment it just really showed us how fragile the game is for any one of us and no rep is really guaranteed. So you’ve got to go out there and give it your all, knowing that he was going to give his all regardless of the circumstances, if he could’ve got up and continued playing. So we were just trying to play for him and continue to.”

The injury happened around the same time that linebacker Jeremiah Owusu-Koramoah (groin) and defensive tackle Taven Bryan (hamstring) exited and didn’t return. Jacob Phillips, who’s part of the rotation at linebacker, took over for Walker in the middle and played the rest of the game. He totaled a team-high seven tackles, a sack and a pass defensed.

“He’s very talented as a player and he’s a specimen physically, able to make plays all across the field,” Garrett said. “And him being able to communicate the defense and being where he’s supposed to be, him working on his coverage drops and being a complete ’backer has really evolved this year and he’s really adapted more to the game and really you’re seeing what he’s been working on in the offseason and what he’s continued to work on each week. So I just love seeing him grow and develop and become this complete ’backer who’s really showing up.”

Stefanski also praised Phillips, a third-round pick in 2020 who will become the signal caller without Walker.

“I thought he was outstanding,” Stefanski said. “He does a nice job of communicating. The two plays he made late in the game with the blitz and the sack and then the PBU were outstanding.

“I was proud of Jacob because you wish you could put 12 guys out there for the defense. We listed him as a starter with Anthony early because I really think they are both capable of starting. We have a ton of confidence in him. He plays like he plays last night, I think he can really affect the game.”

Walker was off to a strong start with 13 tackles, a league-high-tying four tackles for loss and two passes defensed.

Okorafor jumped on him while he lay prone, drawing criticism on social media. Okorafor wasn’t penalized for that.

“I will let the league handle those things,” Stefanski said.