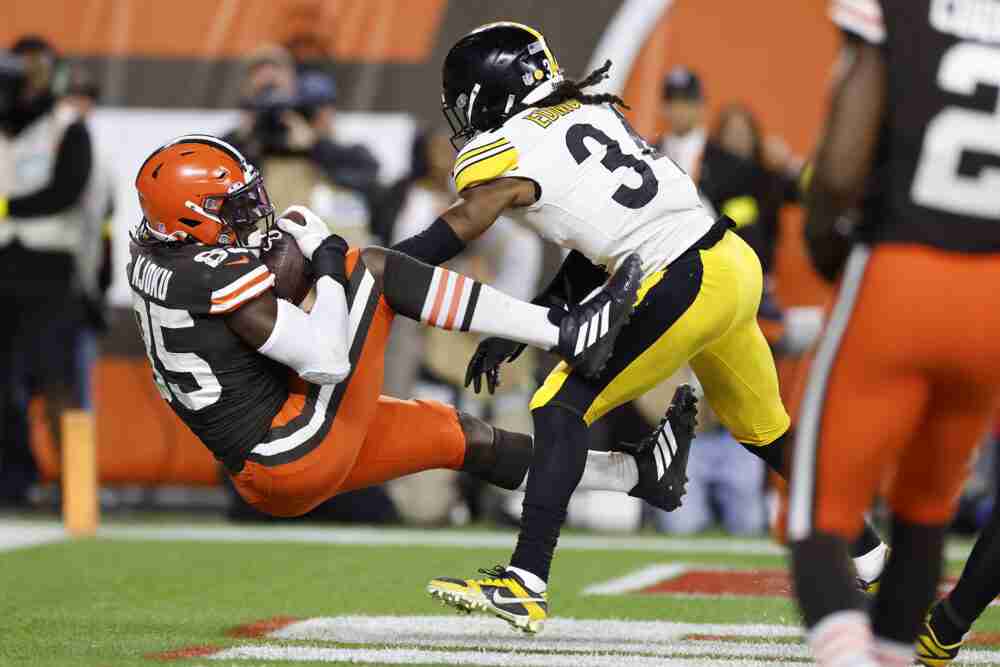 CLEVELAND — The Browns have been waiting for a secondary receiving option to emerge alongside wideout Amari Cooper.

On Thursday night, it was tight end David Njoku.

The sixth-year pro, who signed a four-year, $54.75 million contract extension in the offseason, strung together one of his best games in helping Cleveland to a 29-17 win against AFC North rival Pittsburgh at FirstEnergy Stadium. It was a much-needed bounce-back after a gut-wrenching loss just four days before.


“I love everything that requires being a tight end,” said Njoku, who caught a career-high nine passes for 89 yards and a touchdown while again providing the run game with key blocks. “So whatever the team asks of me, I’ll do it 100 percent. I’m glad we got the win tonight.”

Cleveland rewarded him with a long-term extension that included $22 million guaranteed, made him one of the highest-paid tight ends in the NFL and solidified the team’s commitment to him as its No. 1 tight end.

Njoku had just four catches for 39 yards with no touchdowns on six targets in the first two games, though he played a significant role in blocking for the dynamic running back duo of Nick Chubb and Kareem Hunt.

“There are games where coverage dictates the ball goes elsewhere, and he blocks his rear end off,” coach Kevin Stefanski said. “He needs this weekend to rest because we had him out there. He was blocking at the point of attack, working hard in the run game and making plays in the pass game. He really played hard.”

Njoku did most of his damage in the first half with seven catches for 69 yards and the touchdown. His first catch came on third-and-9, an 8-yard grab that set up Jacoby Brissett’s quarterback sneak. Four plays later, Cooper gave the Browns their first touchdown off a quick slant for 11 yards.

Njoku was just as impactful on the Browns’ second scoring drive, which immediately answered Pittsburgh’s opening touchdown. He hauled in a 12-yard pass on third-and-4, then a 6-yard grab to set up a third-and-short that Hunt easily converted. On the next play, Njoku went up and over safety Terrell Edmunds for the 7-yard touchdown.

While the Browns’ final drive of the half ultimately stalled on downs, Njoku jump-started it with three straight catches — for 6, 19 and 10 yards — showing off nimble footwork to weave his way for extra yardage after the second catch.

His nine receptions are the most by a Browns tight end since Jordan Cameron had nine Dec. 8, 2013. Njoku’s 16 career receiving touchdowns tied Milt Morin for second on the team’s all-time list for tight ends.

“He always tells me he is always open,” Brissett said. “Every time in the huddle, he’s like, ‘I got you. I got you. I got you.’ Another player who maybe in the first game didn’t see the touches or whatever the case may be but made some big catches tonight. I think he did a really good job.

“Nobody really gives him credit for what he does in the run game that opens him up so much in the pass game. I think he is doing a great job. Like I said, he still has so much room to grow.”