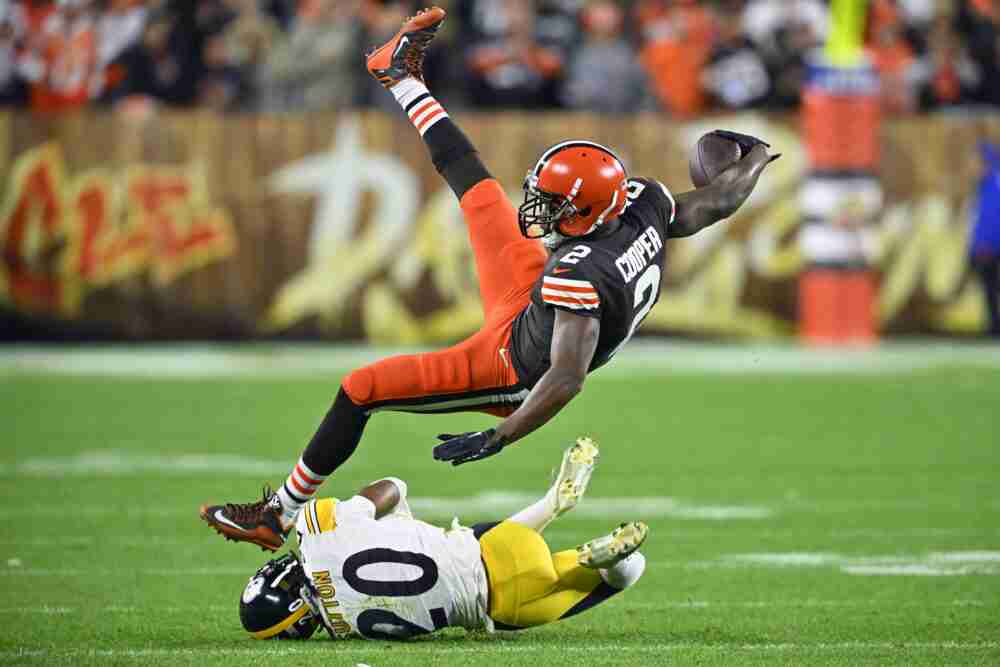 Odell Beckham Jr. didn’t do it. Neither did Jarvis Landry.

Or any other receiver in the last eight years.

“I didn’t know that. I guess that’s cool,” he said after the game of ending the franchise’s drought. “That 100-yard mark is kind of like the standard for a receiver to have a good game in everybody else’s eyes. I just come out here and really do my job. Do what we practice, do what I practice, do what the coaches ask me to do and continue to show that I can just get open and be productive for the team.”

Cooper hadn’t posted consecutive 100-yard games since Weeks 5-6 in 2016 with the Raiders. He leads the Browns with 19 catches and 219 receiving yards.

“I am trying to find new ways to tell you how impressed I am with No. 2,” coach Kevin Stefanski said. “He is really, really smart. He is a great teammate. He runs every route imaginable — slants, go balls, double moves or you name it. I just think he is so versatile.

“He is such a big, physical receiver. Trustworthy. I really enjoy No. 2.”

Cooper and quarterback Jacoby Brissett have developed a chemistry and credit hard work.

“He is a great player, a great teammate, a guy who is going to give you his all,” Brissett said. “You see the things that he is doing obviously in the pass game, but in the run game, he is holding his own. You don’t see that a lot from a lot of No. 1 receivers.

“I am sure he is going to want to continue to get better and better. I am looking forward to just continuing to grow with him.”

Cooper’s night could’ve been even better, but he dropped two passes and inadvertently stepped out of bounds to negate a long catch-and-run.

“I know better than that,” he said. “I guess I was caught up in the moment because I just wanted the ball now. On those kind of scramble drill plays when the defense doesn’t plaster, you only have a small amount of time to get the ball and run it. I saw the corner coming closer and closer to me, so I was just trying to get farther and farther away from him. I should have been more aware, for sure.”

Jack Conklin’s last game came in primetime. It was only fitting he returned under the lights.

The two-time All-Pro right tackle started for the first time since his patellar tendon tore Nov. 28 in a Sunday night game vs. the Ravens. He had surgery, returned to practice in training camp and was inactive the first two games.

“I appreciate the team letting me get my health back to where I can come out tonight at full strength,” Conklin said. “I felt great and comfortable out there. Could not be happier with how the team played. Great team win.”

Stefanski liked what he saw.

“I thought Jack was really good,” he said. “It was great to see him back out there. He battled, was physical, good in the run game and good in the pass game.”

Left guard Joel Bitonio played all 72 offensive snaps after not practicing Tuesday with a biceps injury. He hasn’t missed a regular-season snap since the start of the 2017 season.

“For him to make it to the game in the first place is a big deal,” Stefanski said. “He is a warrior. I thought he played physical.”

Wills left with a knee injury in the second half and went to the locker room but quickly returned.

“I’m good, I’ve just got a little sprain, I’m getting an MRI in the morning but I can walk fine, put pressure on it, I’m good,” he said after the game.

James Hudson III, who started at right tackle the first two weeks, filled in for Wills.

** Harrison was injured in pregame and didn’t play, forcing coordinator Joe Woods to use less of the three-safety package.

“We use Ronnie a lot so that was tough when after the inactives are in to have an injury,” Stefanski said. “You have to adjust. That is where I would say credit to the defensive staff for adjusting and credit to the players for adjusting.”

Browns running back Kareem Hunt and Steelers quarterback Mitchell Trubisky swapped jerseys after the game. They’ve known each other for years after growing up in Northeast Ohio. Hunt played at Willoughby South and Trubisky at Mentor.

“I always wish the best for him. He’s a heckuva player and a good friend of mine, too, even though we went to different schools.”

Trubisky enjoyed playing in his hometown under the lights.

“It was cool, really cool,” he said. “It was definitely special coming back home and playing in front of my friends and family. It meant a lot, but we have to come out with a win next time.”

Corey Bojorquez had a punt deflected but also landed two inside the 10-yard line, including one with nine seconds left. He has a gross average of 45.5 yards, a net of 40.0 and six punts inside the 20 in three games.

“He responded,” Stefanski said of the final punt. “First of all, the punt unit to protect knowing they were likely going to come after that thing and hit a beauty there, that was awesome.”

** Rookie Cade York missed an extra point for the second straight game, this one off the right upright. He also made two and a 34-yard field goal.

“He will be just fine,” Stefanski said.

Stefanski is the first Browns coach since 1999 to beat the Steelers three times. He’s 3-3, including the playoffs.

**The Browns used guard Hjalte Froholdt as a fullback on Nick Chubb’s 1-yard touchdown run in the fourth quarter.

“I hope so, man,” Hunt said of seeing more of Froholdt in the backfield. “He looked good in that fullback spot.”