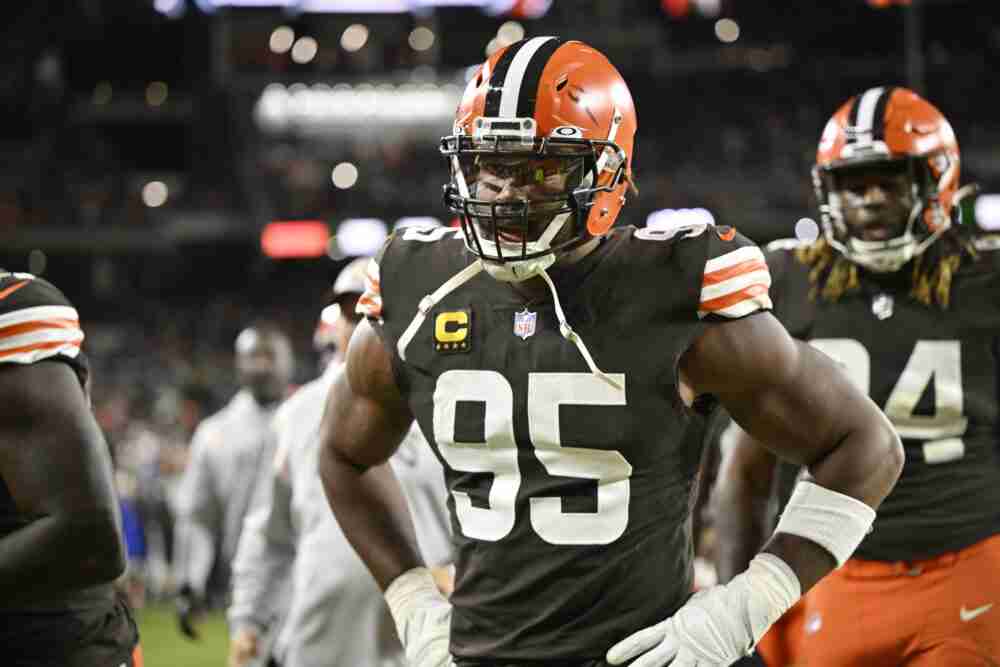 BEREA — While Myles Garrett stayed home Wednesday to rest and recover from injuries suffered Monday afternoon when his Porsche went off the road and rolled over, his coach and teammates expressed relief he was able to walk away from the accident.

“The main thing is that he’s OK and obviously our thoughts are with him,” quarterback Jacoby Brissett said. “Just want him to be healthy.


“I texted him, he’s doing fine. I’m just glad he’s OK. Tough, tough, scary situation. But glad he made it out safe.”

The Browns announced Tuesday night that Garrett, the two-time All-Pro defensive end, had a shoulder sprain, biceps strain, cuts and bruises. Stefanski said “we’ll see” when asked if Garrett would return to practice Thursday and didn’t rule him out for Sunday’s game against the Falcons in Atlanta.

“We’ll do what we always do, which is take in information every single day,” Stefanski said.

Garrett’s teammates spoke Wednesday morning for the first time since the accident on State Road in Sharon Township in Medina County. Garrett and an unidentified female passenger were taken to a hospital with non-life-threatening injuries and released Monday night.

Garrett practiced Monday, and the accident happened after he left the team facility. The luxury sports car flipped several times and was severely damaged.

“It is crazy,” Brissett said of photos of the crumpled car. “When I texted him, I was like, ‘Man, I’m just glad you’re all right.’”

“Something like that happens, it’s just scary for anybody,” safety John Johnson III said. “But I heard he had his seatbelt on. I don’t know if that helped out or not, but that was good.

“I’m just glad he came out of there clean.”

Johnson said he wouldn’t be surprised if Garrett plays vs. the Falcons.

“But if you asked me, I think he just personally should sit it out. But I have no idea,” Johnson said. “Just knowing him, he probably wants to play, I wouldn’t be surprised at all if he did, but that’s a tricky situation. I think he should just take it easy, man.”

“He’s grown. I’m sure he’ll make the right decision for himself,” Brissett said. “In the grand scheme of life the best thing is that he’s OK.”

Stefanski was asked if the trauma of the accident would factor in the decision whether to play Garrett on Sunday.

“You take everything into account,” Stefanski said. “It’s case-by-case basis and really I’ve spoken to him but get to have him in the building tomorrow and talk more in-depth.”

He said he regularly reminds the players to be safe outside the building.

“You should always be careful,” Johnson said. “You can’t let an accident like this happen and all of a sudden flip a switch. So it should be that way every day.

“But it is a point of emphasis like, hey, just be extra careful now. So it can happen to anybody unfortunately. I’m glad he’s all right.”

The Browns (2-1) have already dealt with the acquisition and 11-game suspension of quarterback Deshaun Watson, key injuries and the late collapse Sept. 18 in the loss to the Jets.

“I definitely think we have the right guys in this room to deal with things that happen,” Brissett said. “I think guys understand how fast this league works and the mindset of the next man up.”

“Since I’ve been in Cleveland it’s been about responding,” said Johnson, who signed as a free agent before the 2021 season. “So we’ve done a decent job, you can always do better, but that’s one thing that I can say we’ve had practice at is just blocking out the noise, really locking in and weeks like this, we usually go out there and have a good performance. So hopefully we can continue that trend and it’s going to take everybody.”

Garrett is among the most talented and productive players in the league. He has three sacks in the first three games of the season and 61.5 for his career, which began as the No. 1 overall pick in 2017. He’s a half-sack behind Clay Matthews for the franchise’s official record.

Replacing him if he doesn’t play will take a team effort. Jadeveon Clowney, the other starting defensive end, also didn’t practice Wednesday with an ankle injury after not playing Thursday in the 29-17 win over the Steelers.

Stefanski didn’t rule out Clowney, either, but rookie Alex Wright, a third-round pick, and journeyman Isaac Rochell would get the call if the starters sit. Rookie seventh-round pick Isaiah Thomas and Curtis Weaver from the practice squad are next in line.

“It’s not like you just got thrown into the fire midgame,” Johnson said. “We know what’s in front of us, we’ve got a couple days to prepare, get your mind right, get your body right. So I think they’re ready. But if they aren’t, I think they will be ready.”

Wright started in place of Clowney vs. the Steelers and has played 94 snaps in three games. He has four tackles and two passes defensed.

“We have talked about Alex a bunch,” Stefanski said. “I have been consistent with what I say about him because he has been consistent with what he has done. He has done a nice job when he is in there, going all of the way back to the spring when he got reps as a young player. Everything was new and it continues to be new for young players, but I think he is growing in his role.”

Wright believes he’s up to the task.

Rochell, 27, has played 65 games, including nine starts, since entering the league as a seventh-round draft pick in 2017. He has 95 tackles and 9.5 sacks and signed with the Browns in the offseason.

“He has played a ton of ball,” Stefanski said. “He is a physical football player. Very smart. Happy with Isaac.”

“You’re just glad he’s OK,” Falcons coach Arthur Smith told reporters. “It just brings you back to what’s important in life. I don’t know Myles personally. I have a lot of respect for him.

“I think when you’re planning for a football game you’ve got to plan for everything, but what matters is real life and I’m glad he was able to walk away.”