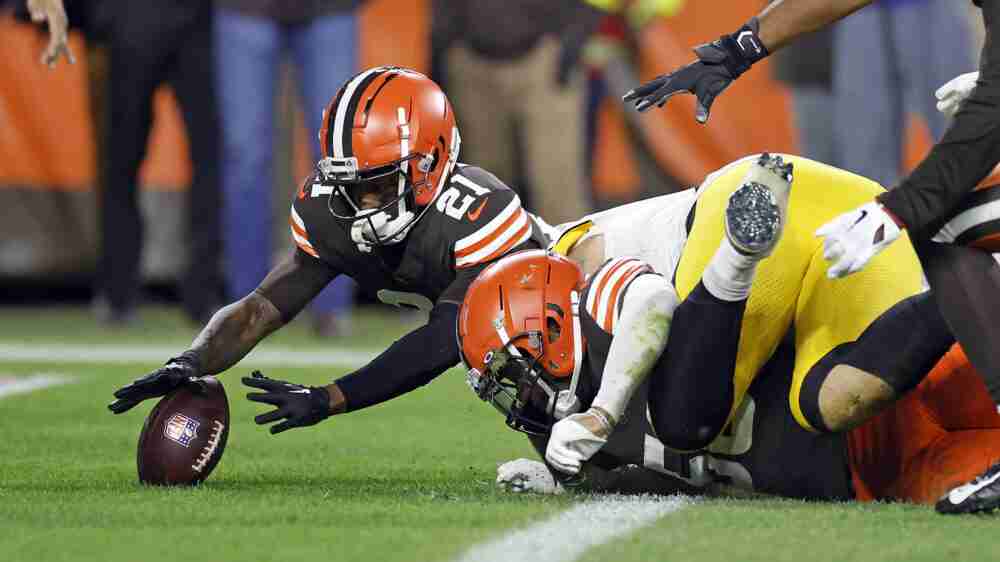 BEREA — The Browns practiced without five defensive starters Wednesday as they prepared to play the Falcons in Atlanta on Sunday.

Defensive end Myles Garrett wasn’t at the team facility following a car accident Monday. He has a shoulder sprain and biceps strain and is expected back in the building Thursday.

Jadeveon Clowney, the other starting defensive end, was out with an ankle injury suffered Sept. 18 against the Jets. He didn’t play Thursday in the win over the Steelers.

Coach Kevin Stefanski didn’t rule out anyone for Sunday.

“I really think it’s take it day by day on all these guys, but JD in particular,” he said of Clowney. “As we get later in the week I’ll have a better feel.”

The defense is also missing starting middle linebacker and captain Anthony Walker Jr., who’s done for the season after a quadriceps tendon tore vs. the Steelers.

“We’ve got a lot of guys out, it’s not like it’s just one or two people, it’s a lot of moving pieces going on right now,” safety John Johnson III said. “So I think everyone on that side of the ball has to lock in on the job, lock in on the game plan and really focus this week and put our best display out there.”

** Left guard Joel Bitonio (biceps) and backup tackle Joe Haeg (concussion) also didn’t practice. Bitonio played through the injury vs. the Steelers and expects to continue to do so.

The Browns have rushed a league-high 114 times and thrown 92 passes (tied for 25th in the NFL) in their 2-1 start. They lead the league with 572 rushing yards while ranking 27th with 564 net passing yards.

“I don’t care. Wins and losses,” said Stefanski, who calls the plays.

“It’s fun,” Brissett said. “It’s early in the season but whatever we’ve got to do to score one more point. Listen, I don’t have an ego to where I want to go out there and try to be somebody that I’m not. I just go out there and try to play good football, play the best of my ability, be a good teammate. All those things come with it.”

Chubb is from Cedartown, Georgia, and played at the University of Georgia. He’ll have family, friends and the team from his high school at the game.

“It will be great. I get a chance to go home and see a lot of familiar faces,” he said of his first NFL game in his home state. “I played in that stadium before, I’m excited about going back.”

He said Cedartown is about an hour northwest of Atlanta.

“It’s a very nice stadium,” he said of Mercedes-Benz Stadium. “Had a lot of wins and losses in there. It will be great to be back.”

Chubb spends a lot of his time running behind Bitonio, an All-Pro.

“Joel’s been incredible,” Chubb said. “I trust when he’s in front of me pulling, I know he’s going to make the right decision, I’m going to make my cut off whatever he decides to happen. Him and Wyatt (Teller, right guard) pulling are both doing a great job.”

The guards must be athletic and smart in the run scheme of Stefanski and line coach Bill Callahan.

“I know what it took for them to pull around, a lot of different looks, they’re not sure what the D is going to give them,” Chubb said. “To make that right decision in a split-second is really impressive.”

Brissett came off the sideline to comfort Walker when he was injured Thursday night against the Steelers and lay face-down on the turf.

“It was very tough for me, obviously for this team, but I have a really good relationship with him, a very good friend of mine to the point where we’re like related, damn near,” Brissett said. “So it’s sad, that was one of the first times in the game where I really jolted up because I got scared because I saw it and I’ve never seen him do that.

“He’s doing fine, so looking forward to seeing him again.”