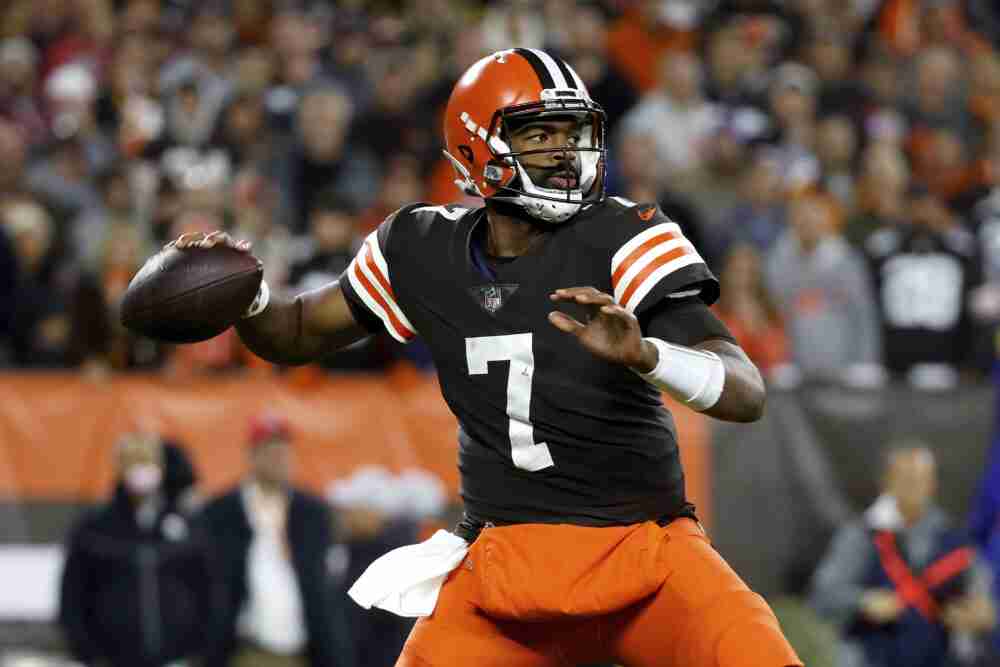 BEREA — Jacoby Brissett barely completely 50 percent of his passes in his Browns debut, a win over Carolina. He’s been on target since, raising his completion percentage into the top 10 among NFL quarterbacks.

After going 18-for-34 (53 percent) against the Panthers, Brissett has completed 43 of 58 passes (74 percent) in the next two games to lift his season total to 66.3 percent, which ranks ninth in the league. He’s ahead of Justin Herbert, Tom Brady and Joe Burrow.

“Decision-making is a big part of that and not trying to do too much,” coordinator Alex Van Pelt said Thursday. “We have always talked about take what it is given. The defense will dictate where the ball goes. Don’t try to do more than that. He has really bought into that and is doing a great job of getting the ball to the checkdowns and then he sees it clearly when it is time to push the ball down the field. That is just a tribute to him and his decision-making.”

Teammates thrilled to see Myles Garrett back in building; he doesn’t practice but isn’t ruled out for Sunday


Brissett, 29, is a 60.6 percent passer for his career but has quickly found comfort in the system of coach Kevin Stefanski and Van Pelt.

“Scheme, players, play calls — it is a little bit of everything,” Van Pelt said. “I just feel really good about where he is right now in our system, his understanding of what is required from the quarterback position. He is playing at a high level.”

Brissett, who’s supported by the league’s top-ranked run game, has thrown for 596 yards, four touchdowns, an interception and a 94.3 passer rating while being sacked four times. After the shaky opener, he’s thrown with power to go along with the precision.

“I think that is definitely a confidence thing,” Van Pelt said. “When you are throwing it accurately and really well, you are feeling really good about your reads and the plays that are being called.”

No. 1 wideout Amari Cooper has been on the receiving end of 16 of the completions the last two weeks, totaling 202 yards and two touchdowns.

“He’s a good leader and he takes command of the offense, he prepares well, he communicates extremely well throughout the course of the week,” Cooper said of Brissett.

** Cornerback Denzel Ward (ribs, back), linebacker Jeremiah Owusu-Koramoah (groin), left guard Joel Bitonio (biceps) and Cooper (rest) returned after not practicing Wednesday. Cooper was a full participant while the others were limited.

“We will see where he is, but I definitely feel like there is a good chance that he will play,” defensive coordinator Joe Woods said of Ward.

** For the Falcons, running back/returner Cordarrelle Patterson (rest/knee) didn’t practice for the second straight day. He’s the only player on their injury list.

IN THE RIGHT SPOT

Patterson began his career in 2013 with the Vikings as a receiver and returner. The first-round pick has become a starting running back who ranks third in the NFL with 302 rushing yards, 39 behind leader Nick Chubb of the Browns.

Cooper played with Patterson in 2017 with the Raiders and knew he could be a full-time ball carrier despite having only 13 rushes that year.

“When he gets the ball in his hands, he’s going to make plays. Obviously when you’re at running back, you’re not getting the ball no quicker than that. He’s an exciting player to watch.”

AT THE WRONG TIME

Cooper, a four-time Pro Bowl receiver, never got the chance to play running back. It wasn’t his choice.

“I think he just pushed it right. He will be fine,” Priefer said. “He is a really prideful young man and he understands his craft greatly. He is so smart, but he is very confident. I have a lot of confidence in Cade. He is a really good kicker.”

** Priefer would like to see veteran Chester Rogers continue to return punts after being elevated from the practice squad to replace Demetric Felton in that role vs. the Steelers.

“I really like Chester,” Priefer said. “When a young man is on the practice squad, you are hoping to get him up every week, and hopefully we will get him on the 53 (-man roster) at some point.”

** Priefer said rookie Jerome Ford was hard on himself after changing his mind, bringing a kickoff out of the end zone and getting tackled at the 12-yard line against Pittsburgh.

“He just made a poor decision, but he will be fine,” Priefer said. “It means so much to him — we win by 12 points, and he is so distraught in the locker room after the game, and D’Ernest Johnson and I are giving him a pep talk.”