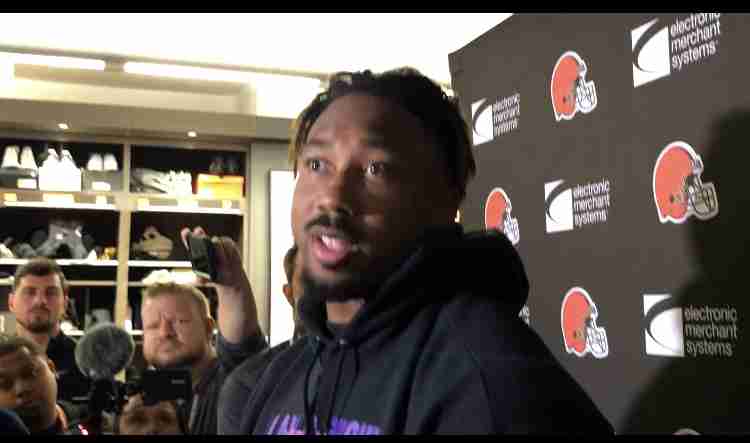 BEREA — The impact of the car crash was obvious as Myles Garrett stood in front of the cameras.

The popped blood vessel that turned the corner of his left eye bright red was the most jarring evidence, joined by a bruise on the forehead and cut above the left cheek. He spoke in hushed tones, barely audible a few feet away in a noisy locker room. The words conveyed the gravity of the situation.

“Definitely grateful to be here with what I saw, the pictures, I think it was a hell of an event and just grateful that not only am I alive, I was able to have so much of my family and the support system that was around me and just keep me locked in and keep me focused on taking it day-by-day,” the All-Pro defensive end said Friday in his first interview since the accident Monday afternoon.

Teammates thrilled to see Myles Garrett back in building


Garrett said the accident was a “blur” and he doesn’t remember much. He’s seen photos of the crash scene and his mangled gray 2021 Porsche 911 Turbo, which went off State Road in Sharon Township, hit a fire hydrant and rolled several times.

He and his passenger, a 23-year-old woman, suffered only minor injuries and were released from the hospital Monday night.

“I’m glad that everything worked out in a positive light,” Garrett said. “We’re both healthy, both walking around. Just blessed with another day.”

Garrett didn’t practice Wednesday, Thursday or Friday after sustaining a left shoulder sprain and right biceps strain during the accident. He saw an eye doctor and said his vision is fine.

He was listed as questionable to play Sunday vs. the Falcons in Atlanta. He said he’d love to play but the medical staff and coaches will make the gametime decision.

“It’s kind of gone up and down,” he said of his health. “This morning I woke up sore, yesterday I woke up pretty fresh and right now I feel pretty loose. The treatment’s been going very well for me, I’ve been doing stuff at home and here at the facility. It’s gone up and down but I feel a lot better than I have.”

Garrett, 26, opened the interview by thanking the Ohio Highway Patrol, the Medina County Sheriff’s Office and the first responders. He said the accident will change his behavior behind the wheel. He has a history of speeding, including getting stopped on back-to-back days in September 2021 for going more than 100 mph.

“I think this will be definitely a wake-up call for me, just try to be smart overall with driving,” he said. “Don’t take for granted. Be grateful that I’m still able to be here and just take my time.”

Garrett rested at home Wednesday before returning to the team facility Thursday. He didn’t address the team but “hugged everybody” and shared his teammates’ excitement for the reunion after a difficult few days.

Garrett’s dealt with the trauma on a pair of fronts.

“I think emotionally I’m pretty grounded with everything, I’ve put it behind me,” he said. “Physically I’m still dealing with some of the injuries that came along with it.

“But it’s really just a blur, it all happened pretty fast. The last couple nights I’ve sat and thought about some of the different situations, scenarios, how it played out, but knowing that I can’t change the past, just got to keep moving forward and glad everyone’s all right.”

He was especially relieved his passenger was fine.

“That was a big sigh of relief for me because I was the one who put us in danger,” he said. “So it was very calming for me to know that they were OK.”

Garrett was cited for losing control of the car, and the Ohio Highway Patrol characterized Garrett’s speed as unsafe and likely a contributing factor, according to a news release. Garrett told the patrolman he thought he was going 65 mph in the 45 mph zone, according to the crash report and body cam footage. He said Friday he thought he saw an animal, which caused him to swerve initially.

Garrett has a history of speeding in Medina County.

In traffic cases from Sept. 24 and 25 last year, he pleaded guilty to going 120 mph in the first incident and guilty to an amended speed of 99 mph in the second, both in zones where the speed limit was 70 mph. He paid $267 and $287 in fines and court costs, according to the Medina Municipal Court website. The tickets were issued by the Ohio State Patrol.

Police and court records reviewed Wednesday by wkyc.com uncovered four other tickets since he was drafted No. 1 overall by the Browns in 2017.

“I don’t think it takes something as drastic as this to tell me that I need to slow down,” Garrett said. “It’s about listening to my loved ones, hearing them out and understanding that it is serious every time you get into the car. No matter how fast you’re going over the speed limit, there’s a real-life situation and circumstances you put yourself in where you’re not only endangering yourself but someone else, so this a definitely a call to me be more safe in my driving and pay attention to my speed and to my surroundings.”

Garrett has a team-high three sacks in three games but was shut out Sept. 22 in the win over the Steelers. He has 61.5 for his career and needs one to pass Clay Matthews for the official franchise record.

Jadeveon Clowney, the other starting defensive end, hasn’t practiced or played since injuring an ankle Sept. 18 against the Jets but was listed as questionable for Sunday. If the Browns don’t have Garrett and Clowney, rookie Alex Wright and Isaac Rochell would be expected to start, with rookie Isaiah Thomas and Curtis Weaver backing them up.

“Want to use the next 24 hours, 48 hours to see how he continues to respond to treatment and those type of things and then make an appropriate decision on him and on the rest of the guys,” coach Kevin Stefanski said of Garrett. “With him and with JD (Clowney), want to make sure that we get all of the information before you make a decision.”

Garrett’s parents have expressed their concern about him playing Sunday, but he’s got a different opinion.

“If it were up to me, I would love to go,” he said. “That’s just my competitive spirit and my nature. Physically we have to assess that going up to the game, today, tomorrow and on Sunday.”

Stefanski said Garrett never sustained a concussion during the accident. The Dolphins said the same about quarterback Tua Tagovailoa after he left and returned to a game Sunday but are under fire after he was concussed Thursday night and left the field on a stretcher.

“I don’t want to comment too much on that situation, which obviously I am glad that he is OK, Tua,” Stefanski said. “Very scary. In this case, it is really just based on whether he is cleared medically, and we take all of those things very seriously.”

“Well, I guess he wasn’t diagnosed with a concussion, either. So it’s kind of a sticky situation,” Garrett said. “It is scary thinking about something like that happening and maybe it’s a possibility for me when I return. But I can’t have that in the back of my mind. Just gotta keep on moving forward as if I’m normal and I do feel normal.”

“I definitely feel like I had a guardian angel,” he said. “It was a very well-built car and I’ll miss it. I loved that car. But I just had a family member recently pass away who I know is watching over me and just joined his wife. I know that they are very happy to see me come out of that car and be able to walk under my own power.”

#Browns Myles Garrett said he had a guardian angel watching over him during car accident. pic.twitter.com/XMa8fOTmVN

Teammates thrilled to see Myles Garrett back in building; he doesn’t practice but isn’t ruled out for Sunday
Falcons 23, Browns 20: Cleveland falls to 2-2 as Atlanta wins battle of rushing attacks