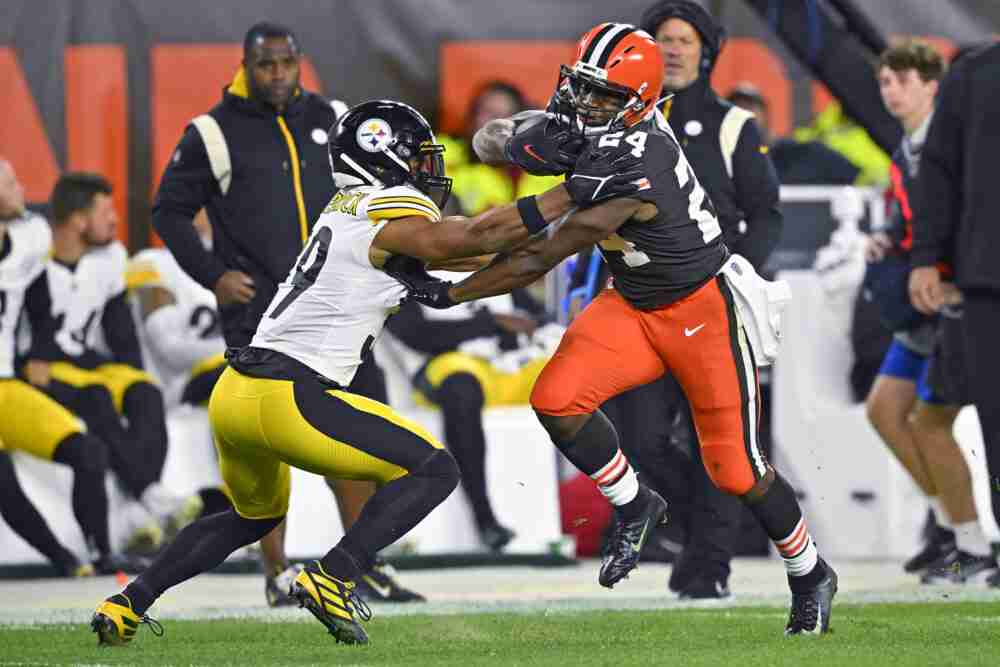 Dean Pees has coached hundreds of games and watched thousands of players in 49 years on the sideline. The Falcons defensive coordinator has never seen a running back tandem as talented as Cleveland’s Nick Chubb and Kareem Hunt.

“Either one of them could be starters on every team probably in the league,” Pees told reporters ahead of the matchup Sunday in Atlanta. “Twenty-four (Chubb) goes out and 27 comes in, there ain’t a whole lot of drop-off. They’re just two great, great, talented backs.

“It’s the best tandem of two backs I think I’ve ever been around, combined, together. These two guys are special.”


The Browns’ running game starts with the combination of the backs and their remarkable gifts and tenacity. But it takes so much more to lead the league with 190.7 yards a game through three weeks.

The Browns have done it with “big dancing bears,” Chubb and Hunt a-leaping and an old-school approach Jim Brown and Leroy Kelly would appreciate.

Guards Joel Bitonio and Wyatt Teller seem to be pulling more than ever this year.

“It is pretty to watch. It is a lot of fun,” Van Pelt said. “Those guys are athletic. For big dancing bears, they can get on the edge or they can push you off the ball.”

Fans are infatuated with videos of Bitonio out in space clearing the way for Chubb or Hunt.

“Joel’s been incredible,” said Chubb, who leads the league with 341 rushing yards. “I trust when he’s in front of me pulling, I know he’s going to make the right decision, I’m going to make my cut off whatever he decides. Him and Wyatt pulling are both doing a great job. To make that right decision in a split-second is really impressive.”

The Browns were clinging to a two-point lead as the third quarter concluded Sept. 22 against the Steelers. Stefanski, who makes the final decision on the play calls, turned to his team’s greatest strength.

On an 11-play, 80-yard drive, the Browns ran 10 times, including Chubb’s 1-yard touchdown on fourth-and-goal. The lone throw came on a third-and-1 to start the drive, and receiver Amari Cooper was wide open for a 32-yard gain. The rest of the possession was brute force against an opponent that’s bullied the Browns for much of the last two-plus decades.

“It’s fun, imposing your will,” left tackle Jedrick Wills Jr. said. “It’s a moment in time when you know you’re kicking the defense’s ass, they can’t do anything about it and it’s the best feeling in football.”

The Browns finished the night with a 29-17 win and 38 rushes for 171 yards and a 4.5 average. They made an impression on the Steelers.

“They did what they wanted to and we could not do anything to stop them,” two-time All-Pro safety Minkah Fitzpatrick said.

A true commitment to the ground game requires handing off when the defense knows a run is coming. The finish against the Steelers was a perfect example.

“The guys were just really coming off of the ball,” Stefanski said. “We talked a lot about the physicality of that game. We knew that was what it was going to be.”

The Browns play old-fashioned AFC North ball, which is foreign to some teams across the league. The Falcons, who play in a dome, have lost eight straight against the AFC North, dating to 2010.

When Pees watches film of Cleveland, he sees a lot of No. 68 Michael Dunn reporting as an eligible receiver. The guard has been used as an extra lineman/third tight end, which sends a message to the defense. So did 6-foot-5, 310-pound guard Hjalte Froholdt lining up as the fullback on Chubb’s fourth-quarter touchdown vs. the Steelers.

Safety John Johnson III has been on the wrong side of rushing attacks that churn out first downs and dominate time of possession and called it “demoralizing.” The Browns have held the ball for an average of 35:36.

RACKING UP THE STATS

The 572 rushing yards are the most for the Browns through three games since 781 in 1958, when Brown and Bobby Mitchell were terrorizing the NFL. Since Stefanski and his staff took over in 2020, the Browns have rushed for 150 yards 19 times, the most in the NFL.

“It is a combination of a couple of things,” Stefanski said. “We have good players. I think we have good scheme.

“We are going to run into some really tough defenses. We get that. We get that it is not going to be clean early at times but just going to keep plugging away.”

Callahan, who went to the Super Bowl as the head coach of the Raiders, brought an expertise and a variety to the run game that are unusual.

“We’re very multiple,” Bitonio said. “So really we can try and take advantage of what the defense does. Coach Stefanski and Coach Callahan do a great job of putting together a game plan each week and Coach Mitch to really highlight the strengths of our offense and the weaknesses of the defense.”

Callahan provides the energy as well as the blocking schemes.

“Coach Callahan is huge in our running game,” Chubb said. “He comes in fired up every day going over the plan and make sure we execute it well.”

Right tackle Jack Conklin is back after a torn patellar last season, left tackle Jedrick Wills Jr. has stayed healthy and center Ethan Pocic has fit right in after Nick Harris was lost for the season. Pees called Cleveland’s line probably the best in the league and knows his Falcons defense is in for a challenge.

“You gotta geek up to play the run game,” he said.

The combination of Chubb and Hunt and how the Browns use them separately and together is unique. Hunt’s rushed 36 times for 151 yards, a 4.2 average and a touchdown, adding nine catches for 54 yards and a touchdown.

Chubb has adopted some of Hunt’s fly-through-the-air, hurdle-defenders style this season, and Mitchell schedules when Chubb or Hunt will be in the backfield.

“We just kind of stay in that rhythm,” Van Pelt said. “I have been other places where you ride a hot hand. I don’t feel like that is the case here. We have two hot hands when they touch the ball, so feel really good about either back that is in there.”

Chubb has collected the majority of the carries and headlines through three games. After finishing runner-up for the league rushing title in two of the last three years, he’s atop the standings with 341 yards and tied for the lead with four rushing touchdowns. His 5.5 average per carry ranks ninth.

According to Next Gen Stats, the Steelers game was the second time this season Chubb gained 100 yards after contact, and he did so while facing a stacked box on a league-high 61 percent of his snaps. Chubb has moved into fifth place on the franchise’s all-time rushing list with 5,157 yards and sixth place with 40 rushing touchdowns.

“I still get caught up watching some of the runs, and the ability to do it for 60 minutes with him is crazy and you can just see the type of player that he is as the game goes on. He’s just one of those guys that just wears on you,” said quarterback Jacoby Brissett, who’s in his first year with the team. “The things that you hear about him are true. He’s a guy that you want on your team and to look back and see him, it gives you a little comfort.”

Chubb grew up in Cedartown, Georgia, about an hour outside of Atlanta and will be playing in his home state for the first time in the NFL. He doesn’t show much emotion, but this could be an exception.

“I feel like he’s very excited,” Hunt said. “But Nick’s going to be Nick, man, he’s excited to play the game of football at all times.”

Hunt believes Chubb is running better than ever.

“We’ve been watching a lot of film and stuff that we feel like we can get better at and he’s been working on his game and it shows.”