Notes: Greedy Williams designated to return from IR, motivated to prove what he can do after latest injury 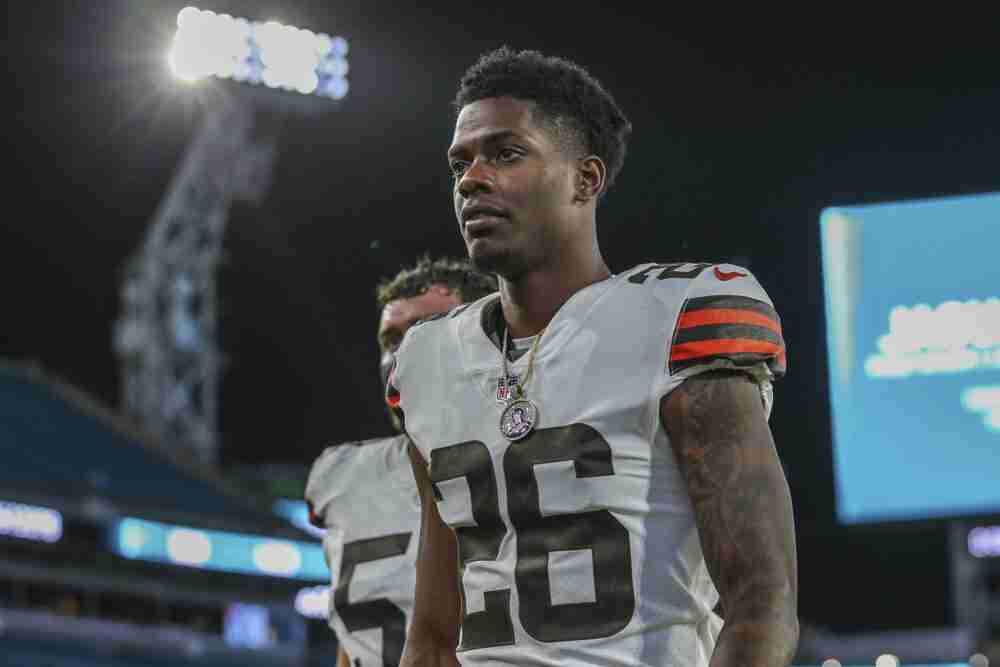 BEREA — The beginning of cornerback Greedy Williams’ career has been filled with starts and stops, including missing the first four games this year with a hamstring injury.

“It’s kinda hard when you’re just sitting down and you’re just thinking, ‘Why does this keep happening to me?’” he said Wednesday. “I just carried the gratitude with it and realized it is what it is. The medical staff, they’re great, so they uplift me, as well.”


He called the latest setback a “freak injury,” with the hamstring overstretching as he tried to make a play in practice.

“I wouldn’t call it a jinx,” he said of his injury history. “I just say it’s another chapter in the book, man, just to come back and be better and prove again what I can do.”

Williams, a second-round pick in 2019, missed four games as a rookie, then all of the 2020 season with a nerve injury in the shoulder. He played 16 of 17 games a year ago.

“Just giving a glimpse of what I did last year, definitely was ready to move forward this year and just go out, don’t think about anything, just play football,’ he said. “It’s my last year, my fourth year, so you’ve got to lock in more. That’s kinda what I’m excited about.”

Williams is in the final year of his rookie deal and feels the urgency.

Rookie Martin Emerson Jr. took his spot as the No. 3 corner behind starters Denzel Ward and Greg Newsome II. Williams is optimistic he can return this week, as the Browns begin a stretch of facing top-tier quarterbacks, starting Sunday with Justin Herbert of the Los Angeles Chargers at FirstEnergy Stadium.

“Yes, it’s highly a chance,” Williams said. “It just depends on how I feel today at practice. I’m going to give it a go. If it feels great, I’m going.

Safety Grant Delpit went to LSU with Williams and was excited to have him back.

“That’s my dude, man,” he said. “I’m happy for him coming off an injury. Nobody wants to be hurt and everybody wants to be on the field, so it’s going to be good for him to be back out there with his brothers and he had a good game against the Chargers last year so hopefully he can pick up where he left off.”

Williams had 10 tackles, a forced fumble and a pass defensed last year in a 47-42 loss to the Chargers.

The Browns scored one touchdown and 10 points in three trips inside the red zone Sunday in the 23-20 loss to Atlanta. The missed opportunities were the difference in the game.

“Once we get down there, our mindset has to change,” said running back Nick Chubb, who rushed for 118 yards, a 6.2 average and a 28-yard touchdown. “We have to get the ball in the end zone. We have to find a way. We didn’t execute very well, as we have been this season.”

Chubb was stopped twice on runs inside the 5-yard line and didn’t complain about not getting the ball more.

“Coach is going to make the calls he feels are best for us at that time,” he said. “No matter whose number is called, we have to get the ball in. We all feel we can get the ball in, so it’s not just the running backs.”

Quarterback Jacoby Brissett said the poor play in the red zone was frustrating.

“When we went back and looked and just our attention to detail and focus in the red zone, that was very uncharacteristic of us, so just honing back in and focusing on our details of each play and we’ll get the results we want,” he said. “I thought we had good plays down there, it’s just about our execution and focusing in on the details.”

GET HIM THE BALL

No. 1 receiver Amari Cooper had one catch for 9 yards vs. the Falcons.

“Amari didn’t get what we say is the correct number of touches,” Brissett said, adding it’s “critical” to get Cooper involved. “We understand that. Teams understand that.

“Obviously didn’t want it to work out that way, but it did and it’s a great learning tool for us at my position and his position and obviously Kev (coach Kevin Stefanski), who’s calling the plays. We understand that is something that we have to do is find ways to get him involved.”

Cooper was coming off two straight games with 101 yards and a touchdown in each. He was targeted four times vs. the Falcons.

“On a couple of them I just missed him, honestly, and I’ve got to do a better job of trusting my eyes, and I think that’s pretty much it,” Brissett said.

Tight end Pharaoh Brown is back with the Browns and back home.

Brown (6-foot-6, 258 pounds) was cut by the Texans on Tuesday, and the Browns pounced. He went to Brush High School in Lyndhurst, was on Cleveland’s practice squad in 2018 and appeared in nine games in 2019, starting six.

In 42 NFL games, including 31 starts, he has 46 catches for 433 yards and two touchdowns. He joins David Njoku, Harrison Bryant and Miller Forristall at tight end.

**Safety Richard LeCounte III was signed to the practice squad.

He was waived Monday, the first time general manager Andrew Berry cut a pick from his first three draft classes. LeCounte has appeared in 10 games, one this season.

Notes: Run defense missed Myles Garrett, Jadeveon Clowney, and Kevin Stefanski says it’s too early to say if they’ll be back vs. Chargers
Notes: Alex Van Pelt on fourth-down decisions — “we live and die by the analytics”