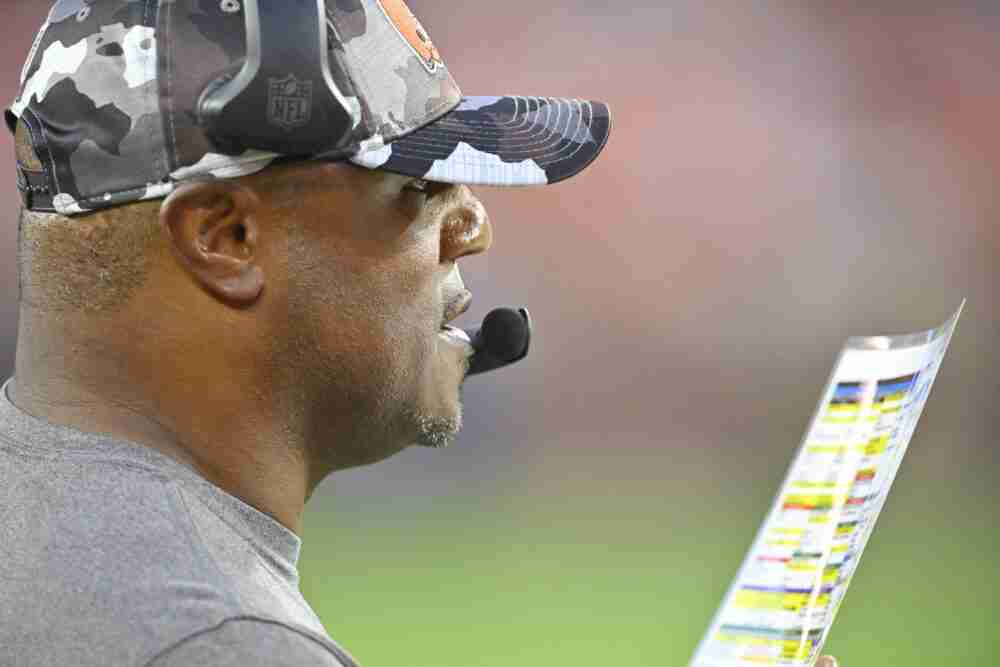 Q: What’s the biggest problem with the defense? Play calls or play execution?

A: This may not be a popular opinion, but I say execution.

I’m not removing all blame from coordinator Joe Woods, because it’s his responsibility to make sure the players know what to do and how to communicate. But I think Woods gets way too much criticism from fans for anything that goes wrong on that side of the ball.

Q:
I believe Kevin Stefanski’s non-reliance on Nick Chubb inside the 10-yard line and at the end of games is his worst failing as head coach and play caller. The man is a legit threat to score from anywhere on the field. What say you?

A: I’d certainly agree Stefanski’s play calling inside the 5 last week cost the Browns the game. And that includes not giving Chubb the ball from the 1-yard line at the end of the first half after he was stopped on first down. The second-down pass play brought a holding penalty, which led to a field goal instead of a touchdown. And no one could argue that Chubb isn’t a threat from anywhere on the field. I think he’s the best pure runner in the league.

Having said all that, I don’t think it’s realistic to say Stefanski should rely solely on Chubb inside the 10. Defenses know he’s the Browns’ best player on offense and act accordingly by paying him extra attention. The game plan should start with Chubb, especially close to the goal line, then adjust accordingly if that’s not working.

Q: How many defensive meltdowns today?

A: Nothing like a little pessimism on a Sunday morning. But I get it. They’ve been the biggest story of the first four games.

I believe the Browns secondary will be on point today, knowing it must be against Chargers quarterback Justin Herbert. But that doesn’t mean the defensive backs won’t have a slip. And I’m confident if they do, Herbert will make them pay.

Q: There is much the Browns do schematically that I like and I have no problem with going for a TD on fourth-and-goal from the 3. What does drive me batty is “schematic tomfoolery.” Passing on second-and-goal from the jumbo package is a very good example, but my favorite took place with 2:28 remaining in the Falcons game. David Njoku lines up as a WR and Jacoby Brissett appears to change protection, signaling to Njoku to return to the line of scrimmage as an extra pass blocker. The play is designed to deceive the Falcons into ignoring Njoku while Ethan Pocic and Jedrick Wills Jr. release to block a planned screen pass to Njoku. It was obvious that extra protection was not needed on the play and the Falcons’ Lorenzo Carter wasn’t fooled. Njoku is covered, so Brissett grounds the ball. A precious play lost. Are NFL defenses catching on that against Kevin Stefanski’s offense, just stick to your basic reads, especially when something seems too good to be true.

A: I have one minor disagreement. I thought the worst call was the end-around to Njoku.

But your points are all legitimate. And I thought the same thing when I rewatched the attempted screen to Njoku. It felt obvious the ball was going to him.

However, I’m not ready to go as far as saying the league has caught on to Stefanski. The opening script against the Falcons was tremendous, and I thought Stefanski did a great job as a play caller the first three games of the year.

A: Yes. Rogers will return punts and likely kickoffs. Demetric Felton Jr. has struggled as the punt returner, and kickoff returner Jerome Ford was placed on injured reserve last week with an ankle injury.

Allen will play a key role on special teams and could be added to the linebacker rotation that’s missing Anthony Walker Jr., who’s done for the season with a torn quadriceps tendon.