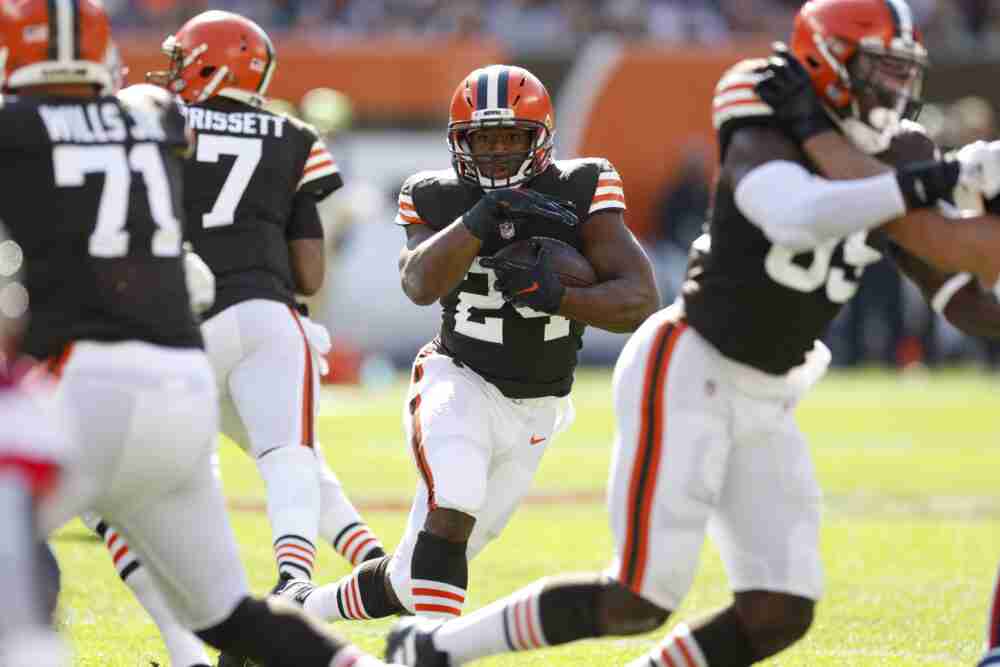 Q: I think it’s obvious to everyone that the Browns’ five best skill players are Nick Chubb, Kareem Hunt, Amari Cooper, Donovan Peoples-Jones and David Njoku. Why are these players not on the field together in the 2-minute offense?

A: If we’re not paying attention to order — and I don’t think you were — I completely agree those are the team’s top five skill players. But not to sound like an apologist for coach Kevin Stefanski, I think it’s unrealistic to expect those five to all be in the two-minute offense.

Lamar Jackson, a ‘top-five athlete, a top-five quarterback,’ will challenge every area of struggling Browns defense


In the rotation used this season, Chubb is the one left out at the end of both halves. I understand how that seems nonsensical when he’s the team’s best offensive player — with the possible exception of Joel Bitonio. But in hurry-up situations where passing is necessary, going with three receivers and one running back makes sense. I’d be stunned if every team in the league didn’t use this personnel package in the two-minute offense. Having two backs in the backfield changes the math of the coverage and limits what the play caller can do.

Where you may have a point — and perhaps this is what you were getting at — is the option of leaving Chubb in the backfield and going with Hunt as a slot receiver. He would replace David Bell or Anthony Schwartz, which seems like an upgrade, even if Hunt isn’t a true wideout. The Browns have gone away from using Chubb and Hunt together since Week 1, as they’ve used more three-tight end packages, and I don’t see Stefanski changing that for the two-minute. This leads us into a discussion about Hunt over Chubb in the two-minute. I see and hear plenty of people complaining about Chubb not being on the field late in games, but that’s not where he excels. Hunt is better catching the ball and in pass protection, and the Browns have used that as a way to manage Chubb’s reps. In fact, D’Ernest Johnson has replaced Hunt in that role ahead of Chubb. I understand the overall philosophy, but when it means 10-20 snaps in a game without Chubb on the field, questions will be asked.

Anthony Schwartz a healthy scratch for today’s game vs. Ravens

Q:
Really? 7 starters returned on defense from last year. How can they not know their assignment?

A: That’s the question of the season. And when coordinator Joe Woods says he’s surprised by the defense’s struggles and lack of cohesion, that’s an alarming, if true, acknowledgement.

I’m not one to blame Woods for all the defense’s failures, but its performance is ultimately his responsibility. And if the same mistakes happen repeatedly, the coaching has failed at some level.

But it’s not all his fault. Players, especially those with experience in the system, have to be trusted to know their assignments and be in the right spots. When Myles Garrett says the problem isn’t effort but guys not being where they’re supposed to be, I feel like that’s a player problem. The coaches have surely told them where to be time and time again, but in the heat of the moment they don’t do it.

Q: Does the NFL have a retroactive IR designation, such as that for which Joe Haeg (concussion) should qualify? Has he not been placed on the IR because clubs are entitled to only eight in-season retrievals and they’re trying to budget them wisely?

Moreover, Haeg is one of 10 or 11 O-linemen being carried each week, while we’re dangerously thin — and paying immensely for it — along the D-line. How is this wise?

A: I don’t believe injured reserve can be retroactive. It’s at least four games missed after the move.

As for Haeg, the limit of eight returns could factor into the decision. If the team expected him to miss less than four games, it may have wanted to save a designation to return. However, when someone suffers two concussion — both in practice — within three weeks, the return to the field is usually delayed, so it seems unrealistic to believe he’d make a quick recovery. I’ve been expecting Haeg to be put on IR, likely for the season, as a way of clearing a roster space. General manager Andrew Berry hasn’t felt the need to do that.

Q: Why has GM Andrew Berry done so little to reinforce this needy roster, especially along the D-line?

In your opinion, can it be reasonably justified that AB insists on carrying non-contributor draftees Anthony Schwartz, Demetric Felton Jr., Tony Fields II and the overmatched tandem of Tommy Togiai and Perrion Winfrey on a club that is supposedly ready to win now so as to avoid wasting prime years of Garrett, Chubb, Denzel Ward, et al?

How can it be that this organization annually has an abundance of available cap space but none of it is ever spent on in-season veteran reinforcements?

A: I felt your question was better served broken in two. Even though I don’t have a great answer for this one.

I know once the season gets going, the list of available difference-makers isn’t long, but that doesn’t mean Berry can’t do more. He did sign veteran tackle Tyeler Davison to the practice squad but he’s yet to be elevated for a game. And not signing someone like Ndamukong Suh does feel like neglecting a viable option.

I don’t have a good answer for keeping the non-contributors, except that the front office believes they’re young and will develop into quality players. I get that to some degree with Schwartz, who has special speed, but not with Felton and Fields.

When it comes to using cap space, I think there is an organizational belief that retaining space and rolling it over is essential. That’s even more true with some of the big contracts paid out recently.

Q: Why did the Browns scheme a long pass to Pharaoh Brown off play-action (that resulted in an interception)? Did analytics reveal that a Bill Belichick team might ignore Brown going long because he’s a journeyman TE, relatively slow with his combine 40-yard dash of 4.83 seconds (at his pro day six years ago), he’s new to our roster and in his 5-year NFL career has never had a reception for longer than 30 yards?

A: I don’t think analytics had anything to do with it. The coaches knew Belichick would focus on stopping the run and tried to take advantage of that early. The choice of Brown as the target was curious, but he was wide open early, so I’d argue the play call worked.

I found it interesting that when I asked players and coaches if Jacoby Brissett’s mistake was not throwing the ball sooner, they said no and that it was just a bad decision to make the throw when he did. Just because Brown was open early, he wasn’t when Brissett went to throw it and the quarterback should’ve realized that and looked somewhere else, especially on the second play of the game. Knowing this, I don’t blame Stefanski for choosing to throw early; he just needs his quarterback to be better.