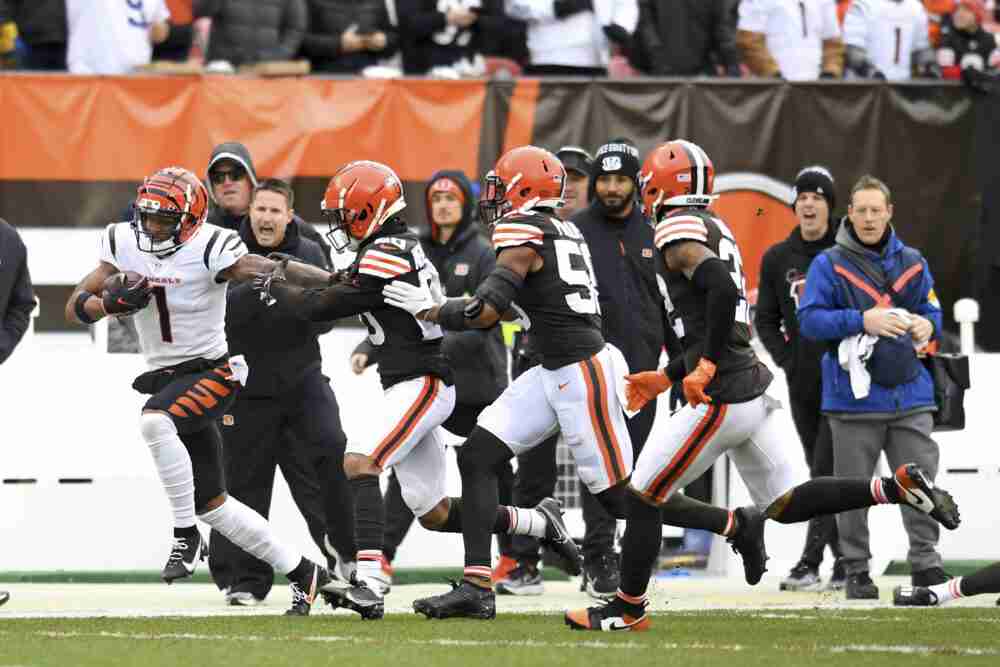 
The Browns won’t have No. 1 tight end David Njoku, who’s out with a high ankle sprain, and No. 3 tight end Pharaoh Brown was listed as questionable after missing two practices following a concussion. For an offense that prefers two- and three-tight end sets, something will have to change.

The Bengals will be without No. 1 receiver Ja’Marr Chase, as a hip injury will sideline one of the league’s best playmakers. Normally Chase is joined by Tee Higgins and Tyler Boyd to form arguably the league’s best group of wideouts — Cincinnati’s the only team with three receivers with 400 yards and each went over 90 yards last week — and the Bengals consistently spread out the defense with three receivers and let Joe Burrow throw the ball around the field. Chase’s absence could force the Bengals to make significant alterations in personnel usage and play calling.

How both offenses adjust in scheme and style will be critical to the outcome and challenge the opposing defense to adapt on the fly.

“For them, it is heavy 11 (three receivers) and it is shotgun, but nothing says that they can’t get under center vs. us,” Browns coach Kevin Stefanski said. “Being prepared for all of the things they can do. Having gone against Burrow and this offense the last few years, I think it is really that game of they can try ‘this’ and we can counter with ‘this.’”

The Bengals will turn to Higgins, Boyd and tight end Hayden Hurst in the passing game. The Browns will miss Njoku in the pass and run games, as he’s finally developed into a consistent threat in both phases. He’s caught 34 passes for 418 yards and a touchdown and helped Nick Chubb lead the league with 740 rushing yards. Harrison Bryant and potentially Brown will split Njoku’s duties and could line up together, but the Browns will likely go with more three-receiver sets or use running backs Chubb and Kareem Hunt together to compensate for not having Njoku against a Bengals defense tied for seventh in scoring (18.9 points).

“We have different ways that we can run our offense, but it is really incumbent upon us as a staff to put together a plan with the guys who are available to you,” Stefanski said.

GET YOUR MOTOR RUNNING

The first challenge for Browns left tackle Jedrick Wills Jr. will be matching the intensity of Bengals pass rusher Trey Hendrickson. Every Browns coach and player asked about Hendrickson mentioned his motor, while Wills has been known to not always play to the whistle. Wills is coming off his worst game of the year in the loss to the Ravens — two penalties, a sack and several pressures allowed — and knows he must raise his level of play to keep up with Hendrickson.

“He’s a really, really good, productive rusher with a high motor,” Wills told The Chronicle-Telegram. “He’s one of those guys that you’ve really got to put a lot of effort on because he’s going to come out and play hard. You’ve got some guys that are really good rushers, get to the edge, but he’s one of those guys that will chase the quarterback all the way down the sideline. So just have to make sure you finish and limit those production plays. Because it’s a momentum-builder for the defense.”

“Obviously he’s extremely athletic and talented but just the effort he plays with,” said tight end Harrison Bryant, who played at Florida Atlantic with Hendrickson. “You have to match it to block him or have a chance to block him. He plays really hard.”

Wills acknowledged his “tough day” against the Ravens but feels good about his season overall and said he had a good week preparing for the Bengals.

“So just correct the bad ones and move on,” he said. “It’s a long season.”

DON’T FORGET ABOUT HIM

The Bengals are built to throw with Burrow already among the best in the game. But with Chase out and rain possible on the lakefront, they could turn to Pro Bowl running back Joe Mixon to carry a larger load. Mixon has two games with at least 24 rushes this season but only 39 total over the last three weeks. For the season, he’s rushed 121 times for 405 yards, a 3.3 average and two touchdowns and caught 27 passes for 182 yards and a touchdown.

“The running back is playing well. He is running with power,” defensive coordinator Joe Woods said. “They have run the ball against us. That is what makes them dangerous. They can attack you in different types of ways. We just have to be ready for anything.”

The Bengals rank 28th in the league with 87.4 rushing yards per game, and the Browns are 24th against the run at 135.6. Mixon’s had success vs. the Browns. The second-round pick in 2017 has played eight games in the Battle of Ohio, rushing for 718 yards, a 4.8 average and six touchdowns, adding 29 catches for 286 yards.

“He’s definitely very underrated,” cornerback Greg Newsome II said. “He’s a great running back. They haven’t been really running the ball too great, but at the end of the day that’s a guy you can’t sleep on because he’s an amazing back. He can have a day any single game.”

The Bengals have gone with more empty sets — nobody in the backfield — the last two games as Burrow has thrown 79 times for 781 yards and six touchdowns. Garrett doesn’t think the Bengals will make major changes, even without Chase.

“They’ve been having so much success in the air the last two games, I think they’ll still rely on that,” Garrett said. “I think it’ll be a little bit more Mixon, but they’ll still go back to their moneymaker.”

Touchdowns allowed by the Bengals defense after halftime this season.

Record vs. the Bengals for Browns coach Kevin Stefanski.

Years since the Browns and Bengals played on Monday night.

Desperate for a victory, the Browns are denied by the dynamic Joe Burrow. Bengals 27, Browns 24.