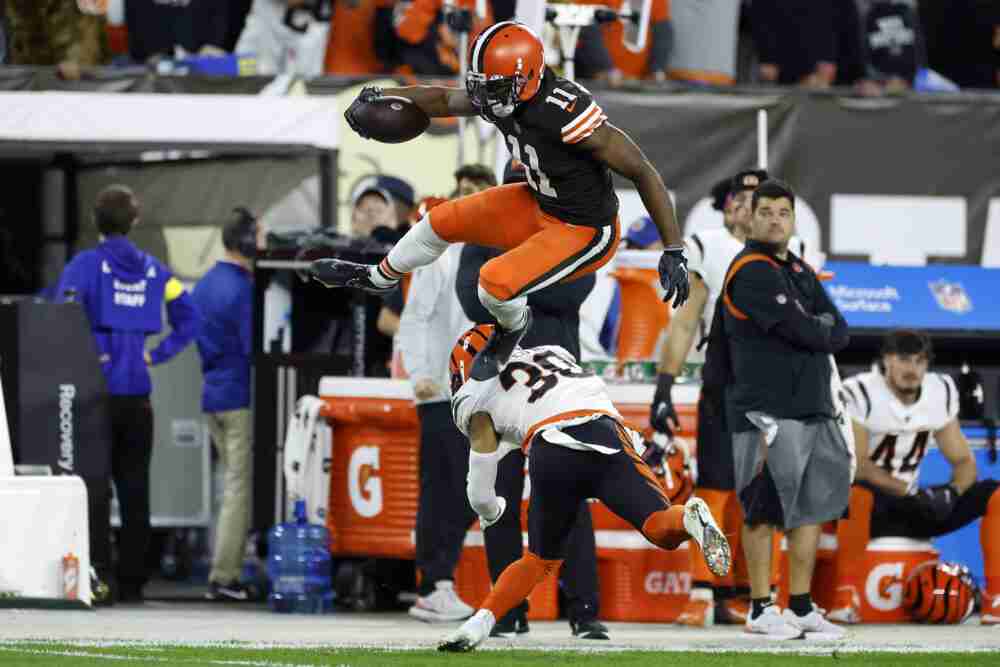 CLEVELAND — Nothing can inspire an underachieving team more than seeing a bye week on the horizon.

Playing like a team that had a severe case of bye week fever, the Browns, who hadn’t won a game in over a month, won a game Monday night.

This ghoulish season finally took a turn for the better for a Browns team desperately in need of tangible evidence that it was not as bad as its 2-5 record suggested.

Winning for the first time since Sept. 22, the Browns took the Cincinnati Bengals to the woodshed in a 32-13 victory that wasn’t as close as the score.

The visitors seemed strangely disinterested through most of the game, perhaps fooled by that 2-5 Browns record. The Bengals came into the game having won four of their last five games, but at no time during this one did they appear to be capable of, much less interested in, winning.

Grateful for such apathy, the Browns jumped on the Bengals early, seemed to enjoy the sensation, then jumped on them late.

This was the game the Browns have been looking to play, that their fans have been hungry to see, since virtually the start of the season. The last four losses in the last four weeks offered no hints that they had in them this type of performance.

But four quarters later, the Browns appear to have gotten their wake-up call, just in time for — well, their timing still leaves something to be desired — their bye week.

The team finally figures out some things, finally plays up to its potential, finally wins a game — and now will go 13 days before playing its next game.

This had to feel like Christmas morning for coach Kevin Stefanski. He emptied his play card, knocked the dust off some gadget plays, and the vast majority of them worked.

This is what the offense was supposed to look like from the start of the season. But something got lost in the translation. Four losses later, here come the Bengals to Cleveland for a primetime, nationally televised game that was either going to further embarrass the Browns with a loss, or relaunch the season with a we’re-not-as-bad-as-our-record victory.

Fortunately for the Browns, it was the latter, and now the remainder of the season doesn’t appear nearly so grim.

The Browns are only three games away from getting a new quarterback, Deshaun Watson. Perhaps you’ve heard of him.

Funny how one victory can change the landscape of a season, the sensibilities of the fan base and the intrigue of the remaining games.

Just when it appeared the Browns were out of bullets for this season. When it looked like they would spin their wheels into oblivion, you look up and at the start of the fourth quarter, on Halloween night, the Browns are winning 25-0.

Where did this come from?

Maybe the Browns reached their embarrassment threshold and decided there was still a season to salvage. Perhaps they got tired of trying to explain why a team with such an impressive roster could have such an unimpressive record.

Whatever it was, wherever it came from, it’s here now. They’ve taken their season off life support.

The invisible paddles of life that were applied to the Browns’ flickering season finally did their job. A season has been revived. Especially if the Browns continue to play with the concentrated abandon with which they dismantled the overmatched Bengals.

For the first time this season the Browns looked like they played angry. Like they knew they were better than 2-5. Now they are.

Ironically, just as the train is finally getting up to speed, the Browns must pull into the station for the mandatory bye week. They won’t play again until Nov. 13 in Miami.

The layoff may be ill-timed, but unavoidable. If nothing else, the Browns will be able to review and admire the machine-like efficiency they used to steamroll Joe Burrow and the Bengals.

The Browns got peak performances from all their key performers. Nick Chubb ran for 101 yards and two touchdowns. Amari Cooper caught five balls for 131 yards and a touchdown, and Jacoby Brissett, in his best game of the year, maybe the best game of his career, was sensational, completing 17 of 22 passes for 278 yards, one touchdown and a passer rating of 133.

The defense was mean and stingy. Indeed, it was one of those rare complete games when everything worked, everyone did their job, and the result was a total mismatch with the defending AFC champions.

Beating the Bengals soundly, and convincingly, is the perfect springboard from which to come bounding out of the bye week.

In a Halloween performance that nobody saw coming, the Browns looked scary good.

And a season has been revived.

Browns-Bengals Preview: 3 things to watch, 3 key numbers, the prediction
Browns at the bye: Dissecting a frustrating first half of the season