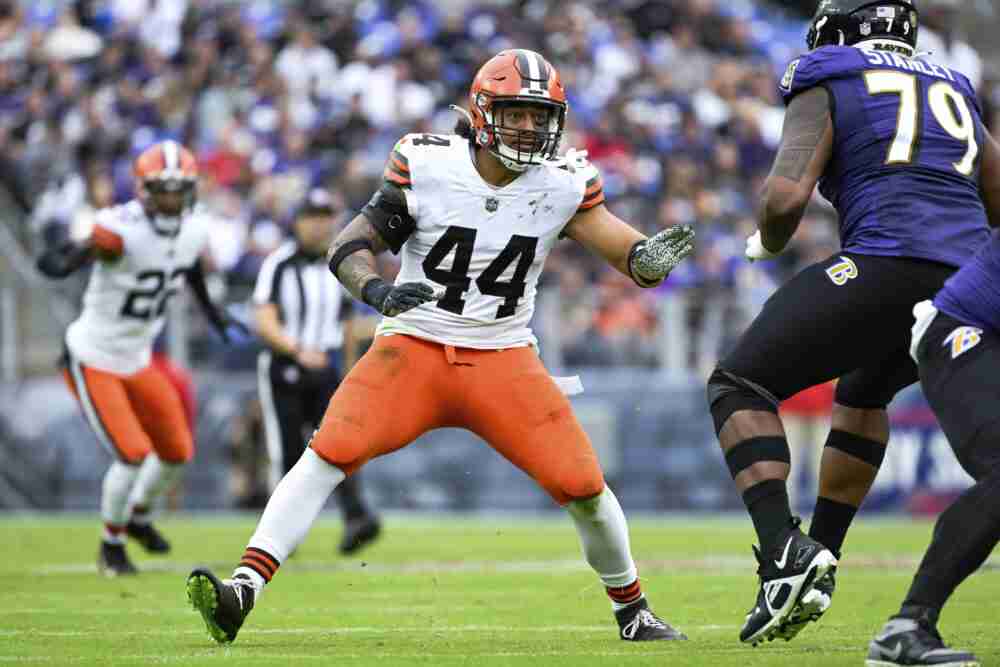 Sione Takitaki had earned a starting job as the muscle. The strongside linebacker could set an edge, fill a hole, take on a blocker and rush the passer.

But when it came time to run, cover and play in space in the nickel package, Takitaki found himself on the sideline.

With injuries attacking the linebacking corps this season, Takitaki has been asked to expand his role. Getting his most playing time in more than two years Monday night, he played perhaps the best game of his four-year career as the Browns broke a four-game losing streak with a 32-13 win over the Bengals.


Takitaki had a game-high 13 tackles, one for loss, and a strip-sack.

“Takitaki was unbelievable,” coach Kevin Stefanski said. “He was all over the field making tackles.”

So Takitaki, a third-round pick out of BYU in 2019, joined the recently acquired Deion Jones in the base and nickel packages. Takitaki played 45 of 53 (85 percent) defensive snaps, his highest percentage since the 2020 opener at Baltimore.

“Man, I’ve been waiting to play this whole time, one of those guys was healthy,” he said. “I’m ready when my number’s called. I’m grateful for the opportunities.

“Obviously I don’t want to see my guys go down. But definitely grateful to be out there on the field, showcase what I’ve got and help out my team in any way possible. When opportunities come, you want to take advantage. It was fun to be out there with the guys.”

Jacoby Brissett gets redemption, TD after INT vs. Chargers that was ‘sitting on my heart’

Willing to play wherever the team needs him, he’s taken advantage of the increase in snaps. Against the Bengals he set a career high in tackles for the second straight week, flying past the eight he had in the loss at Baltimore.

“He has done a really nice job,” Stefanski said. “In the past, he has been our base linebacker and then not in there in some of the sub packages, but he is always ready to go the moment we would need him.

“It is an increased role, and he is doing his job, I think that is where it always starts. He is doing his job, he is where he is supposed to be and then he is tackling well. There were a bunch of moments where they were checking the ball down to their running backs, and he was right in position and got them on the ground. I did think that was probably our best tackling game of the season, and Sione played a huge role in that.”

The defense had a variety of issues in the first half of the season, with tackling among the largest. It was especially problematic in the losses to the Falcons and Chargers, when the Browns allowed a combined 440 rushing yards.

The Browns have been better the last three games, particularly against the Bengals, with Takitaki repeatedly taking down running back Joe Mixon in the open field.

“I feel like we tackled well, knowing that this team likes to work out in space,” he said. “I feel like we did a great job during practice emphasizing tackling. I feel like it showed out there on Monday.”

Takitaki’s most impactful play didn’t involve a tackle. He timed his blitz, got past Mixon and knocked the ball out of quarterback Joe Burrow’s hand as he stepped up in the pocket. Defensive tackle Tommy Togiai recovered.

“We kind of showed our shell look like we’re showing a lot of our other coverages and Burrow looks like, ‘oh, it’s the same coverage,’” Takitaki said. “And then, boom, hit the A gap. I felt like Mixon came up, tried to block, I worked his outside. We work run, run, reach all the time for a QB stepping up in the pocket and having that ball real low. And so it was just translated on the field, run, run, reach, and it was my time to get a little strip-sack. It was awesome.”

He credited coordinator Joe Woods for mixing the pass rushes and coverages and believes the performances of the last two weeks were vindication for Woods, who was loudly criticized earlier in the season.

“Heck, yeah, we had a great game plan the last two weeks, and especially this last week that Coach Woods and the defensive staff put together for us,” Takitaki said. “We knew that this team likes to throw, so I felt like we were mixing it up and showing a lot of different little blurry looks for Burrow. And I feel like we got them on their heels early from all the great game plan that we had, the plays that Coach Woods was calling. So once we got them on their heels, it was hard for them to recover.”

He’s in the last year of his rookie contract, so his future with the team is uncertain. If he keeps playing well in a variety of roles, he could get an extension. He’s started 23 of 53 games with 169 tackles, 10 for loss, two sacks, an interception returned for a touchdown, two forced fumbles, a fumble recovery and a pass defensed.

He agreed with linebackers coach Jason Tarver that the game has slowed down for him.

“I feel like when Coach Tarver and them got here — that was my first year actually really playing — I was young in my game and had some struggles,” Takitaki said. “Year 4, I know I am a vet and a lot of stuff that I have seen, so maybe see the game a little slower and going out there and just playing and not thinking too much.”