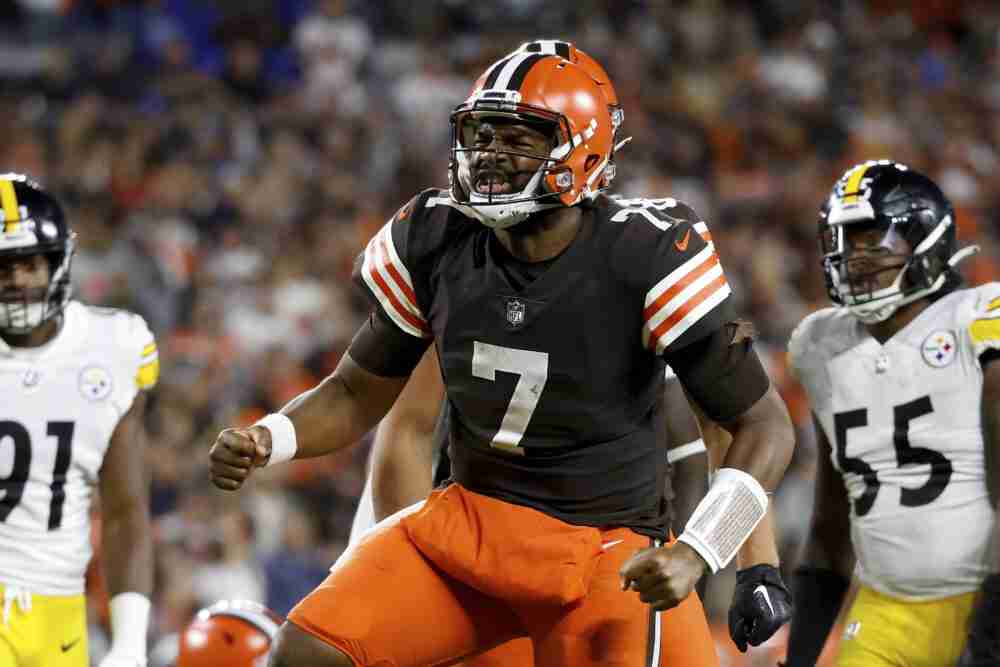 Q: Will the @Browns look to re-sign Jacoby Brissett?

A: I think so. He’s played better than anticipated — at least in my estimation — established himself as a team leader and would be one of the top backup quarterbacks in the league. And if the Browns can keep him for the one-year, $4.65 million contract he signed for this season, that won’t break the bank or ruin the salary cap.


But I have two reservations about whether it will get done.

After talking to Brissett before and during the season, I’m convinced he’ll pursue an opportunity to start if there’s one available. He won’t be handed a starting job by any team but could land in a competition somewhere. If that’s not an option, I could see him returning to Cleveland.

The second hesitation I have is if the Browns would strongly prefer a backup with a skill set more similar to that of starter Deshaun Watson. Joshua Dobbs, who’s backing up Brissett, qualifies and is much cheaper than Brissett. But Dobbs has almost no NFL playing experience.

Browns at the bye: Dissecting a frustrating first half of the season

A: It’s too early for that. Wills, the left tackle taken No. 10 in the 2020 draft, has stayed healthy and played better this season but remains too inconsistent for a long-term, big-money extension. The first decision for the Browns will be whether to pick up his guaranteed fifth-year option by May, which should be around $20 million for 2024. I’d expect the Browns to pick up the option and use the next two seasons to determine whether Wills is the right guy for the long haul.

Q: I had to share noticing in an article somewhere that the Browns lead the NFL in available cap space (again) this year at over $33 million. The next-highest figure is less than $12 million.

It is inexcusable how taken for granted fans are by this organization. Do they not recognize nor feel an obligation to provide these paying customers with the best possible roster at ALL TIMES? Where are the veteran reinforcements for the injured and ineffective defensive line, especially the defensive tackles, and the linebackers?

A: I think we’ve talked about this before and my answer, while unsatisfactory to you, remains the same. I believe the Browns are saving salary cap space to roll it over for future years when some huge contracts hit. The disparity between the Browns’ cap space and the next team’s is so large it illustrates an organizational philosophy.

I think there’s a middle ground in which they could save for the future while adding quality depth. The front office obviously disagrees because it hasn’t addressed the perceived weaknesses at defensive tackle and receiver. General manager Andrew Berry did trade for linebacker Deion Jones.

I asked Berry about the situation last week.

“I think all of those decisions from year to year are kind of just dependent on where you are with your team,” he said. “In terms of the cap space ask, we always look it over like a multiyear period. There are some years you will be relatively tighter. There are some years where you will have a little bit more room. That is probably the simple way to say it without being too technical.”

Q: How badly do the Browns miss Jarvis Landry’s leadership?

A: I can’t quantify it exactly, but Landry is certainly missed. He was respected throughout the locker room, and his famous “contagious” speech resonated for years.

I think the Browns have leaders in the locker room but perhaps no one with as forceful a presence as Landry. He drove teammates to practice harder and play harder. Meanwhile, when the losses piled up in the first half of this season, the leadership was questioned, even by someone in the loud locker room after the loss to the Ravens.