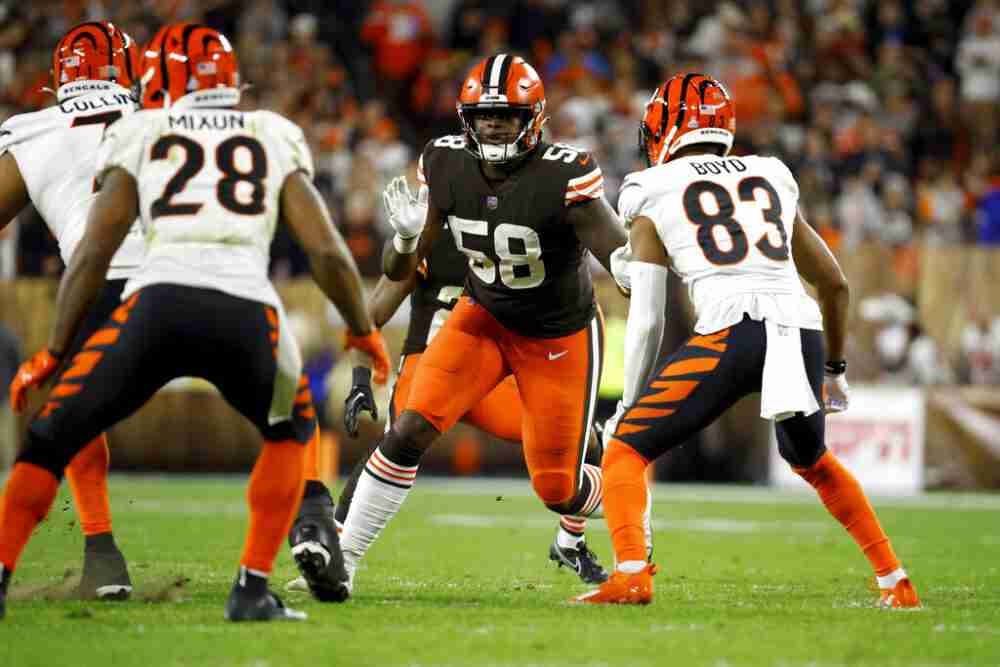 Isaiah Thomas had played five NFL games without a sack but envisioned his breakthrough coming Oct. 31 against the Bengals on national TV.

“I’ve always known I was going to get it sooner or later. And honestly in that moment, you can ask some of the D-linemen, I called it,” the rookie defensive end said.

Thomas noticed left tackle Jonah Williams was susceptible to the chop of his hands and told Browns teammates the plan of attack.

Thomas knocked down Williams’ hands, giving him the freedom to get past and take down quarterback Joe Burrow for one of five Browns sacks in a 32-13 victory.

“He kept anchoring on power, so I just put some finesse in there,” Thomas said.

“He always talks like that. He always brings that energy,” Garrett said. “Isaiah had really been preparing him for power and once he hit him with the long arm and he sat his feet down and he went with the chop from the side, he had him beat. He had him dead in the water.

“When you see it, it looks like he barely touched him just because it came off so smoothly and he cut him down. It was a great choice of rush and when those come it just feels like you’re water.”

Thomas (6-foot-5, 266 pounds) added a tipped pass and three tackles in 18 defensive snaps, but the sack is what will stick with him.

“It was similar to my first sack in college,” he said. “It was in the Big 12 championship and came off the edge and chased the quarterback, and I had that same emotion, that same feeling like I belong here, I’m meant to be here.

“I want this to be a snowball effect with success for future games and just be consistent with it. Just proving that I belong here.”

Thomas, a seventh-round pick out of Oklahoma, was inactive for two games early in the year and only got consistent playing time the last three games, hovering around 20 snaps. He has seven tackles, two quarterback hits, two passes defensed and a fumble recovery, and feels himself improving as the Browns prepare to play the Dolphins on Sunday in Miami.

“I think what comes from that is just big confidence and morale boosters week in and week out,” he said. “Once you can convince yourself that no one can stop you, it turns into reality out there on the field and week by week I just want to build off that. And this game hopefully I can continue that path and that trajectory of success.”

Thomas’ acclimation to the NFL and emergence as a reliable piece of the rotation were delayed by a broken hand during training camp. After two sacks in the preseason opener against Jacksonville, he slipped in a one-on-one pass rush drill in practice, tried to brace himself and the right index finger bent backward. He thought he jammed it, but the fracture started in the finger and went into the top of his hand. He missed time then was forced to play in a cast into the regular season.

“Man, it stumbled me a little bit,” he said. “‘I know I’m not playing to my full potential. I know I’m capable of doing what I know I can do, but with this cast on I’m limited to a bunch of things.

“It was a setback for sure. I say more so mentally than anything. And I’m just out here, ‘Dang, I want to show that I belong but I can’t show them what I can do with one hand.’ Now it’s 100% and it’s feeling like that Jacksonville week all over again. I just want to keep it going.”

Not only was Thomas limited to lining up on the right side because of the cast, he couldn’t rely on one of his strengths — powerful hands.

“I think over time I would’ve gotten used to it and found a way to be successful with it,” he said. “But it happening so abruptly and me being a rookie and already mentally trying to figure out everything, it slowed me down. It hit me out of nowhere and I wasn’t prepared to go through that.”

He eventually made it through to the other side.

“At the end of the day you’ve got to find a way,” Garrett said. “We’ve all been facing adversity, and he’s no different. He’s attacked it, he hasn’t complained, hasn’t asked for any sympathy, the man just goes and attacks each day.”

Coach Kevin Stefanski has been impressed with Thomas’ dependability.

“As you see him getting more opportunities and a little bit more exposure to him, I think you are seeing a player who is going to do his job every play,” he said. “He is going to know what to do and he is going to do it. I just think he is a good all-around football player the more reps that he gets.”

Thomas and fellow rookie Alex Wright, a third-round pick, have the benefit of learning from a pair of proven ends in Garrett and Jadeveon Clowney. Garrett is arguably the best in the league, and Clowney is a three-time Pro Bowler who excels against the run and as a pass rusher.

“Having guys in front of you that know what it takes to be successful as an individual and as a teammate, it helps out a lot,” Thomas said. “And just learning little things from them. Not even just football stuff, just life in general. It keeps you at ease and it keeps you confident in your abilities.”

If the Browns are going to make a run in the second half, the defense must continue its improved play from the last two games, with the pass rush leading the way and Thomas contributing.

“I want my presence felt in a positive way when I’m out there, no falloff for sure,” he said. “I don’t want people to be nervous when I come in for Jadeveon or Myles. I want people to be, ‘OK, we’re good.’”