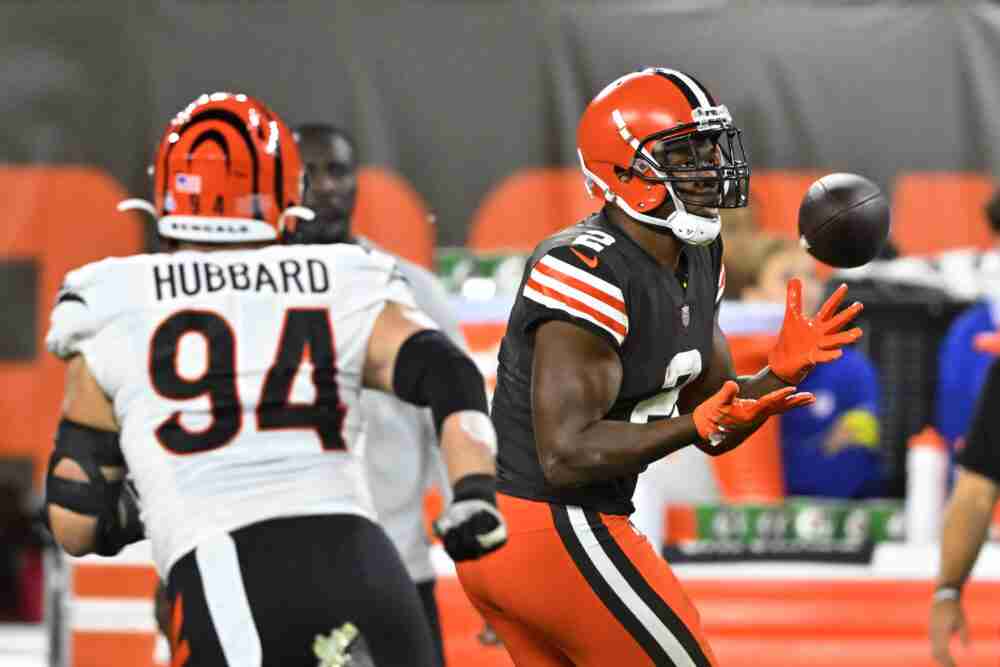 BEREA — Quarterback Jacoby Brissett and receiver Amari Cooper shared a bond long before they became teammates and friends this season.

“When you’re from a certain place you automatically have certain things in common culturally, certain words and stuff that you use and certain places,” Cooper said Thursday. “So we were able to jell really quickly.”

The Browns (3-5) will visit the Dolphins (6-3) on Sunday. Brissett, who’s from West Palm Beach, downplayed the return home. Cooper, who’s from Miami, embraced it.

“Yeah, I mean it’s the place I grew up at, grew up a Dolphins fan, so of course,” he said, listing Ricky Williams, Chris Chambers, Zach Thomas, Jason Taylor and Ronnie Brown as some of his favorite players. “I’ve got family going for sure.”

Cooper quickly became Brissett’s No. 1 target. He leads the team with 39 catches for 553 yards, a 14.2 average and five touchdowns.

“We now have a really good understanding of what he does extremely well, and we are trying to put him in the best positions for him to be successful,” coordinator Alex Van Pelt said. “I know Jacoby has a real good feeling of where he is going to be, when he is going to come out of breaks and how he is going to run his routes. It is paying off. He has really done a great job. We were lucky to get him.”

The Browns got Cooper in March in a trade with the Cowboys. Being around him every day has been illuminating for Van Pelt.

“Just his route-running ability,” he said. “You see it on tape, but until you really get to hear him talk through how he runs his routes and the way he is explosive and powerful. DBs are kind of afraid to get too close to him because he is strong, he can run through the break points, through contact and he has a great burst. Really just his knack for route running.”

Cooper is always fine-tuning his craft, so he used the bye last week to study his tendencies.

“Try to put myself in the mind frame of the guys who are guarding me, try not to tip them off too much and if I feel like I am, I try to change some stuff up,” he said. “At least in my eyes, sometimes I give the DBs too much credit. Sometimes I think they’re three steps ahead when really they aren’t.”

Coaches and teammates can’t say enough good things about Brissett, but he will be pushed aside when Deshaun Watson returns from an 11-game suspension. The plan is for him to start Dec. 4 against the Texans as soon as he’s eligible.

“It is a good-bad decision. It is tough, but it is good,” Van Pelt said. “We are going to have two really good players that we feel comfortable we can win a lot of games with.”

The Browns have known all season a switch to Watson was coming, but left guard Joel Bitonio doesn’t think it’s affected the team.

“I think the guys have been focused on playing the next game and who we have right now,” he said. “Deshaun’s been around the team and it’s been great to have him in the building, but right now Jacoby’s been out there. He’s been our guy and that’s what we’re rolling through.”

Watson’s suspension started Aug. 30, he returned to the building Oct. 10 and can begin practicing Monday.

Van Pelt raved about Brissett’s ability to go through his progressions in a timely manner.

“It was a low kick. We just need to do a better job with elevation consistently,” Priefer said.

York’s 60-yarder against the Ravens the previous week was also blocked, but the extra distance required a lower kick and Baltimore’s Malik Harrison jumped high to deflect it. York responded to the blocks by drilling a 55-yarder to end the half in the win over Cincinnati.

“He is everything I thought he would be in terms of talent, leg strength, his mental approach to the game and how important it is to him,” Priefer said. “Whenever he has had a day in practice where he has not been as good or a game where he misses a kick, he goes back and does a really nice job evaluating why did he miss a kick or why did he hit the ball low, and he goes out and does everything he can to correct it. He is a student of the game, and he has a great mindset.

“I am excited for his future here in Cleveland and, of course, the rest of the year he is going to help us win a lot of games down the stretch.”

Tight end David Njoku (ankle) and linebacker Jeremiah Owusu-Koramoah (knee) didn’t practice again and worked on the side. Neither played Oct. 31 against the Bengals before the bye.

** Rookie cornerback Martin Emerson Jr. (illness) returned to practice after missing Wednesday and was a full participant. Rookie defensive tackle Perrion Winfrey (illness) was out for the second straight day.

** Guard Michael Dunn (back) was added to the injury report and was limited. Right guard Wyatt Teller (calf) was limited for the second straight day after missing the last two games.

** For the Dolphins, left tackle Terron Armstead (toe) and right tackle Austin Jackson (ankle/calf) were limited after not practicing Wednesday.

Miami’s Mike McDaniel is getting great reviews in his first year as a head coach. The Dolphins are 6-3 overall, 6-0 when quarterback Tua Tagovailoa starts and finishes the game.

“Coach Mike does a great job putting us in great situations offensively,” Tagovailoa told Dolphins reporters. “Continues to give other people praise, but he doesn’t get as much praise as I think he should.”

Cleveland defensive coordinator Joe Woods was on the 49ers staff with McDaniel under coach Kyle Shanahan.

“First of all, he is a really great guy,” Woods said. “Everybody in the building loved him. Very smart.”

“You knew it,” he said. “Just being in that system, those guys when they perform well, they get jobs. I knew it was just a matter of time before he would get one.”

The Browns used eight offensive linemen for a play against the Bengals and call the personnel package “double muscle.”

“It is fun to signal — it looks like you are flexing,” Van Pelt said. “You are just getting creative.”

** Cornerback Herb Miller was signed to the practice squad after being waived from the active roster earlier in the week.