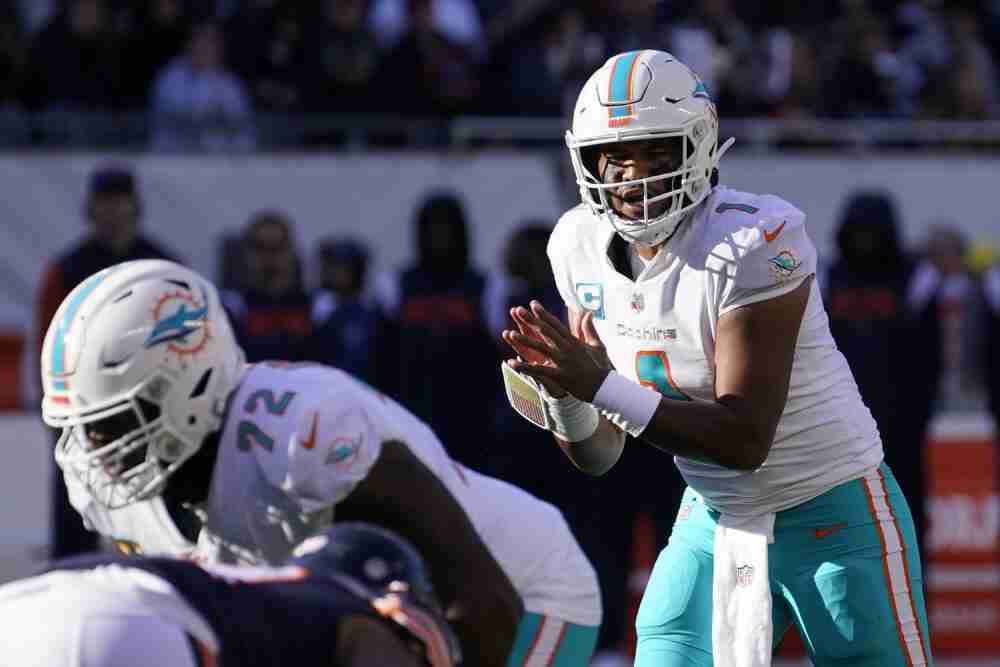 MEET IN THE MIDDLE

Safeties John Johnson III and Grant Delpit and linebackers Deion Jones and Sione Takitaki better be on their toes and on top of their games because the Dolphins’ second-ranked passing game lives in the middle of the field. Quarterback Tua Tagovailoa is best throwing between the hashes, and coach Mike McDaniel loves the options provided by in-breaking routes such as slants and digs.


Refreshed by the bye, Myles Garrett, Jadeveon Clowney ready to get after Dolphins QB Tua Tagovailoa

“When you do that, you are not going to run out of grass. You are going to not use the sideline sometimes to your advantage as a defense,” Browns coach Kevin Stefanski said. “When you work the middle of the field and you work in between the numbers, you can catch and turn and get YAC (yards after catch).”

Miami receivers Tyreek Hill and Jaylen Waddle are among the fastest players in the league and can run by a defense with or without the ball. Hill leads the league with 76 catches for 1,104 yards and is on pace to break Calvin Johnson’s NFL season record for receiving yards (1,964). He’s tied an NFL record with four games with 10 catches and 150 yards and has eight games left to break it. Waddle is fifth in the league with 812 receiving yards, on 47 catches with six touchdowns. Hill and Waddle have the most receiving yards by teammates in the first nine games in the Super Bowl era and have more than 10 teams this year, including the Browns.

Delpit said the key to slowing them will be “angles” and “timing.”

“They’ve got a good squad over there, they’ve got good game plans and they get the ball in their hands,” he said. “It’s going to be a challenge.”

In Hill’s first year in Miami after a trade from Kansas City, he’s become the focal point.

The communication of the defense has been better after critical breakdowns in the first two games and must be on point against the Dolphins.

“When you’re playing a group of receivers that’s this fast, that can literally take the top off on any single play, you definitely have to have your communication on 100 percent and I think we’ve been doing a great job with that so far,” cornerback Greg Newsome II said.

The Dolphins have averaged 27.5 points in the six games — all victories — Tagovailoa has started and finished. With Miami’s quick-strike ability, the Browns would be best served to possess the ball, control the clock and shorten the game. All-world running back Nick Chubb should allow them to do that against a Dolphins run defense ranked 15th in the NFL (117.4).

“We always talk about possessions, possess the ball and score in the red zone,” coordinator Alex Van Pelt said. “We would love 11-, 12-play drives that end in touchdowns, but we will take a two-play drive. The goal obviously is to ‘matriculate the ball down the field’ to quote some coaches.”

Van Pelt had a quick caveat, saying they’re not overly concerned with dominating time of possession.

“We need to be productive and score points,” he said. “They have to match us, as well. We plan to score every time we touch the ball. We feel that with our offense, we want to possess the ball, drive and score touchdowns and not really concerned about the other side.”

The Browns rank seventh with 25.0 points a game, and the over/under is 49.5, according to BetMGM. Quarterback Jacoby Brissett’s only focus is scoring “one more point.”

“It’s just go out there and win a game,” he said. “Whatever we need to do on offense to win a game on our side of the ball, I’m sure we’re going to do it.”

Chubb is second in the league with 841 yards and first with 10 rushing touchdowns, and the Browns rank third in rushing with 164.6 yards a game.

“We know they’re a great offense, so we’re going to have to bring our A-game,” left guard Joel Bitonio said.

ON THE ROAD AGAIN

The Browns will play six of the final nine games on the road, starting with the trip to South Florida. Home-field advantage isn’t what it used to be in the NFL, but life on the road brings plenty of challenges. The Browns can overcome those by doing a better job in the turnover battle and in the game’s final minutes.

“The NFL game, you have to go on the road and win in some tough environments where it is loud, and that has an effect on the offense, particularly on third down, so you have to be great in your operation,” Stefanski said. “We have one more road game than home game this year. You can’t control how the schedule shakes out and those type of things. You really do have to have the mentality that you will play anybody anywhere wherever it shakes out.”

The Dolphins are 9-1 in their last 10 games at Hard Rock Stadium in Miami Gardens. They’re also 5-0 this year in games decided by six points or fewer, including each in their current three-game winning streak. Safety Jevon Holland credited their success to having a “peaceful mind” in the tensest moments.

“Sometimes you can let emotions get the best of you,” he said. “It’s a big game and you kind of get besides yourself or even the moment itself. It can get too big, but really just kind of staying within your keys, understanding that it’s just another down regardless of it’s the game to win a Super Bowl or if it’s the game to just win one game in the regular season. You’ve just got to play it for what it is and go out there and execute.”

The Browns are 1-2 on the road and 1-4 in games decided by three points or fewer.

“Our team has been in situations where we know if we have fallen short we just needed one more play from this side or one more play from this player or whatever it is,” Stefanski said. “We know the margins are so small in this game. That is why it is so important to play that complementary football and understand that it is going to take all three sides of the ball.”

A couple of extra possessions would help. The Browns are tied for 25th with a minus-4 turnover margin and have forced only eight takeaways in eight games, including two in the win over the Bengals before the bye.

Player in the NFL with at least seven sacks in each of the last six seasons — Myles Garrett.

Coach Kevin Stefanski’s record after a bye week, and against the AFC East.

Passer rating on third down for Miami’s Tua Tagovailoa, the highest in a season since the league began tracking in 1991. He’s completed 73.7 percent for 601 yards, eight touchdowns and no interceptions.

The defense is playing better, the win over the Bengals created momentum and the Dolphins are due for a setback. Browns 27, Dolphins 24.

Commentary: One thing you know about the Browns is you don’t know
Commentary: Failure to show should show everyone something about these Browns