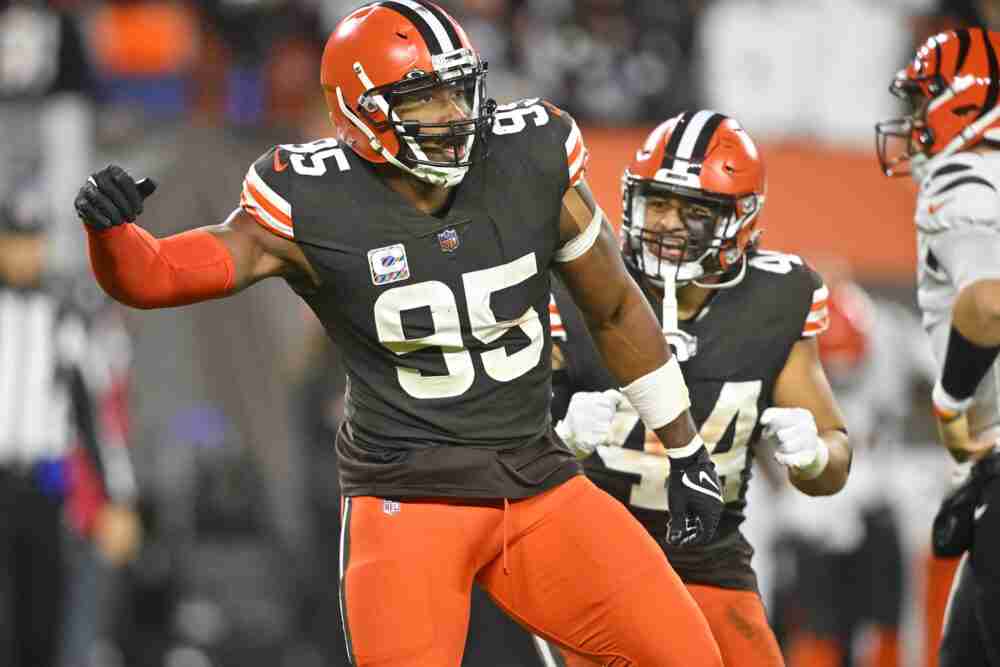 The Browns found something in the win over the Bengals.

They’re doing their best not to lose it.

The 32-13 win on Halloween provided a necessary jolt before the bye week. The season will only be truly saved if the Browns (3-5) can make a run to the playoffs. That requires stacking wins, preferably starting Sunday on the road against the Dolphins (6-3).


The victory over the Bengals was Cleveland’s best and most complete performance. The offense was balanced, efficient and explosive, and the defense sacked the quarterback, played tight coverage and tackled well.

The players point to another important change before the primetime showcase.

“I felt a little different energy out of the locker room into the stadium for the first snap and it held true throughout four quarters,” said quarterback Jacoby Brissett, who threw for 278 yards and a touchdown and ran for a touchdown.

Refreshed by the bye, Myles Garrett, Jadeveon Clowney ready to get after Dolphins QB Tua Tagovailoa

Receiver Amari Cooper agreed. He caught five passes for 131 yards and a touchdown.

“I can’t really explain it,” he said. “It seemed like we were just more ready to play for some reason.”

Maybe it was the melodies.

“We don’t usually play music in the locker room,” said defensive end Myles Garrett, who has 4.5 sacks in the last three games. “All of a sudden guys are flying around and making plays all over the field.

“I don’t know if it was the ’90s rap, but we have to find something that everybody can get jamming to and wanting to play as hard as they can with.”

Defensive end Jadeveon Clowney said the energy surged during the week leading up to the game. The sense of urgency was obvious.

“I just hope that keeps rolling over and leading us to winning games,” he said. “That’s where we need to be.”

The Browns haven’t won two straight this season but lost four in a row for the first time in coach Kevin Stefanski’s three years. They were grateful for the midseason bye, as it provided time to get healthy and reflect on the first half, but the timing was only beneficial if they can pick up where they left off against the Bengals.

“Our last game, our last win,” Cooper said. “So we still feel that momentum.”

Maintaining it is the next step.

The Bengals game was proof of how well the Browns can play if they follow the correct script.

“I think guys kinda saw it all come to fruition and hopefully just doing that again.”

Clowney said nothing was left to chance after the return from the bye.

“I feel like the coach is doing a good job in trying to have a plan this week exactly like how it went last week, doing the exact same thing, layout, walkthroughs, everything, try to pull it out again,” he said.

The performance of the defense was the biggest difference-maker against the Bengals. The offense has mostly been effective this year, but the defense dragged down the team with communication breakdowns in the secondary the first two weeks then awful run defense for a pair of games.

The Browns rank 15th in yards allowed (331.4), tied for 24th in points allowed (24.9) and tied for 25th with eight takeaways. Against the Bengals, they sacked Joe Burrow five times, limited Cincinnati to 36 rushing yards and didn’t allow a point through the first three quarters. It followed a quality defensive outing the week before in a 23-20 loss at Baltimore.

“Being more comfortable, guys doing their job,” safety John Johnson III told The Chronicle-Telegram. “We had to touch the stove, we had to see how things could go sour if you don’t do your job. So I think now it’s the understanding we could really be great if everybody locks in.”

“It’s that attention to detail,” Garrett said. “Falling in love with doing the little things and then executing out on the field. And I think everyone’s really falling in line and doing that.”

Coaches and players cited better game plans and preparation and more accountability and discipline. No. 1 cornerback Denzel Ward, who’s back to face the Dolphins after missing three games with a concussion, mentioned a big improvement in communication.

“Guys have been playing fast, physical and doing their jobs,” he said. “Everybody’s on the same page. We’ve got the guys in the room and the coaches that’s capable of going out there, getting wins and taking care of the job.”

The defense had a significant turnaround last season, playing much better over the final seven games. The desired transformation this season will be tested by a high-powered Dolphins offense. Miami has won three straight and has MVP candidates in quarterback Tua Tagovailoa (league-leading 115.9 passer rating) and receiver Tyreek Hill (league-leading 76 catches and 1,104 receiving yards).

“Those are special players, but at the end of the day we have special players ourselves, so we’re going to go out there confident regardless of who’s opposing us,” Garrett said.

Cornerback Greg Newsome II said the defense never lost its swagger despite the struggles and injuries. It did receive a boost from the outing vs. the Bengals.

The players realized the season was slipping away after four straight losses and a few labeled the visit from the Bengals a must-win. After a victory of that magnitude, the team has a fresh outlook.

“It’s understanding, ‘Listen, we’ve got the whole season ahead of us. We got a big game coming up this Sunday. Let’s go try to do the same thing again and play good football in all three phases of the game,’” Brissett said.

Refreshed by the bye, Myles Garrett, Jadeveon Clowney ready to get after Dolphins QB Tua Tagovailoa
Jacob Phillips on mend from ‘crushing’ torn pectoral injury, hopes to leave injuries in past