Deshaun Watson returns to practice, Jacoby Brissett says it’s not his job to ‘balance’ reps and Nick Chubb says transition ‘won’t be awkward at all’ 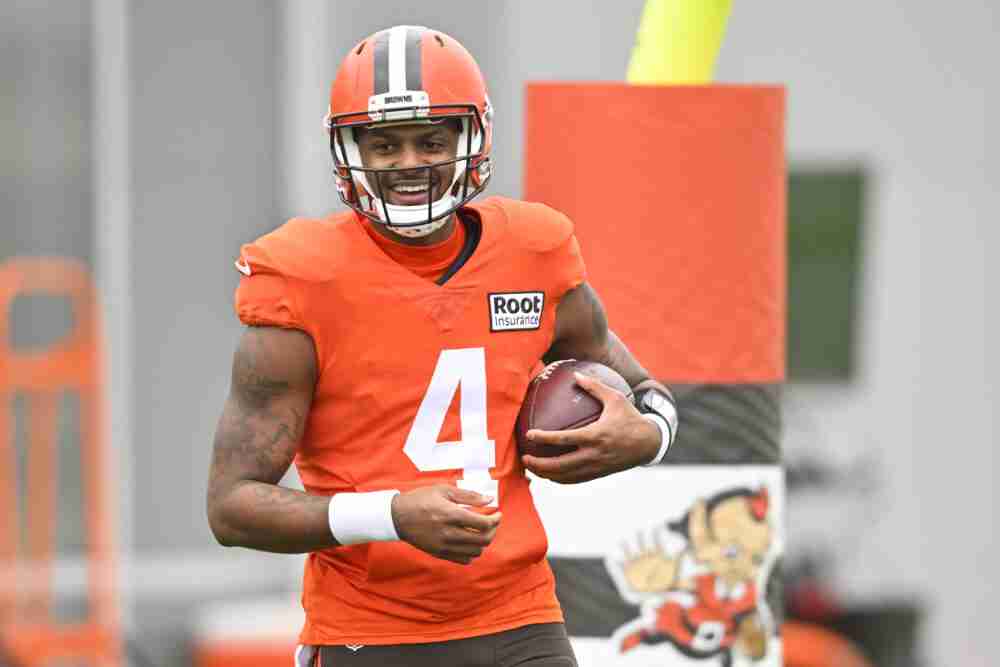 It also prompted coach Kevin Stefanski to adjust his practice plan for the quarterbacks and created the potential for an uncomfortable dynamic within the locker room as the team prepares for the transition of power at the game’s most important position.

Browns preparing — and some hoping — for snow game in Buffalo


“That’s not my job to balance it,” Brissett said before practice. “It’s Coach’s job to balance how he splits things up and stuff like that. I just have to go out there and prepare like I always prepare. Do my job and then control what I can control. That’s something I can’t control and I’m honestly not trying to.”

Watson practiced with teammates for the first time since his suspension started Aug. 30. He went third in the rotation during individual drills, following Brissett and backup Joshua Dobb and ahead of No. 3 quarterback Kellen Mond, who’s been a healthy scratch all season.

Analysis: Plenty of troubling signs in another troubling loss

Coach Kevin Stefanski said the No. 1 priority is preparing Brissett but wouldn’t give any specifics on the number of repetitions each quarterback will get or if Watson’s workload will increase over the next two weeks. Reporters aren’t allowed to watch once team drills start.

“We really don’t do that for any of the guys,” Stefanski said of divulging practice reps. “It is going to be good to have him out there at practice with his teammates.”

Jacob Phillips on mend from ‘crushing’ torn pectoral injury, hopes to leave injuries in past

Brissett’s comfortable with the plan.

“Oh, yeah, for sure,” he said. “We’ve talked about a lot of things going into practice about how things will be split up and I feel confident that I’ll be more than fine going into the game.”

The drawn-out switch to Watson has the potential to be awkward, especially in the two weeks before it happens. Brissett has played well despite the Browns’ 3-6 record — 63.8 completion percentage, 2,074 yards, eight touchdowns, five interceptions, 87.1 passer rating — and become a leader and favorite in the locker room.

“You guys know the two parties at hand here,” Stefanski said. “These are professionals. These are good people. They are friends. That is probably the most important thing.”

Running back Nick Chubb said the team will take the quarterback situation in stride.

“Jacoby’s our quarterback. He has been since the beginning of the season. So it won’t be awkward at all,” he said. “But we’re also excited to see Deshaun come out and get some reps and see how he’s doing.”

“What is important is that we do everything we can to find a way to get a win versus Buffalo,” he said. “That is where the players’ focus is.”

Watson’s comeback was impossible to miss. Cameras from ESPN and NFL Network joined the local media to chronicle his every move during the 25 minutes of practice open to reporters, and Watson wore bright orange socks to match his cleats, jersey and helmet.

Watson, 27, hasn’t talked to reporters since Aug. 18, when he reached a settlement with the NFL in which he’d serve an 11-game suspension, pay a $5 million fine and undergo treatment. More than two dozen women have accused him of sexual misconduct during massage therapy appointments. He’s maintained his innocence, wasn’t indicted on criminal charges by two Texas grand juries and had settled 23 of 24 civil lawsuits before another was filed recently.

Watson was banned from the team facility when the suspension started and was allowed to return Oct. 10. He’s participated in meetings since and worked with the strength and conditioning staff but wasn’t allowed to attend practice or games.

He’s a three-time Pro Bowler who led the league in passing in 2020 — the last year he played — and was acquired in a March 18 trade in which the Browns sent a net of five draft picks, including three first-rounders, to the Texans. The Browns signed him to a five-year, fully guaranteed $230 million contract.

With the temperature just above freezing and some of his teammates in layers Wednesday, Watson went sleeveless. He threw throughout the individual drills and jogged from one end of the field to the other.

Stefanski has been mindful of quarterback repetitions since the offseason program started in April. Watson took nearly all the first-team reps throughout the offseason and at the start of training camp, then gave way to Brissett when the suspension became inevitable.

“You bank those reps,” Stefanski said. “He has a lot of reps that he can rely on and can watch the tape of him running plays that he will be asked to run when it is time for him to play.

“The most important thing right now is getting ready for Buffalo and getting Jacoby ready to play. He is going to put everything he has into this game like he does each week. His preparation is not changing. My preparation with him is not changing. It is just a matter of finding the right amount, and that is something that we just have to work through.”

Ward said the team is good with either quarterback.

“They’re both leaders for our team and guys we rally behind and looking forward to getting some more wins behind those guys,” he said.

Linebacker Deion Jones arrived in a trade last month so he had yet to practice with Watson when he spoke to reporters.

“I can’t wait to see him on the field,” he said. “I expect him to do what he loves to do — be a great quarterback. Do what he does best — throw the ball, be a leader, the same things we’ve seen him do before and just get back in the groove.”