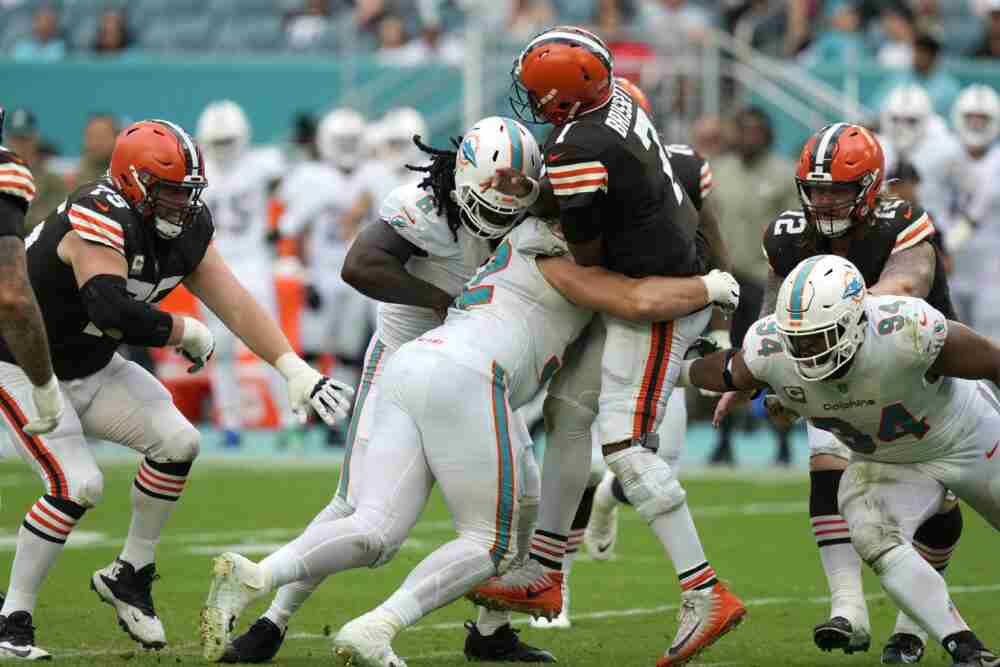 BEREA — The offensive line has been a strength of the Browns for the last few years.

It was one of the many weaknesses Sunday in the 39-17 loss to the Dolphins.

The Browns finished with 112 rushing yards and 4.7 per carry but were held to 30 yards on 14 attempts in the first half. The pass protection was worse, as Jacoby Brissett was sacked three times and officially hit 14 times.


“We were not good enough,” All-Pro left guard Joel Bitonio said Thursday. “It was probably collectively our worst game of the year on the O-line and just something that we don’t want to accept.

“It’s unfortunate, you never wanna play like that, but we’re real focused on just getting better, getting back to the fundamentals and just trying to take that next step as a group because they’re a good front coming up this week, as well.”

The Browns will play the Bills in Detroit on Sunday after the game was moved from Buffalo because of dangerous weather conditions. The Bills are second in the league in points allowed (16.8 a game), eighth in yardage (319.8), seventh against the run (109.6) and 14th against the pass (210.2). They’re tied for eighth with 27 sacks.

After the struggles against the Dolphins, veteran line coach Bill Callahan didn’t hold back on his guys.

“Harder (on us) this week,” Bitonio said. “That’s his job to coach us up, and you’re already frustrated because you know you didn’t perform up to your standard and this week he let us know it wasn’t good enough.”

Bitonio gave credit to a strong Dolphins front but placed the blame on the offensive line’s shoulders.

“They executed really well but there was just some mishaps that were unusual for us in the sense of a missed assignment or something like that where usually we’re on the right guys and there’s a couple times where we had a few guys running free,” he said.

The line was hurt when Pro Bowl right guard Wyatt Teller left in the first quarter. He missed the previous two games with a calf strain, returned to practice last week and started the game but wasn’t able to perform well enough. Teller was limited Wednesday this week and practiced fully Thursday, and the hope is he’s able to play a complete game against the Bills.

“It is an anomaly. It was one of those days where we just did not play well collectively, which is rare for our group up front,” coordinator Alex Van Pelt said. “There is no one who is going to work harder to correct that than that group of men in that room, so I am not worried about that at all. Those guys hold themselves to a super high standard.”

Defensive coordinator Joe Woods may receive the most criticism on social media of anyone in the Browns organization, and that revved back up with the defense’s outing against the Dolphins. Miami rushed for 195 yards and threw for 302. Cleveland’s only sack was on a trick play.

“It is a part of the business,” Woods said of the criticism. “You can’t let it affect you. You can’t ride the emotional roller coaster.

“I know what type of business I am in — it is a fair business — but we are in the business of winning, and right now we are not doing it, so that criticism is going to come. It is deserved in some instances. I promise you, I am trying to do everything I can to get the thing turned around, but we have to execute and we have to play better on gameday.”

Woods said he took a straightforward approach with his players this week.

“Honesty. We looked at the game and we talked about what we did well and what we didn’t do well and the things we need to do to fix it, whether it is scheme or whether it is execution,” Woods said. “I am just going to tell them the truth — good or bad, it doesn’t matter. In this league, you have to move on. Moving on to Buffalo, we know what those challenges are and feel like we have a good game plan and the guys have practiced good so far this week.”

Tight end David Njoku (ankle) returned to practice and was a limited participant. He looked good running a deep route during the portion of practice open to reporters.

** Right tackle Jack Conklin (foot) got a day of rest and worked on the side.

Quarterback Deshaun Watson’s return to practice Wednesday was deemed a success. He hadn’t practiced since his 11-game suspension started Aug. 30.

“He looked good,” Van Pelt said. “I know he has been working hard while he has been away from the building. Excited to see him out there. He made some throws after practice — we call it opportunity period — where you are like, ‘OK, that is impressive stuff.’”

Deshaun Watson returns to practice, Jacoby Brissett says it’s not his job to ‘balance’ reps and Nick Chubb says transition ‘won’t be awkward at all’

Van Pelt said it’s not tough balancing getting Watson first-team practice reps while keeping Brissett ready to start the next two weeks until Watson returns to games Dec. 4 in Houston.

“But you have intent of what you are trying to get done and what reps that you can give Deshaun that you feel like Jacoby has a great understanding of that does not actually need that rep again,” Van Pelt said. “You are trying to make sure that you have the right plays selected for Deshaun while at the same time not shorting Jacoby and his preparation.”

THE MORE THE MERRIER

No. 1 receiver Amari Cooper was targeted a season-low three times against the Dolphins, catching all three for 32 yards. He was asked why only three.

“I don’t know,” he said. “I caught all of them though, so hopefully that helps get more.”

Van Pelt said it’s not fair to use targets as a measure of intent.

“A lot of those early calls, he’s No. 1 in the progression,” Van Pelt said. “Defense dictates where the ball goes. We definitely have a heightened awareness of trying to get him the ball early and often. Sometimes the defense doesn’t allow for that.”

Cooper didn’t practice Wednesday but was looking forward to again sharing a field with Watson and planned to put in extra time to re-create chemistry.

“Just whatever it takes, talking to him, getting more reps in after practice,” Cooper said. “It’s actually something I’m really excited about.”

Cooper, 28, has been getting a day off of practice every week to rest and said it’s highly beneficial.

“It’s been very helpful just with the body, the recovery, an extra day is like an extra week,” he said.

“Jerome has really embraced that role,” Priefer said. “He made some mistakes early in the year in terms of decision-making, but he has improved there a lot. The more he does it, the better he will get.”

** Former Browns running back Duke Johnson is on Buffalo’s practice squad and returned kickoffs last week, including a 43-yarder.

“He has great vision and runs hard,” Priefer said.

** Cooper appreciated the leaping one-handed catch Vikings receiver Justin Jefferson made on fourth-and-18 in the fourth quarter against the Bills last week.

“A really phenomenal catch and a really important part of the game, too,” Cooper said. “But that’s the old saying. Big-time players make big-time plays in big-time situations. So kudos to him.”