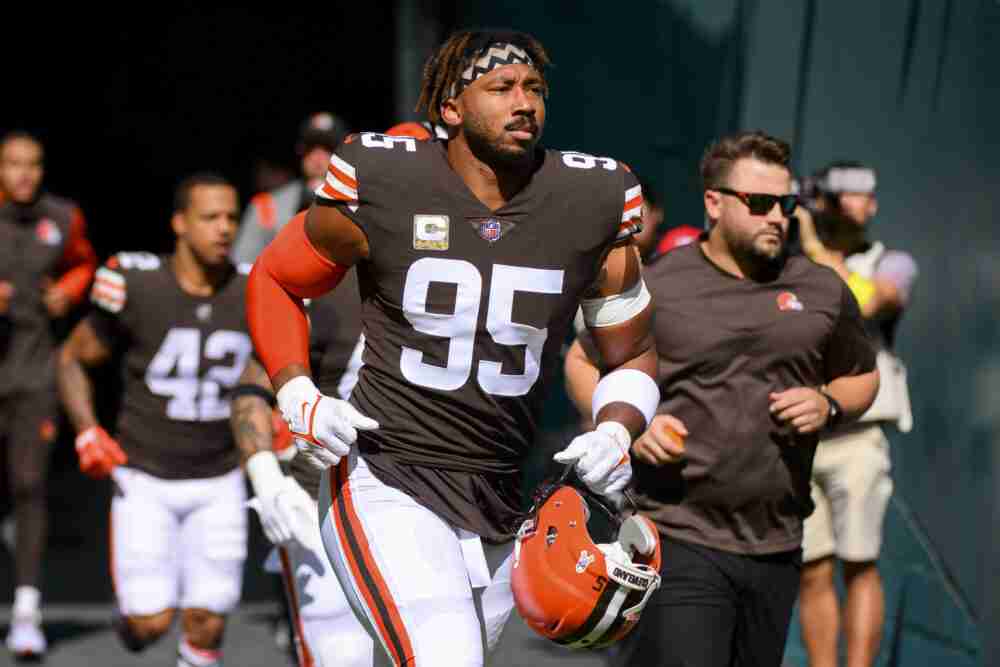 BEREA — Myles Garrett doesn’t like the artificial turf at Ford Field in Detroit.

He’s still glad the Browns will play on it Sunday against the Bills rather than in a blizzard in Buffalo.

“It benefits everybody that we’re not playing in the snow,” the All-Pro defensive end said Friday. “As much fun as it is as a kid, we get paid too much to be slipping and sliding around trying to make plays and trying to do what we do on a regular basis when we’re in 3 feet of snow.

“This turf is pretty bad itself in terms of its track record with injuries and so making sure the guys are hydrated and properly warmed up and stretched so nobody is putting themselves in danger of getting hurt. I’ll take the turf over the snow just about every day.”


Greg Newsome II out with concussion after collision in practice

The NFL announced Thursday the game would be moved to Detroit’s dome due to dangerous weather conditions in western New York. The Buffalo area got hammered with snow Friday, and the Bills canceled practice because everyone couldn’t make it to the practice facility.

“It don’t matter to me. Anywhere, any place,” said tight end David Njoku, who expects to play after missing two games with a high ankle sprain.

The Bills (6-3) planned to fly to Detroit on Saturday afternoon, and the Browns (3-6) will make the trip by bus.

“I really don’t think it is a distraction at all,” coach Kevin Stefanski said of the venue change. “The guys will go step onto a bus and end up in Detroit.”

The preparation may be basically the same regardless of the location of the game, but the reactions to the switch varied within the locker room. Some wanted to play in the snow, others wanted nothing to do with the cold.

“I’m hurt by that. I ain’t gonna lie to you. I definitely wanted that snow game,” said linebacker Jeremiah Owusu-Koramoah, who will return after missing two games with a knee injury. “I wanted to test what the heart was really about. It’s cool, man. They’ll come. We’re in Cleveland, we’ll get back to the snow game eventually.”

A person walks through Buffalo on Friday.
AP

“I was bummed,” said right tackle Jack Conklin, who hasn’t played in a snow game. “Those are the games that go down in history that everybody talks about, but it’s public safety for everybody, so it’s good that they moved it, taking care of everybody, so it will be good.”

Safety Grant Delpit is from Houston, played at Louisiana State and relies on his athletic ability.

Because it was supposed to be a home game for the Bills, they’re in charge of ticket sales. Their season-ticket members had access to a presale Friday afternoon, followed by a presale for fans on the Bills app. If tickets remained, they’d go on sale to the general public Saturday.

“I am as curious as anybody about what that is going to look like, who is going to be in that stadium and how full it is going to be,” Browns coach Kevin Stefanski said. “I think we have to get there on Sunday and see what it looks like. Obviously I would like as many people in brown and orange as we can get.”

Browns fans and Bills fans are known for supporting their teams on the road. The Bills will play back-to-back games in Detroit, as they’ll visit the Lions on Thanksgiving.

“I figure they’ll still travel well, so it will be interesting to see what happens,” Conklin said. “It’s going to be a great game either way.”

The Browns, who’ve lost five of six to fall well behind in the playoff chase, may have benefited from a sloppy playing surface. The Bills have the NFL’s No. 1 offense (424.1 yards a game), second-ranked scoring offense (27.8 points) and second-ranked passing attack (294.2 yards).

Delpit was asked if facing that offense is scarier knowing it won’t have to deal with snow, wind or rain.

“Nah, man. If you’re scared, go to church,” he said. “It’s the NFL, man, so we’ve got the same mentality going in every week. We know how high-powered they are but we know what we can do also. We respect them, respect their game, but we’re ready.”

Stefanski had prepared offensive and defensive personnel packages for a potential snow game but said there’s plenty of time to adjust. He wasn’t sure the move inside favored either team, even with Buffalo’s passing game led by quarterback Josh Allen and receivers Stefon Diggs and Gabe Davis.

“I don’t care what the conditions are, it is a difficult attack to defend,” he said. “Really, the focus for us goes back to making sure we are sound in everything we are doing. From a rush plan to a coverage plan, we just have to be sound.”

Garrett’s desire not to play on a field covered by snow doesn’t change his opinion about turf. And the Bills have turf at Highmark Stadium.

“Get rid of turf, go to grass,” Garrett said. “It’s really been a handful of stadiums that have turf that racked up a lot of injuries and some of the stars of the game have been taken out much too early for non-contact injuries just trying to plant or moving along the field doing natural movements. I think it’s time for a change.”

The NFL Players Association has made a push over the last week for the NFL to outlaw the slit-film version of turf, citing higher in-game injury rates. The Lions, Bengals, Giants, Jets, Vikings, Saints and Colts have it.

“That turf’s definitely crazy,” Owusu-Koramoah said of Ford Field. “I got a couple of tips from my Lions brothers, we’ve got a lot of Notre Dame cats on the Lions. So they were like, yeah, be careful. But I’m a player that knows how to play on different turf. We’ve been playing on turf all our life.”