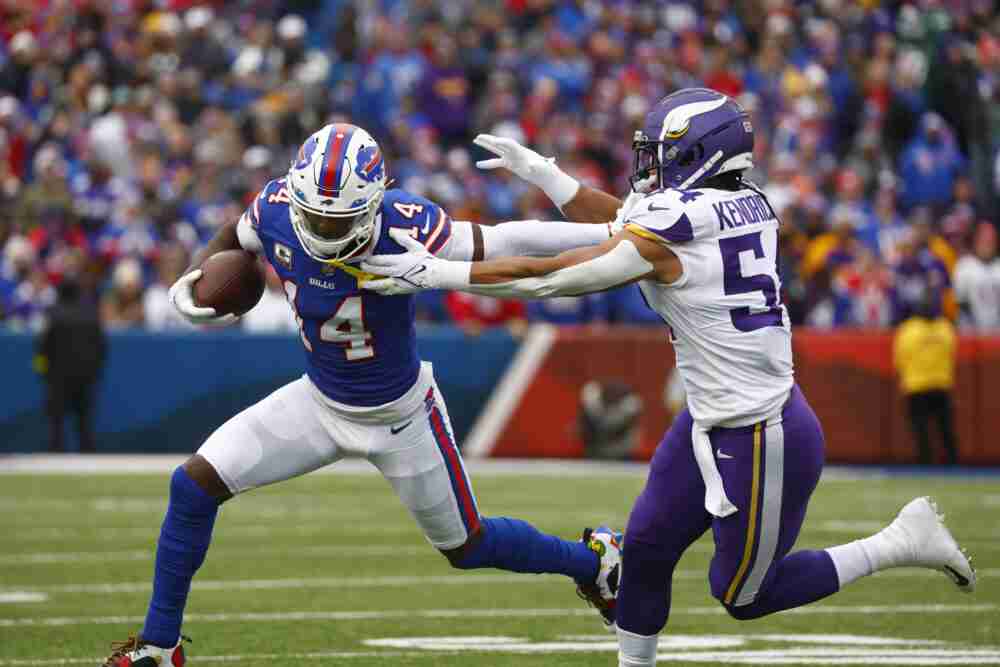 SPOTLIGHT ON THE WIDEOUTS

The Bills’ second-ranked pass game is all about the wide receivers. Stefon Diggs leads the way with 72 catches for 985 yards, a 13.7 average and seven touchdowns. He ranks among the league leaders in catches (third), yards (third) and touchdowns (tied for third).


“He’s a playmaker,” cornerback Denzel Ward said. “He gets a lot of targets for that team. Josh Allen, he trusts him to just throw him the ball regardless if he’s covered or not. Real shifty guy, good hands. He’s a real playmaker for that team.”

“Route-running, toughness and his connection with his quarterback,” safety Grant Delpit said of Diggs’ strengths.

Diggs is clearly the No. 1 option — his 99 targets are more than twice as many as No. 2 receiver Gabe Davis’ 48 — but Davis provides a huge-play threat on the other side. He has 24 catches for 544 yards and five touchdowns, and his 22.7 yards a catch leads the league. The Browns will have to match up without No. 2 cornerback Greg Newsome II, who was ruled out Friday after getting a concussion from a collision in practice. Earlier in the week Newsome compared Davis (6-foot-2, 225 pounds) to Cincinnati’s Tee Higgins.

“A lot of people don’t really talk about him as much, but I feel like guys in the league and defensive backs know he can play, for sure,” Newsome said. “It’s crazy because he’s not the fastest, but he always finds a way to get open down the field. He’s great at the catch point, can run good routes and he’s a bigger guy, a bigger target.”

The Browns offense will try to counter with Amari Cooper, who leads the team with 42 catches for 585 yards and five touchdowns but was held to three catches on three targets for 32 yards last week in a loss at Miami. The Buffalo secondary has had a variety of injuries and is still without two-time Pro Bowl cornerback Tre’Davious but ranks 14th in the league against the pass (210.2 yards).

The plan seems to make sense just about every week: Hand the ball to Pro Bowl running back Nick Chubb, control the clock and keep the ball away from the opponent’s electric offense. It’s especially logical in this matchup. The Bills are second in the league in scoring (27.8 points) and will be on the speedy Ford Field turf after the game was moved from snow-buried Buffalo. If coach and player caller Kevin Stefanski needed another incentive to keep the ball on the ground, the Bills share the league lead with 13 interceptions, so putting the ball too often in quarterback Jacoby Brissett’s hands could be dangerous.

The Browns have motivation on their side. Not only are they trying to keep their playoff hopes alive, Chubb had a costly fumble against the Dolphins — his first this season — and the offensive line acknowledged it played its worst game of the season, as the Browns rushed for 112 yards, only 30 in the first half. Chubb and the line might be the team’s biggest strengths and will be determined to redeem themselves against the Bills.

“They came out and they beat us,” Chubb said of the Dolphins. “They did everything well. A little bit on us, too, not executing as well and not taking advantage of the things they gave us.”

Chubb leads the league with 11 rushing touchdowns, is third with 904 rushing yards and on pace for career highs. Run game coordinator/running backs coach Stump Mitchell believes the three-time Pro Bowler is better than ever.

“I think that started at the end of last year, he went home, back to Georgia, prepared to be better than he was last year,” Mitchell said.

The Bills are seventh in the league against the run, allowing 109.6 yards a game.

“They play hard,” Chubb said. “Big guys up front, want to stop the run for sure. They do a great job. Very tough. They have big motors. Their safeties aren’t afraid to come downhill fast and make a play.”

Cleveland’s run game will get a boost from the return of tight end David Njoku, who missed the last two games with a high ankle sprain and provides another physical presence.

GIVING THEM AN EDGE

The Browns won’t win this game exclusively on the ground. When Stefanski goes to the air — which is often more than fans want — the top priority is stopping Bills edge rusher Von Miller from wrecking the game. He’s tied for sixth in the league with eight sacks, bringing his career total to 123.5. He has one forced fumble this year, 27 for his career.

“Everything has been his athletic ability on the edge,” Brissett said. “Obviously one of the more skilled pass rushers to ever play this game. He’s one of those guys you gotta base your game plan, your protections and everything around because of the things he can do and what he can do to a game.”

The Bills signed Miller as a free agent in March to a six-year, $120 million deal. He’s 33 years old, was the No. 2 pick of the Broncos in 2011, a three-time All-Pro, eight-time Pro Bowler, two-time Super Bowl champ and Super Bowl MVP. He seems to save his best work for the game’s biggest moments — third downs and the fourth quarter.

“Awesome player,” said right tackle Jack Conklin, who’s matched up with Miller many times. “He’s still as good as he’s ever been, and it’s a great challenge. I love playing against him. It’s tough every time, but these are the games you come to the NFL for.”

The Bills don’t blitz a lot, relying on the front four to get home, not just Miller. They succeed, as they’re tied for eighth with 27 sacks. The Browns allowed three sacks and 14 quarterback hits against Miami, and the linemen have resolved to play much better this week.

“Just gotta bounce back, get back to our rhythm, do what we do,” said left tackle Jedrick Wills Jr., who will face Miller on occasion. “It was definitely a tough week across the board last week, everybody had their bad plays, but it happens, it’s a long season, just got to make sure we bounce back and don’t double back and have two of those in a row.”

Touchdowns scored by the Bills in the second half in the last three games.

Player on the Browns with more than two sacks — Myles Garrett has 7.5.

The reeling Cleveland defense can’t stop the Bills on the fast track and in the pristine conditions of the Ford Field dome. Bills 30, Browns 24.