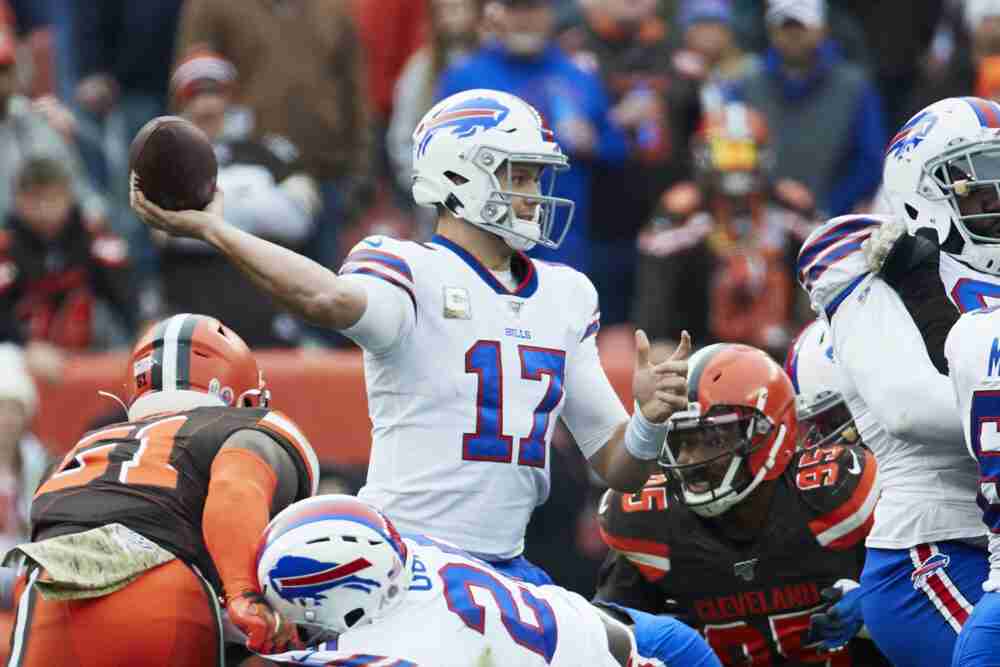 DETROIT — Limiting Josh Allen as a passer is a start. Stopping him on designed runs is a necessary second step. Keeping him from stepping on your soul as a scrambler is the final piece of a puzzle not many defenses have solved.

To say Allen is the Bills offense isn’t an exaggeration. He’s thrown for 2,733 yards and 20 touchdowns and is the team’s leading rusher with 476 yards and four touchdowns, accounting for 84 percent of Buffalo’s yardage and 83 percent of its touchdowns. His 3,209 yards are the most in the NFL.

“I mean, he’s top tier,” All-Pro defensive end Myles Garrett said Friday. “He’s always in the MVP talk and that caliber, so we have to treat him as such and respect him as such, and try to attack him just like we have with these other guys who are amongst that elite.”


The Browns (3-6) will face the Bills (6-3) on Sunday at 1 p.m. in an unusual setting. The NFL moved the game from Orchard Park, N.Y., to Detroit’s Ford Field because of a dangerous storm that dumped more than 6 feet of snow on western New York.

The Bills didn’t practice Friday because players couldn’t make it to the training facility, but they were able to fly to Detroit on Saturday afternoon. It will be interesting to see what the atmosphere and crowd are like inside the dome, and if the unusual week affected the Bills, who’ve lost two straight.

Any hope that Allen couldn’t get out of his driveway to catch the team flight wasn’t realized, so a Browns defense that ranks 31st in scoring (26.4 points) and has been a huge disappointment will have its hands full.

“He is tough to deal with,” embattled defensive coordinator Joe Woods said. “You see him on tape, you cover guys up and then he scrambles. If you bring pressure, then he is making throws. He can throw the ball forever and just flicking it.

Of everything Allen (6-foot-5, 237 pounds) does well, what frustrates defenses the most are the off-schedule plays. The pass rush and coverage can be good, but he extends the play to pick up a big chunk of yardage as a fearless runner or thrower.

“Those are really, really difficult to defend,” coach Kevin Stefanski said. “He has a big body and he is hard to get on the ground — he is huge threat to keep the play alive and survey the field for what feels like forever and then find (receiver) Stefon Diggs.

“You just have really impressive weapons on his perimeter that these plays go on for a while. You have to be ready for that. You talk about playing through the echo of the whistle. Until he is down on the ground, until it is an incomplete pass or until you heard that whistle, the play is never over with him.”

Allen didn’t have an injury designation for the game despite a right elbow injury sustained two weeks ago at the end of a loss to the Jets. He was hit while throwing, was a question mark for last week against the Vikings but played the entirety of the 33-30 overtime loss, going 29-for-43 for 330 yards, a touchdown, two interceptions, a late fumble in the end zone and a 78.6 passer rating.

He’s thrown six interceptions in the last three games, costing the Bills points with picks in the red zone. The Browns have only three interceptions on the season and won’t have No. 2 cornerback Greg Newsome II, who’s out with a concussion after a collision Friday in practice, but they were encouraged by Allen providing opportunities for turnovers.

“Yeah, he’s given away the ball, he tries to extend a lot of plays, so he’s trying to make plays and when our opportunity is there we’ve just got to make them,” linebacker Sione Takitaki said. “It’s definitely something that we’re aware of and something we want to capitalize on.”

Garrett stressed the Browns must do their part to have a chance for a takeaway.

“He might give us one if we’re where we’re supposed to be, if we’re tight in coverage and we have some pressure on him and we’ve got him on the ground a couple times,” he said. “But that’s the part of rushing and coverage complementing each other to be able to do that play by play.”

Garrett compared Allen to a young Ben Roethlisberger who’s big enough, strong enough and athletic enough to break free from pass rushers and take on linebackers and defensive backs in the open field.

The Bills are in a dogfight in the AFC East with the Dolphins (7-3), Jets (6-3) and Patriots (5-4) but remain the betting favorite to win the Super Bowl. They lost a heartbreaker to the Chiefs in the divisional round of the playoffs last year.

“It is an impressive roster — really players up and down the roster on offense, defense and special teams,” Stefanski said.

The Browns entered the season talking about all the talent on their roster, but the potential hasn’t been realized and they’re heading in the wrong direction. They’ve lost five of six, including 39-17 at Miami last week coming off the bye.

The defense has been the biggest problem, especially against the run. The Dolphins were the third team in the last six games to rush for at least 195 yards.

“It’s always about desire, who wants to step up and really make a play,” Garrett said. “It’s you vs. another man usually … you have to strain to finish and get in there and make that play no matter what the opposition is.

The Browns need to start stringing victories to keep the playoff hopes alive, especially with suspended quarterback Deshaun Watson set to return to the lineup Dec. 4 against the Texans. Despite the struggles, losses and difficult road to the postseason, the Browns insist they haven’t given up hope.

“If we play our game and we execute and play well, we can beat teams in this league,” All-Pro left guard Joel Bitonio said. “And I think there’s a pride in the group, too.

“I have all the faith in the world in this locker room and the coaches, the work these guys put in. We understand the Bills are a great team, so it’s gonna be a huge challenge for us. But we have faith in ourselves.”

“Still very confident towards going to Detroit and getting that win,” Garrett said.

Jacob Phillips on mend from ‘crushing’ torn pectoral injury, hopes to leave injuries in past
Myles Garrett after latest loss: We are too good of a team to have this record