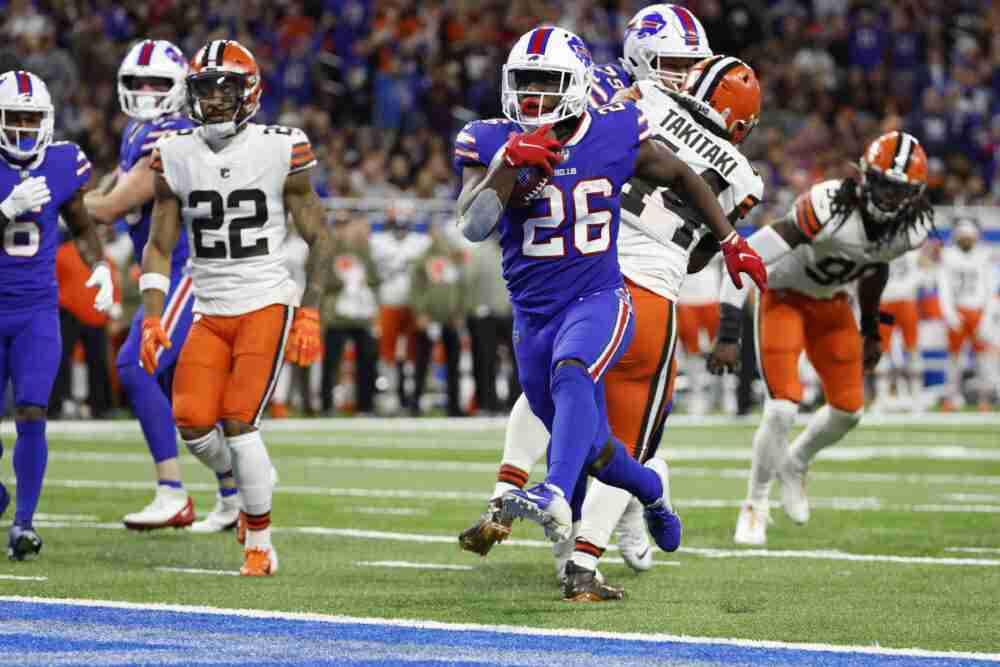 DETROIT — Not a single snowflake fell. The footing was fine and the ball dry inside the climate-controlled dome of Ford Field.

The Browns still stumbled, fumbled and bumbled their way to a sixth loss in seven games.

They made too many critical mistakes Sunday in a 31-23 loss to the Buffalo Bills.

The Browns led early, had chances to expand it, then opportunities to rally. They squandered them.


It’s the story of the season.

Cleveland fell to 3-7 after a 2-1 start and is on the verge of being completely out of the playoff chase. As it stands, it may need to win the final seven games to have a chance.

“Keep on winning and keep on stacking. That is still the idea,” All-Pro defensive end Myles Garrett said. “That is not going to change. We still feel like we can do so, but we have to put in the preparation and have that level of detail to match that excitement and that energy we have with wanting to do it.”

At least the Browns didn’t get stuck in the snow.

The game was moved from Buffalo after a storm dropped more than 6 feet of snow on western New York. The crowd was large — 52,146 in the 65,000-seat dome — and loud for both teams, with Bills fans outnumbering Browns fans in their “home” game.

The Browns scored on their first possession — that hasn’t been a problem — and had the chance for a 14-3 lead in the second quarter, but tight ends Harrison Bryant and Pharaoh Brown dropped passes over the middle that would’ve been touchdowns. Cade York’s 32-yard field goal made it 10-3.

“We have to come away with seven points there versus a good football team. We can’t do that,” coach Kevin Stefanski said, adding it was “obvious” the passes should’ve been caught.

The Browns had another chance to stretch the lead after a Garrett sack of MVP candidate Josh Allen forced a punt.

The Browns went on another promising drive, but Jacoby Brissett fumbled a snap from backup center Hjalte Froholdt on the Buffalo 47-yard line. Froholdt replaced Ethan Pocic, who left on the first drive with a knee injury and didn’t return.

The Bills (7-3), who had lost two in a row, turned the turnover into a 36-yard field goal. Tyler Bass ended the afternoon perfect on six field goal attempts.

The loss of Pocic may have been a factor in another turning point.

The Browns trailed 13-10 at halftime after a 5-yard touchdown pass from Allen to wide-open receiver Stefon Diggs running across the back of the end zone with 14 seconds left. It was the only target in the half for Diggs, who entered with 72 catches on 99 targets.

The Bills got the second-half kickoff after winning the coin toss and deferring. Bass kicked a 56-yard field goal for a 16-10 lead.

The Browns drove to the Buffalo 27-yard line with the chance to move in front. On third-and-1, Brissett lost ground on a sneak. Stefanski called for another sneak on fourth down and Brissett was stopped short.

Brissett had been stopped only once on a sneak this season, but that was with Pocic in the middle of the line.

“The first one, I just didn’t get a good read on it,” Brissett said. “The second one, I thought I got it but I didn’t get it. I just have to find a way to get those like I always do.”

The Bills took over and needed only four plays to go 73 yards for a touchdown. Devin Singletary ran 5 yards for the score and a 22-10 lead.

As the Browns sputtered on offense, the Bills got rolling. The Browns had 10 points when the Bills had no first downs and 12 yards but that changed dramatically. Buffalo scored on seven straight possessions until ending the game in the victory formation. The Browns entered the game 31st in points allowed (26.4 points a game) and got worse.

The Bills entered as the second-best scoring offense (27.8 points) and managed to eclipse that despite a pedestrian performance by Allen. He was inaccurate early and finished 18-for-27 for 197 yards, a touchdown, two sacks and a 100.4 passer rating. He rushed three times for 7 yards.

The damage was done by the running backs, a recurring theme for the Browns defense. Singletary and James Cook ran for 86 yards apiece, as the Browns gave up more than 170 yards rushing for the fourth time in the last seven games.

Any chance for a Cleveland comeback effectively ended on the ensuing drive.

Bryant was open in the back of the end zone, and Brissett avoided pressure, reset his feet and fired. Bryant went up to make the grab but couldn’t get his second foot down inbounds. York’s 34-yard field goal was blocked by DaQuan Jones. York’s had three kicks blocked in 10 games, with the others from 60 and 53 yards.

The Bills did a great job stuffing Nick Chubb on the ground and making the passing attack beat them. It’s the second straight week the Browns struggled to run the ball.

This time was worse, as Chubb was held to 19 yards on 14 carries, a 1.4 average. His long was 12 yards and he had six attempts that lost a combined 18 yards. He caught three passes for 48 yards.

“We all expect better,” Stefanski said. “We have to run the ball better. When we are not running the ball well in early downs, it obviously affects your game. We have to look at it and have to get it fixed.”

Brissett said the Browns were to blame.

The Browns played well early and more than held their own with the Super Bowl favorite Bills but couldn’t sustain the success.

The opening script produced a nine-play, 75-yard touchdown drive and a 7-0 lead. Brissett, who made his second-to-last start before the return of Deshaun Watson from an 11-game suspension, converted a third-and-11 with his legs and another with his arm before finding receiver Amari Cooper for a 25-yard touchdown.

Cooper added a 7-yard touchdown late in the fourth quarter. He had eight catches on 12 targets for 113 yards and two touchdowns a week after three catches on three targets for 32 yards.

Brissett led a pair of late touchdown drives and finished 28-for-41 for 324 yards, three touchdowns and a 116.3 passer rating. An onside kick attempt in the last 20 seconds hopped into the air, giving the Browns a chance to recover, but the ball went off safety Ronnie Harrison Jr.’s hands and out of bounds with 17 seconds left.

“Really tough,” Harrison said. “It was a good kick by Cade, but you know, the guy kind of got his hands on it. So I just tried to snatch it away from him, but it kind of got away from me at the same time. Just tried to make a play.”

The Browns’ season began to fall apart when they blew a 13-point lead to the Jets in the last two minutes in Week 2. They hoped to save it with a miraculous rally of their own.

“The guys fought. We never gave up,” All-Pro left guard Joel Bitonio said. “We were talking on the sideline like we can be the Jets here, we can make a comeback, and we were pretty close.”

They’re still holding out hope the season can be salvaged.

“We could go and win seven straight, easily,” Cooper said. “Get that first win first and then stack them up.”

“We are not out of it,” Garrett said. “If we do what we are supposed to and get rolling, then we still have a way to make it. We just have to keep that in mind and keep that in the forefront.”

#Browns Myles Garrett says they still have chance to get on roll despite losing game he termed must-win. pic.twitter.com/kfWzTfV63y