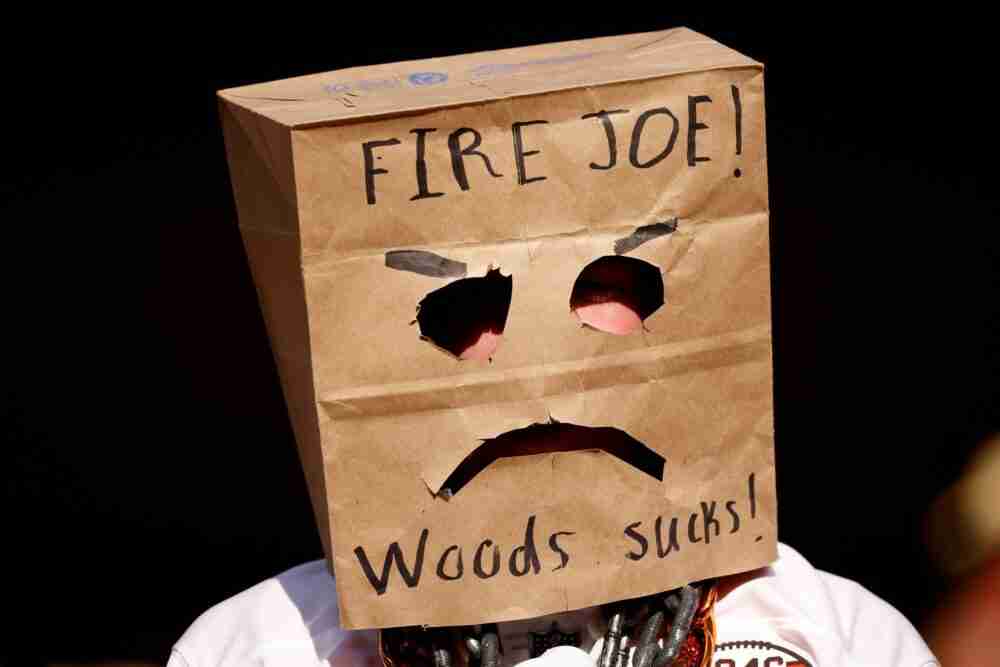 A: I’d probably stop just short of “no way” but agree the Browns will be looking for a defensive coordinator in the offseason. I don’t see anyone on the current staff being promoted to the role, which makes your question tough to answer.


I don’t expect this to happen but am intrigued by the idea of Mike Zimmer. He was a longtime successful defensive coordinator and then coach of the Vikings from 2014-21, where he was Kevin Stefanski’s boss. I’m not sure Zimmer and Stefanski agreed on offensive philosophy, but Zimmer’s a proven commodity and would add fire to the defense if he still wants to coach at 66 years old.

As for the other side of the ball, I don’t think Stefanski is going anywhere and I don’t think he’s going to give up the play calling.

Q:
Do you think the Browns should trade Myles Garrett … it would free up money and get a couple draft picks back. Browns just not getting the production from him the contract warrants?

I think Garrett gets a bad rap from some fans and media. He’s ninth in the league with 7.5 sacks despite missing a game after the car accident and then dealing with injuries caused by the crash. He draws more double and triple teams than any pass rusher in the league, yet still gets to the quarterback. He’s also convinced me how much he cares about winning and bringing a championship to Cleveland. On top of that, elite pass rushers are incredibly hard to find. The Browns never had one as talented as Garrett, as evidenced by him already owning the franchise sack record with 66, so he would be nearly impossible to replace.

You’re not alone with your thought — I was asked the same thing at a party Thursday — and I understand the desire to replenish the stash of draft picks. I just wouldn’t do it by dumping Garrett.

Q: How many new defensive starters will we see next season. I expect 6 or more, and that doesn’t include the new DC.

A: Give me the under. But not by much.

Two new tackles look like locks. I also see an end to replace free agent Jadeveon Clowney and two linebackers to join Jeremiah Owusu-Koramoah. I’m predicting status quo in the secondary but can certainly envision a change at one of the safety spots. That would require the front office to give up on former second-round pick Grant Delpit or big-money free agent John Johnson III.

The new defensive coordinator could have an impact on personnel, increasing the number of changes.

Q: If the season spirals way out of control (losing a majority of games that are left), will Stefanski be coach next season?

A: This is probably the most important potential question facing the organization.

A lot depends on how the team looks once suspended quarterback Deshaun Watson returns to the lineup Dec. 4. Wins are obviously important, but if the offense begins to perform like the Browns envisioned with Watson — the first elite quarterback in Stefanski’s tenure — even in losses, I think that would be more than enough for him to keep his job.

I don’t get a sense the organization wants to move on from Stefanski despite the struggles of the last two seasons, but I’ve seen ownership fire five coaches in a decade, so I’d never rule out anything.

Q: What kind of impact has Deion Jones had since joining the Browns defense?

A: He’s given the Browns a proven middle linebacker after season-ending injuries to Anthony Walker Jr. (quadriceps) and Jacob Phillips (pectoral), which is hugely important.

As for his performance, he’s made some good plays but hasn’t made a major impact. He’s still learning the system and getting comfortable, which is why Jordan Kunaszyk has received playing time off the bench in his spot.

Q: How likely is a new stadium within the next 10 years, and any chance they will keep it open air? (Like they should.)

A: A new stadium is definitely coming and the 10-year timeline is interesting. Bureaucracy can slow down any project, and if the stadium is part of a broader lakefront development, it could take more than a decade. If I had to pick a year, give me 2030.

The dome question is fascinating. A city and team can host many more events with a dome. I also know the strong feelings of many in the fan base about keeping the elements a factor. And there’s the recent push by the NFL Players Association to ban certain types of artificial turf. With all that being said, I’m guessing it’ll end up a dome.

Q: We hear the mantra “we have to do better” after every painful loss as if 100 percent of the Browns’ problem is poor execution of brilliant strategy, but the team seems very obstinate when it comes to actually admitting strategy needs to change. Our leadership claims they “evaluate themselves constantly” but are they willing to really look in the mirror?

A: It’s a fair question. I believe them when they talk about extensive self-scouts and the willingness to adapt, but agree any major changes seem nonexistent. I think they have strong beliefs in their systems and concentrate on tweaks rather than overhauls.

Q: Should we expect to see the DEs, who appear to be the best DL, moving inside, especially on passing downs?

A: It’s all about the right down-and-distance. If the offense is in an obvious passing situation — third-and-5 or longer — the Browns want to go with at least three ends. That allows Garrett or Clowney to slide inside for what could be a favorable matchup. The return of Chase Winovich from injured reserve for today’s game should lead to more of this package.

Mailbag: Will Browns try to re-sign Jacoby Brissett?
Mailbag: After a lost season, could ownership make changes at the top?